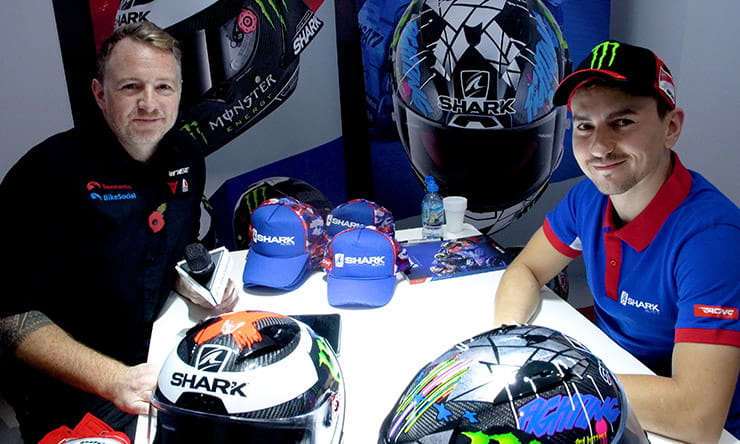 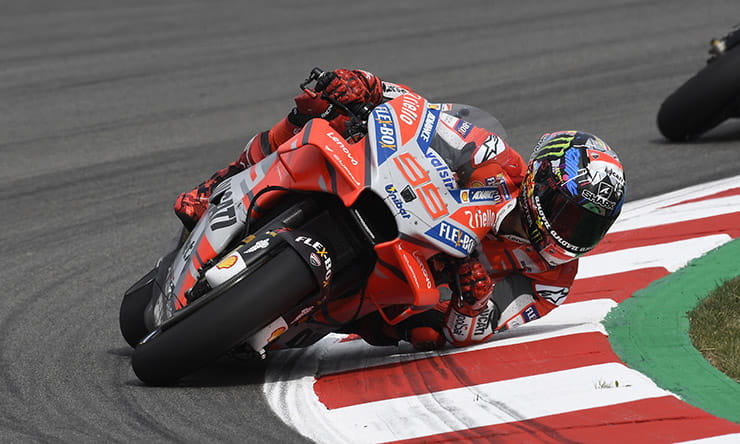 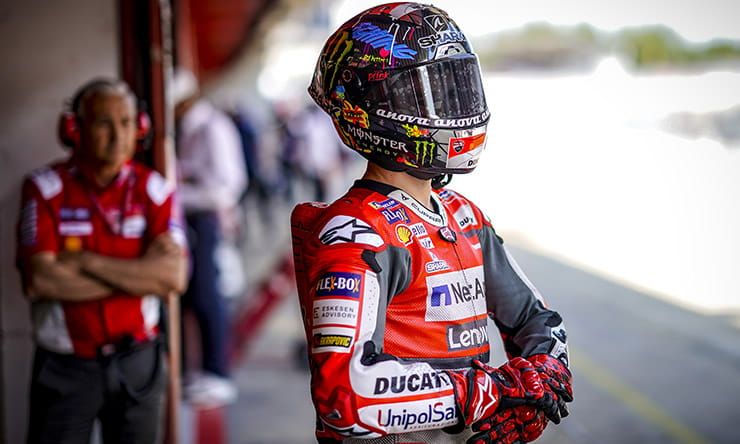 Over in Milan at the annual EICMA motorcycle show, Shark helmet ambassador and three-time MotoGP world champion, Jorge Lorenzo, freed up five minutes of his busy schedule to speak to us about how his injury is ahead of the final round of the 2018 season at Valencia and how he described his second and final year with Ducati. Plus, why he chose Shark helmets, how he influenced their aerodynamic design and then how a Brit pop band helped his helmet styling.

Check the interview right here, and the transcription below:

BikeSocial: First things first, I’ve got to ask you about your injury, how is your recuperation going?

Jorge Lorenzo: It’s coming better. It’s been more slow than I imagined, than I expected. I’ve been unlucky because I injured myself just in the external European races so I’ve lost five races, so (that makes) six races without any points. Very unlucky situation.

Now that I had the operation, the Arthroscopy, the wrist is recovering quite fast so I think in Valencia I will not be 100%. I think 90%, so I will be able to compete.

You’ve had a season of highs and lows; 3 wins (same as your team-mate) but, as you’ve mentioned, so many races without scoring points. How do you feel it’s been?

I think in general the season has been so quite inconsistent, ups and downs. So many zeros, some mistakes also, but for the opposite I also won three times. I’ve been very fast, finally, on the Ducati. I’ve understood the bike and have been able to push at the maximum and got some victories and pole positions.

So, yeah, very inconsistent season but finally I achieved what I wanted to do; to be competitive with another bike, with the Ducati. Very special bike, a very difficult bike but finally we made it. Unlucky at the end of the year but anyway, in general I’m very proud of the season and my speed.

One of the transitions for us, the fans, this year has seen your personality has been shining through your social media. Is this a conscious decision to be closer to the fans? Certainly with the recent tweet praising Valentino.

It’s the way that it is. When you grow up you and you evolve yourself you change, it’s normal. Everyone improves in some areas, sometimes you get worse! But normally you get better and probably I became more open and understood certain things that when I was younger I didn’t.

I’ve always been very honest, that’s one of my better and worse things of my personality. I’ve been very honest and very direct. I always say what I think. And I thought at that time that Valentino made a great race, so I just wrote it on Twitter. He was so constant, it impressed me very much because he was 10 or 15 laps in the same tenth. This is very difficult to get with a motorcycle at a race track of more than two-minutes and it was my honest opinion.

The helmet in front of you is the special edition from your Catalunya victory but the spoiler on the back, it was your idea, right?

This is the winter test edition with the spoiler, this is the first time the spoiler was in the market so some people can get the benefit of having the aerodynamics we have in MotoGP. When I arrived with Shark, the helmet was amazing, it was so good because I made a test one day with a street bike testing all sorts of helmets, all the brands. And finally, the one I prefer was the Shark helmet in terms of the safety, comfort, and ambition especially the vision. The vision was so big and so clear.

So I signed with them and from day one I started to think about what we could improve and one of the areas I wanted to improve was the aerodynamic because we didn’t have any kind of spoiler. So we introduced this spoiler in mid-2016, at Mugello, and I won the race. So it was a nice debut for the spoiler.

And we can’t go without talking about the special design of yours, the Catalunya design, can you talk us through the graffiti style, it stands out so much and there are so many messages on here too…

I’ve always been a big fan of the fluro colours. I love, for example, the Coldplay style that they have, some years ago when they launched the disc, they launch it with a lot of fluro colours and fluro style of that band so I wanted to do something inspired by that style on the helmet so that’s why in 2013 I launched for the first time the graffiti helmet.

Then, some years later with Shark, we mastered this kind of style with this kind of design with a completely different design and colours and we finally arrived at this graffiti helmet. I think it’s so nice.

Thanks to Shark Helmets for arranging the interview