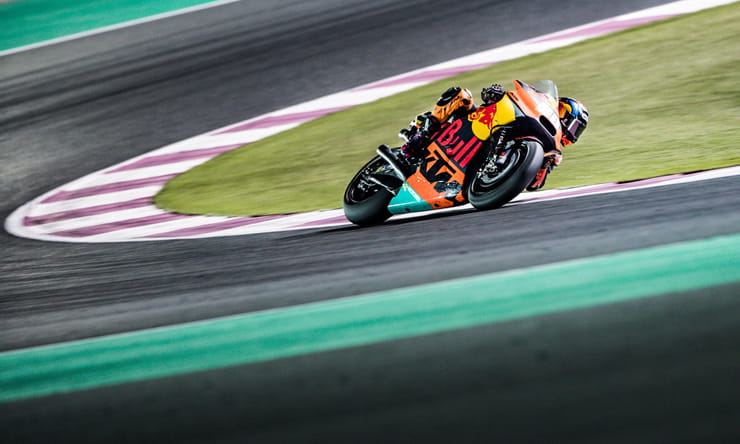 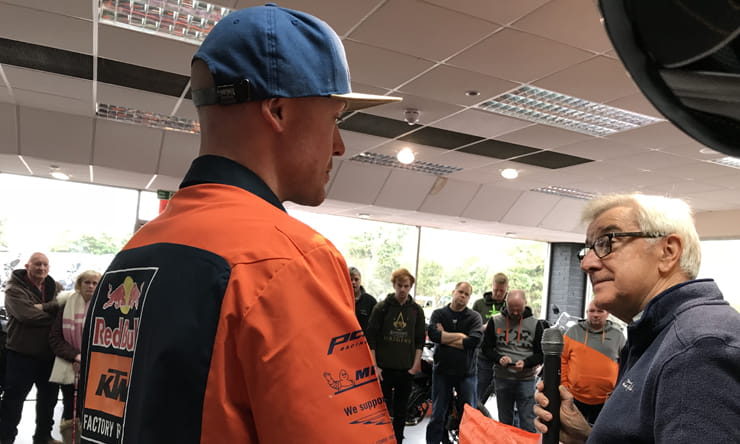 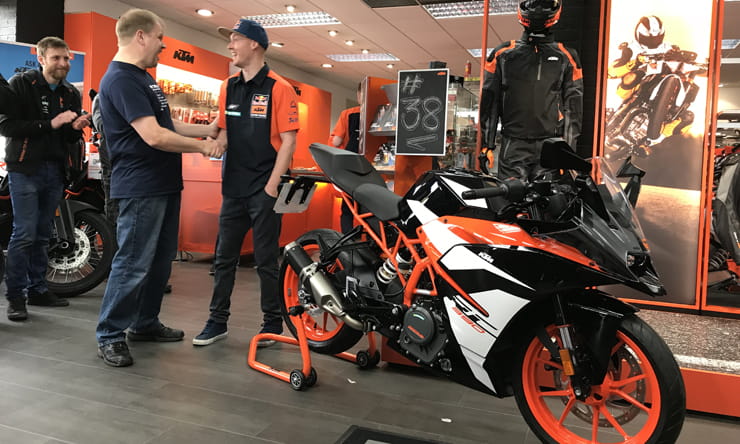 The Premier Bikes showroom in Adbingdon is packed, the queue at the coffee machine is as long as that you would see outside any nightclub on opening night. “Technical difficulties” the staff member in charge of dispensing the caffeine says with an awkward smile. But what had brought over 100 people to a KTM dealership on this wet and dreary Saturday morning? The chance to meet a MotoGP rider, that’s what.

As Bradley Smith steps out his car, the buzz in the room intensifies and focus switches from looking at new and shiny bikes to the guy stood in the drizzle, head-to-toe in orange.

He’s here to hand over a KTM RC390 to competition winner, Bruce Juniper. But, BikeSocial managed to prise Mr Smith away from his fans for a cuppa and a catch up, here’s what he had to say: 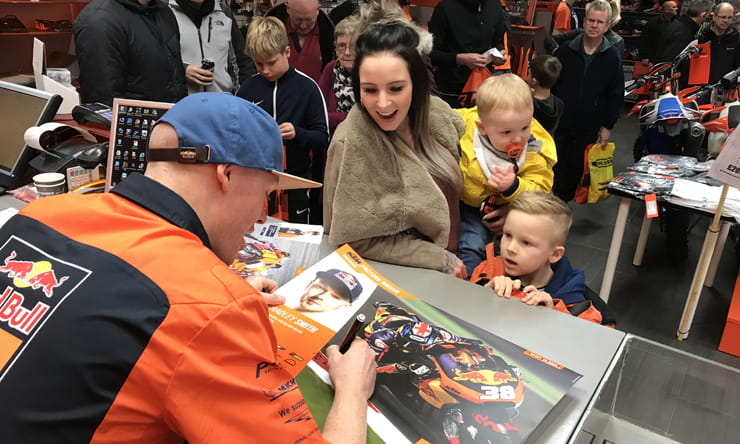 BikeSocial: As an ex-Tech3 rider what are your thoughts on the worst kept secret in MotoGP that Herve Poncheral and his team will next year be a full factory KTM outfit?

Bradley Smith: To be honest I think it was the perfect decision, I think it was a perfect move by KTM. At the end of the day the best satellite team for a number of years now for pretty much a decade has been Tech 3. As a satellite team, it’s a case of bringing riders from Moto2 riders like myself, British Superbike and World Superbike riders like Cal Crutchlow, James Toseland and Ben Spies, taking on (Andrea) Dovisiozo when he spent a year there and (Johann) Zarco now from Moto2, and really getting good results from absolutely everybody. I think it makes perfect sense, they have a wealth of experience in that team, a wealth of knowledge which is heavily based around the Yamaha because of the amount of years they have been together but there’s no reason we can’t bring them up to speed with the KTM.

Four bikes instead of two is always better, especially if we can get two fast competitive riders on those bikes, that data will help the speed of the project for the reaming three years of the contract with KTM in MotoGP.

You spoke then about having a Moto2 and the MotoGP team. KTM have bikes in every class of Grand Prix motorcycle racing, Red Bull Rookies, Moto3, now Moto2 and MotoGP. Is that the way to go if you want to nurture riders into MotoGP?

Yeah I mean if you look at what happened with Marc Marquez, Pretty much his own team with Repsol they brought them though and put the pieces in place. Look at what MarcVDS are doing with their Moto2 program and their associations with Estrella Galicia from Moto3 and Moto2. If you look way back to when Jorge signed with Yamaha in 2008 he signed a contract two years prior (to riding in MotoGP). Even Lewis Hamilton with McLaren they paid and brought him through. These places have been in for a while and I think, if you are going to invest so much money at a young age you want to be able to bring these riders through to MotoGP. For a brand to Introduce a rider to that path-way, that would be a perfect place for someone to go. And to jump in at any point you don’t have to be from Red Bull Rookies, it makes that partnership with a manufacturer much more appealing.

You won your first GP in 2009, if the Bradley of today could go back and whisper some advice into the ear of the young Bradley what would that be?

As bad as it sounds, it doesn’t mean anything. What I’ve learnt more and more is that until you do anything at MotoGP level then what you do back there is all just a process and a building step to where it is. Right then when you win your first GP you think ‘I’ve made it, I’ve cracked it’ but by the next race you realise that by the next race or two everyone has forgotten and just expects you to do it again. You might win in Qatar but if you don’t do it in Argentina people go ‘Who’s this guy’! It’s all just stepping stones to get you to MotoGP.

We have a lot of Facebook live in the pits, on board cameras. Is the amount of access fans get through Social Media, are you aware of that extra pressure?

To be honest you are oblivious, until you turn up to days like today where people tell you everything about your own life! I’m like ‘you know way too much about me and I have no idea about you!’ The fact that we can be brought now to people’s sofas on a Sunday in so many different dynamic ways is fantastic, it captures an audience in a good way. They love what they see and they love MotoGP, I think it’s a great time to be involved in this sport. It’s scary from a social media point of view, in terms of how much people can see and know (about you) but if you look around the world with surveillance and so one this has been going on a long time. That’s said in MotoGP its only beneficial, it captures a whole new audience and hopefully it captures the younger generation which is something that our sport needs to continue to survive.

Fellow Brit and former MotoGP racer from last year, Sam Lowes, is on the KTM in Moto2 this year. Two questions: is that the bike to be on and have you had a go on it?

I haven’t had a go on it and I do believe it is the bike to be on. Kalex were always going to make a step this year because of the strength the KTM showed last year, the domination they showed in the final three races of the season – not on with Miguel (Olivera) but also with Brad Binder. Kalex had a wake-up call.  They have certainly brough some new parts and a fantastic package to (Moto2) this year but, I do think that KTM are a team that’s developing and moving forward continuously.

You can’t sit still in racing then?

No you can’t, especially with someone like KTM even more so. They are just bringing things constantly. They understand and they know the need to develop and make things better. Sometimes they brought too much and tried to recreate the wheel and sometimes got too caught up in it. But they learn from those mistakes and refine it for the next year. They treat it like a project, like Formula 1 – it’s constantly moving on which is why they win.

This year we have to new rounds at Burinam. How do you prepare for that? You just mentioned Formula 1 where they have million dollar simulators and can practice the track day and night. Apart from on-boards is there anything else you can do as a rider to learn a circuit you haven’t been to before?

Prior to the (pre-season) test at Burinam I just studied the World Superbike races – you get a general feel for how you are going to attack the track. Pretty much how the WSBKs were riding was how I had to do it on my bike.

The WSBK and MotoGP are that close?

Within reason the general concept and idea is the same. There is some tweaking here and there we are talking 10cm to the right or left, we aren’t talking metres difference. It’s enough to give you a general understanding of how it all is and then it’s just laps and laps and laps and laps, just to figure it out – we don’t have simulators so we have to do it ourselves. Personally coming from a motocross background I think that’s better, that track changes every lap (in motocross) so you have to constantly be able to adapt to those new things. 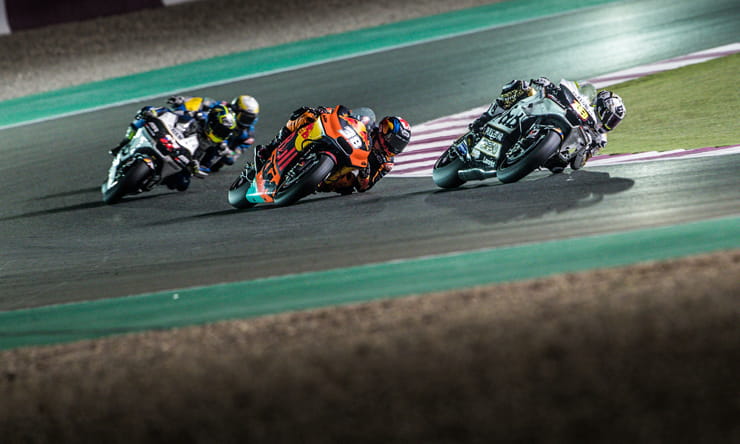 The KTM is the only bike in MotoGP that runs the tubular frame, what’s the biggest difference – from a riders prospective? Say, you were going through Maggots and Becketts at Silverstone how does the KTM frame differ, what’s that feeling you get?

To be honest I quite like the feeling I get from KTM frame for the reason it gives more feedback to the rider in terms of understanding where the front limit is – sometimes you wish that was dulled out a little bit! So you didn’t feel that you were SO close to the limit but in terms of developing and moving forwards I think it’s the perfect thing to have. It’s versatility is also extremely important in that it means that we can cut and shape and reposition different areas – specific to the needs at that point. If we need to stiffen a certain area if we need flex in a certain area. It’s easier to do that when you don’t have just one big aluminium piece. Also having your own suspension company in WP, they’re doing a fantastic job. Their HQ is based next door to KTM’s (HQ) and they build anything we want, from the ground up, specific for our bike as well. You know, maybe we need something the other manufacturers wouldn’t need. If you are with another (suspension) manufacturer you have to take the general package for everyone. We can be specific and the only way to win in this world is to be specific. All of those things are positive.

So do you think the WP suspension on the KTM is at the same level as the Ohlins units you have used previously?

Certainly the front forks, they have done a very, very good job. The rear shock, we are still working with. The fact that Michelin (MotoGP tyre supplier) have slowed the rate of progression of the tyre development for this year and fixed their tyre programme for the whole year now is gonna help us get the rear shock a little bit better.

So you can just focus on the rear shock without trying to figure out what’s the tyre and what’s the shock then?

Exactly, otherwise it’s smoke and mirrors. At least we know we are gonna get and that should help us make that next step in the rear grip / drive area. 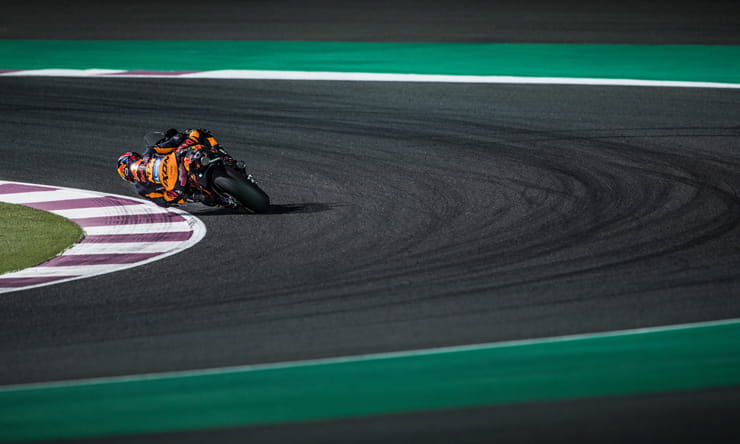 We have a Bennetts customer trackday at Donington, you’re welcome to grab the keys to a KTM 1290 Super Adventure, come along and scare some people in the fast group if you like. Do you have any Donington tips?

It’s narrow, when you get riding it all gets very narrow. The main thing about Donington that I like and remember is Craner (curves). As you get more confident during the day it’s like Corkscrew at Laguna (Seca). Every time you do it just makes you laugh. You come out of Redgate and its that change of direction and as you change direction you have to spot your marker down the hill and over the crest and then trying to bring the bike back across to Old Hairpin.  The most important thing for me with Donington is to not rush it, because it’s narrow and also the down hill in the beginning (of the lap) you can get behind yourself – you miss and apex, miss an apex and again – and then you use less track than there is available. Always think: ‘¾ track, pull it back over, ¾ track, pull it back over’. Rather than running out to the kerb and back over, you’ll never get there in time and always be out of sync. So rhythm I would say is the most important thing about Donington.

Many thanks to Bradley, KTM and Premier Bikes of Abingdon for inviting BikeSocial along.