Confirmed: Triumph to power Moto2 from 2019 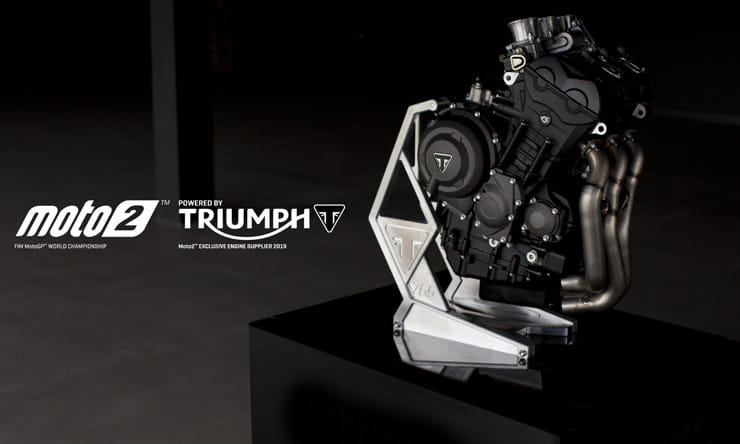 One of the worst-kept secrets of this year is Triumph’s deal to power Moto2 bikes after Honda’s contract to supply engines comes to an end at the end of 2018. As early as January the rumors of the Triumph engine supply were already a hot topic in MotoGP.

Now Triumph has made the official announcement to confirm that it is indeed to supply all Moto2 engines from 2019. The three-year contract will see the British firm providing race-tuned versions of its latest 765cc triple to teams in the Moto2 class. Based on the motor in the 2017 Street Triple, the Triumph triple is already a race-proven design, with an earlier version winning races in several championships when it powered the Daytona 675R.

To tune it to race spec, the Moto2 triple will gain a unique cylinder head with new porting, plus titanium valves and stiffer valve springs to help it rev higher. A low-output alternator, a race-spec slipper clutch and a race-only Magnetti Marelli ECU will also be added, along with a taller first gear, a new sump and slimmer engine covers.

In road-going form the 765cc engine makes 123PS at 11,700rpm, but the Moto2 version should be significantly more powerful. No figures have been released, but we’ve already had a preview of a Moto2-spec Triumph-powered machine in the form of the Spirit GP, a 140kg creation with a claimed 180bhp.

A prototype has been taking part in this year’s British Supersport championship, albeit with a smaller, 675cc engine making less power. 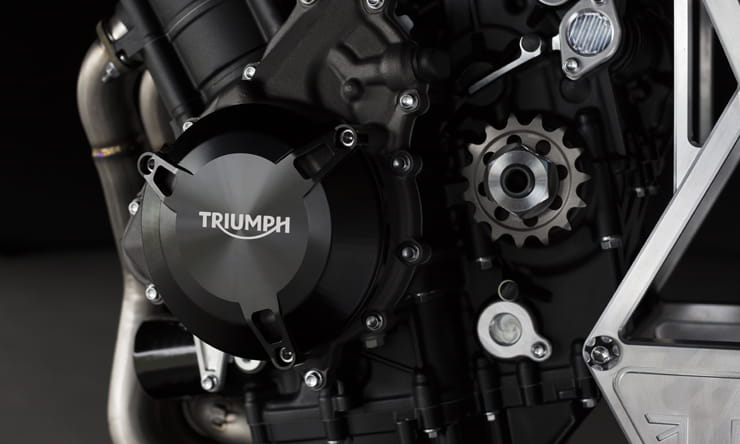 The engine feels strong and in particular the mid-range is very impressive.
Julián Simón - 2009 125cc World Champion & 2010 Moto2 Runner Up

The firm’s chief commercial officer, Paul Stroud, said: “This is a significant moment for Triumph that brings an exciting new chapter to our 110-year racing history and builds on our celebrated TT and Supersports race winning triple engines. We look forward to a long and thrilling relationship with Dorna and the Moto2 teams, riders and fans.”

Carmelo Ezpeleta of Dorna confirmed the deal, saying: “We are very excited to be working with one of the world’s most iconic motorcycle brands. The Triumph triple engines are renowned for their strong, linear power and torque delivery and have achieved many successes on the track making them the ideal choice for the Moto2 Championship. We are looking forward to the 2019 season and the beginning of a new generation of Moto2 in partnership with Triumph.”

Herve Poncharal, President of IRTA: “Moto2 is a key category in feeding talent into MotoGP. We’re seeing a lot of top riders in MotoGP all come through the intermediate category. The arrival of Triumph as the sole engine supplier and with new ECU’s in the intermediate class, marks a new era that is sure to prove another incredible step in its evolution, making it remain the ultimate category on the way to MotoGP.”

The new engines will be prepared by ExternPro, the same Aragon-based firm that currently builds theCBR600RR-based engines that have powered all Moto2 bikes since the championship’s introduction in 2010. Its technical director, Trevor Morris, said: “It is incredibly exciting to be working in conjunction with the iconic Triumph motorcycle company in supplying engines for the Moto 2 world championship. I have been a fan of the triple engine for a long time, its unique characteristics and performance will ensure and enhance the future success of the championship.”

Engine testing has already been underway, with 2009 125cc world champion and 2010 Moto2 runner up Julián Simón at the helm. He said: “The engine feels strong and In particular the mid-range is very impressive. The feel between the throttle and the rear wheel is very direct and controllable. The general feeling is very good and the engine already shows great potential.”

Reading between the lines of the Triumph Moto2 engine deal, there are further implications for both the Moto2 class and the waning category of 600cc road-going supersports machines. One is that Honda’s departure appears to be further confirmation that the company has no plans to replace its CBR600RR, which doesn’t meet the latest European emissions standards.

Triumph has also shown no sign of replacing its existing Daytona 675 – the only fully-faired sports bike in its range. Like the CBR600RR, the Daytona isn’t Euro4-legal and is currently sold in Europe under derogation rules designed to allow old stocks of non-compliant models to be cleared. The move to Moto2 could be interpreted as a spark of hope for a future Triumph sports bike, but it’s perhaps more likely that the firm’s move to the series is a calculated decision to retain a strong motosports connection while allowing it to stop producing its own, slow-selling, race-replica road bike.

In racing terms, the fact that Moto2 is moving on to a 765cc triple with the potential to make significantly more power and torque than the current 600cc four-cylinder engines means that chassis manufacturers will have to start from scratch to create new machines to house the engines. The Moto2 class will also now represent a much larger step up from the 250cc, single-cylinder Moto3 machines in its feeder category, moving closer instead to the top line MotoGP category in terms of power. Criticisms that the class is too similar to the production-based supersports category that supports WSBK can also be dismissed with the selection of the larger, three-cylinder Triumph engine.