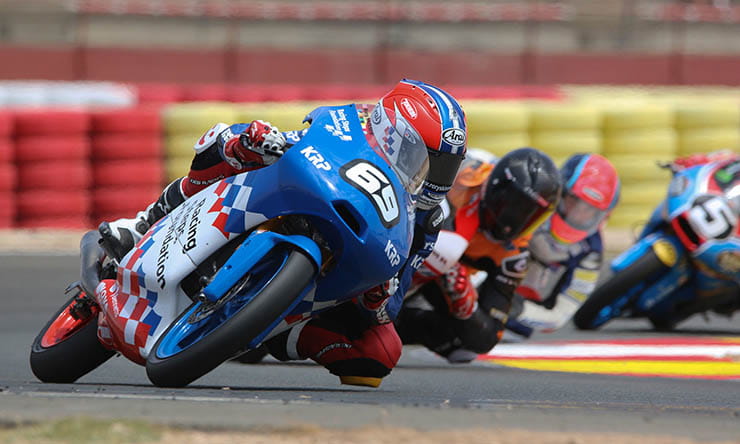 Jones and Skinner will race for Mark Keen’s KRP squad, which will benefit from upgraded equipment for 2017. Having run Skinner on aging FTR-framed KTMs for the past two seasons, the Bedfordshire-based outfit will have 2016-spec factory KTM RC250Rs for their shot at the primarily Spanish based series. In addition to racing in the eight round junior world series, Jones and Skinner also have entries in the prestigious Red Bull MotoGP Rookies Cup.

The news that Britain will have three riders in the Grand Prix feeder series comes weeks after news that MotoGP organisers Dorna are set to invest in British youth racing. The Spanish-based organization is in the final stages of developing a talent programme that will see the introduction of the British Talent Cup in 2018, which will ultimately see Britain’s best youngsters fast tracked into Moto3 with the new British Talent Team.

Speaking about the season ahead, Skinner said: "Having served a two-year apprenticeship in both series thanks to the backing I get from the Foundation, I know I have to hit the ground running this year in order to fulfil the promise that the RSF, Dorna and many others see in me.”

Jones, who last year won the British Moto3 standard class with 16 wins and 20 podium finishes added:  "This is a fantastic opportunity for me. I can't thank the Foundation enough for the faith they are showing in me. Clearly it's going to be a really steep learning curve for me stepping up from racing on British circuits in national series to competing on Grand Prix circuits in Europe in the Junior World Championship.

"Fortunately, having raced in the Moriwaki 250 Junior Cup in 2014-15, I have competed on some of the GP circuits I'll be visiting this year. Nevertheless I'll be looking to listen and learn from the likes of Mark Keen and Rory."

RSF motorcycle racing co-ordinator Peter Ball added: "It's good to know that Dorna is now joining the RSF in the quest for talented British juniors which The Racing Steps Foundation started back in 2009. To date the Foundation has borne all the costs of training, developing and managing British youngsters en route to the doorstep of Grand Prix racing due to a dearth of interest from other potential British sponsors.

"So it's welcome news indeed that Dorna is starting to research the possibilities for an expansion of motorcycle racing in the UK to help nurture the potential Grand Prix winners of the future."

The Junior World Championship kicks off in Albacete, Spain, on April 30.