Can Maverick be top gun in Misano? 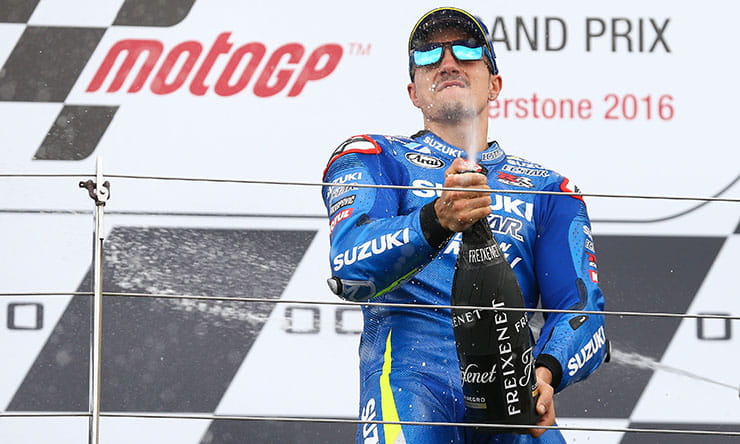 After one of the most exciting MotoGP seasons we’ve seen for some time, the circus heads to the beautiful Adriatic Coast and the Misano World Circuit Marco Simoncelli for round 13 of the championship this weekend.

Moving into the final third of the championship, we’ve seen a change in fortunes for some of the leading protagonists and an emergence of riders who have been very willing and more than able to take the fight to the front.

We’ve seen four first time MotoGP winners this year, with 2013 Moto3 champion Maverick Viñales making the breakthrough last time out. It was the first dry weather win for Suzuki since Kenny Roberts Jnr stood on the top step of the podium at Motegi in 2000.

The 21-year-old moves to Yamaha next year but his partnership with the GSX-RR is getting stronger every race. Although the stop-start nature of Misano has not historically suited the Suzuki, the Spaniard’s momentum means that he should be in the hunt for more podium places this weekend.

He said: “I’m still enjoying the happiness for my first MotoGP victory and also the first for Suzuki recently. The last race at Silverstone has been simply perfect, this as a result of the excellent job we have done as a team. Although I like Silverstone, and I had good feelings for the weekend, winning a MotoGP race is never an easy thing, and it came because both me and the bike have improved a lot, both in this year-and-a-half and also over the weekend in the UK. I feel comfortable and confident, my crew and the factory are supporting me with their best efforts and the victory is a reward to our job. After such an emotional weekend it is good to go immediately racing again and I will exploit this enthusiasm as a further push in Misano. The circuit is a good one, but also the GP is always emotional for the people and the supporters; last year was an amazing scenario and I hope we will feel the same affection this year.”

The cold war between MotoGP world champions Valentino Rossi and Marc Marquez was re-ignited at Silverstone as a hard-but-fair battle raged for much of the race. Afterwards Rossi said, “Marquez is always very aggressive for sure, but compared to the Sepang battle this was a lot different because both riders have the same target – try to arrive in front and try to go faster.”

Rossi then made reference to Marquez’ alleged previous agenda of trying to help Lorenzo to the 2015 title, “[I feel more worried] when I have Marquez, because I know that he has special treatment with me! But also with Iannone, it is not easy. It was a great battle with Iannone and also with Marquez – it is always a strong battle, but fair.”

With Misano only a stones throw away from Rossi’s home town, as well as those of compatriots Iannone and Dovisiozo, expect a fierce partisan crowd with nothing but an Italian win on their minds.

Marquez leads the championship by a massive 50 points, having enjoyed a point scoring finish in every round so far, including nine trips to the podium. He also topped the podium at last year's race, which was run in mixed conditions.

Cal Crutchlow heads to Misano on the back of a phenomenal run of results, after a second place in Sachsenring, his measured ride to a historic 35-year drought ending win at Brno, and the pole-to-podium at Silverstone. His upturn in form attributed to finally getting to grips with the notoriously hard to handle Honda.

The 30-year-old is the top placed satellite rider in the world standings, in eighth, is just 10 points behind sixth placed Andrea Iannone on the factory Ducati.

With Bradley Smith again missing through injury, his place on the Monster Tech 3 Yamaha will be taken by fellow Brit Alex Lowes, who impressed with 13th place as a stand in at Silverstone.