Bradley Smith on his horror injury: "I didn’t want to end six fantastic years with Tech3 sat on a hospital bed" 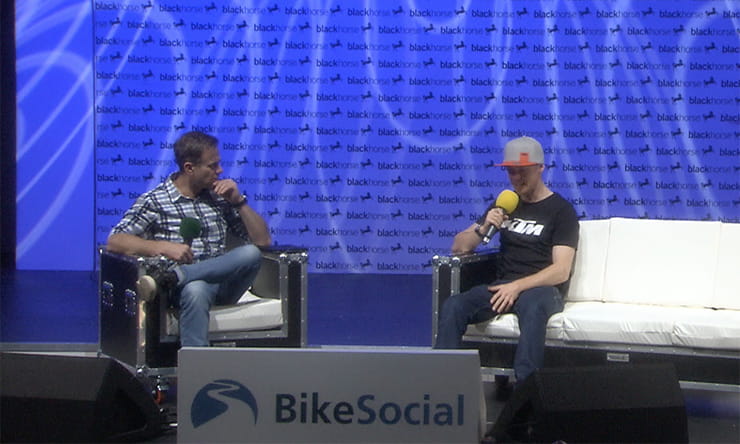 At Motorcycle Live 2016, James Whitham interviewed the stars of the motorcycle world and not many are bigger than factory KTM MotoGP rider, Bradley Smith, who spoek about his horror injury, the Yamaha's Michelin struggles, how he signed for KTM and why the future is bright...and Orange.

Here's the interview in full with the transcript below:

James Whitham (JW): It’s been a testing year for you, this, Bradley

Bradley Smith (BS): It has, oh man this season, Jesus! I’m back from my test which was a couple of days ago with KTM but yeah if we start from the very beginning of the season, it has been very testing. It was just one of those things, one of those things that didn’t quite go right. We didn’t adapt to the Michelins, the bike that we were on.

JW: What is the problem, what is the difference between the Bridgestones and the Michelins, what do you feel when you’re on your bike?

BS: So, I basically there was no front feeling, there was no front contact, there was constant front crashes, you didn’t want to crash, you kept on hurting yourself. You know throwing these things down the road hurts. It bloody hurts. I know that. I was coming from such a good season in 2015, everything was going so well but there was such a massive drop off, that feeling, that sweet spot had completely disappeared. I was struggling around for something maybe that just wasn’t there. I was looking for a Bridgestone feeling with the Michelins. One thing led to another and maybe we got over technical with things and kind of went down a garden path that didn’t quite work. Things seemed to be getting better, I seemed to be getting back onto the pace then I got myself run over at the Oschersleben for the 24-hour race.

JW: This wasn’t even your day job, this was a weekend off, a bit like a busman’s holiday. You were doing a world endurance race?

BS: I decided to miss Suzuka this season (the endurance race) because of the travelling and the commitment of flying back and forth to Japan. Broc Parkes, my friend and pretty much my neighbour over in Andorra, he said, ‘Hey listen Brad, I’ve got a chance to become World Champion, any chance you can come and help me out?’ and I was like ‘Right, where am I gonna be?’ I was in Brno, about 400km from Oschersleben, and I’m like right I’ll be there (Brno) Monday, I’ll drive Tuesday and we’ll be on track Wednesday. Wednesday went super good, we were top, we were fastest by a good chunk, everything was going well, all three riders were doing great. And yeah, an unfortunate situation I went out of Thursday morning in free practice. I had a coming together with a guy, he wheelied out of the corner, got a bit off balance, lent over on me, hit my front brake and I went down. Two or three guys missed me but another guy just got a little bit unsighted and ran straight over my leg. You know the little spikes on Endurance bikes, they have little hook on the front forks to get the paddock stand in, that went into the back of my leg and ripped a massive hole in the back of my leg. Then by running over my leg, my leg kind of spun-up in the wheel so then I did my internal and external cruciate ligament as well and then I had spiral fractures of my femur and tibia so I was in a right mess.

BS: Yeah, you know it was supposed to be a 6-month accident but I got back on a bike in Japan in 7 weeks but I wasn’t in any shape to ride but damn right stubbornness told me that I’m going back and I’m going back to ride. So the last three months has just been a case of suffering through everything, getting through the end of the season. I didn’t want to end six fantastic years with Tech3 by sat on a hospital bed or sat on my sofa watching at home so I cut that out and I was like ‘it doesn’t matter what pain I’m in, I’m going to ride’ and got myself as fit as I possibly could for the last two test that I’ve done with KTM and looking to that new project, hopefully luck will change around and I’ll get back to full fitness and we’ll start on a positive note.

JW: You’ve obviously been on the bike and this is going to be a big challenge?

BS: My dream has always been to be a factory rider. I got to a point in 2015 where I was best satellite rider week in, week out. And we were looking for that next step. KTM came along last December and called me out of the blue and said ‘What are the chances of a meeting?’ I sat down with them in January and knew within 5-minutes that I wanted to be a part of the company I called my manager and said ‘Listen, we need the job but we’ve got to play it cool, we need good negotiations but I want to be a part of the project.’ We announced it in March and we’ve just been waiting for it to happen. The bike’s in a great spot, all the test riders, they’ve had Mika Kallio this year, Tom Luthi, Randy de Puniet, Karel Abraham, they’ve all done a great job through the season and it’s still got so much to do because you don’t know how blessed you are when you’re in a satellite team because there you’re taking last years’ stuff that’s last years’ factory stuff that works. Right now, we’re taking a factory bike that has no information, no data. Things as simple as gearboxes – which gears for which corners. Do we need to have higher rpm or lower rpm? Then it’s engine braking strategy and traction control and that’s even before we start looking at chassis settings and suspension so it’s certainly a big job. My head is completely full of ideas of things that we need to improve. We’ve got a couple of months off but KTM are going to do another couple of tests, to do some extensive testing with Mika Kallio during that period and I’ll get to ride the bike again, which will be a new bike, in Sepang at the end of January.

JW: At 26, you are already one of the most experienced MotoGP rider so you can develop a bike?

BS: It’s something that I enjoy and it’s something that, you know, everyone’s always said that I’m quite technically minded from that side. This season’s actually been a blessing, although it’s been a disaster for me in terms of results and performance, I’ve learnt an awful lot moving from the Bridgestone to the Michelin. I’ve learnt what not to do with the Yamaha to make that work and I hope that all this negativity of the last eight months can basically help make the project go even faster with KTM.