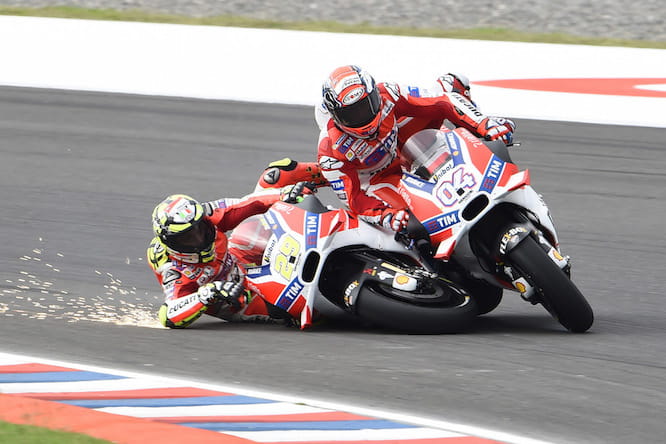 The Argentinian Grand Prix should have been an occasion for celebration for Ducati Corse, who looked set to take their first double podium since Qatar last year.

Both Ducati riders, Andrea Dovizioso and Andrea Iannone, had passed Valentino Rossi and were on course to finish second and third, until Iannone decided he wanted to reverse the order at the final corner, only couldn’t quite make it and binned it taking his team-mate with him.

Race direction handed the Italian a three place grid penalty for the next Grand Prix and issued a penalty point for his race licence. While Ducati have said they will appeal this decision, Sporting Director Paolo Ciabatti was less than impressed with the situation.

Had Dovizioso finished second, he would be second overall in the championship fight just one point behind title leader Marc Marquez.

“Obviously it’s a big disappointment,” said Ciabatti. “Iannone was trying to get a better position and didn’t do it on purpose but riders must consider the interest of Ducati and the championship as this podium would have been very important for us.

“We’ll talk to the riders on Thursday in Austin to let them know what we expect between them in the race." 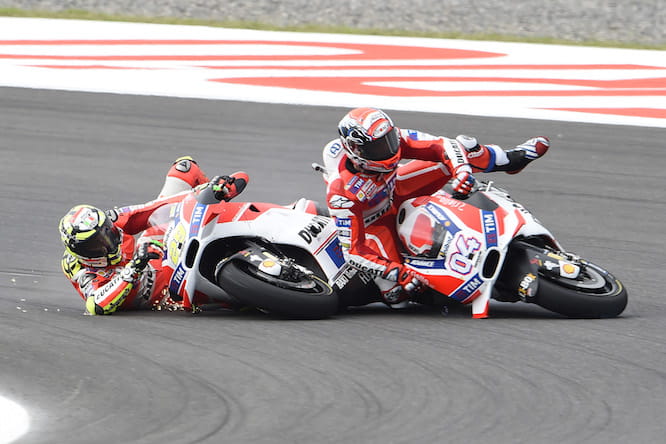 Dovizioso remained diplomatic about the situation, touching on the positive side: “I’m very disappointed because we worked really well. We would have been able to finish second, which would have meant second in the championship one point behind Marquez. That’s the positive thing, to lose that is very bad but this is the reality. It’s bad for Ducati, two riders on the podium would have been very important for the championship and now we have lost a lot of points.”

It wasn’t the first incident Iannone had been involved with during the dramatic two-part Grand Prix. On the very first corner he came into contact with Marc Marquez, knocking one of his aerodynamic wings from the bike and dislodging Marquez’ onboard camera.

The Italian says he did nothing different to the previous lap, but the tricky conditions caught him out.

“Unfortunately in the last corner I go down and touch Dovi,” he said. “I’m disappointed about this and I am not happy. I break in the same point but in these conditions the limit is really close. It’s disappointing for the team as me and Dovi could have been on the podium, but it is now the past.”

The Ducati riders will now have to regroup as they prepare to fly to Austin for the third round of the championship which takes place this weekend.