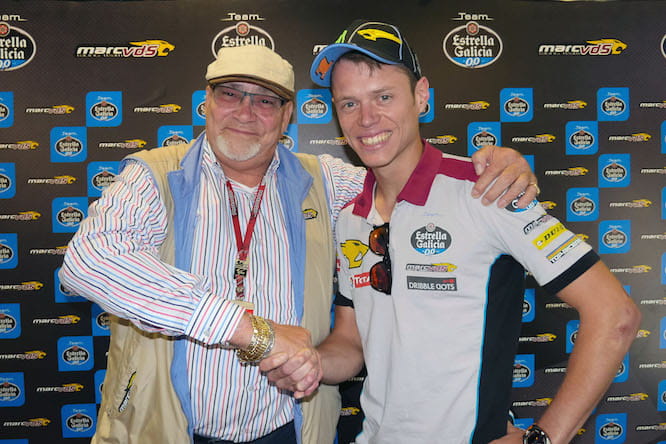 Tito Rabat will step up to MotoGP next season aboard the Estrella Galicia 0,0 Marc VDS team.

The move comes as little surprise with it widely being assumed that the Spaniard would take the spot left vacant by Scott Redding since the announcement the Briton would move to Pramac Ducati earlier this year.

These rumours were then exacerbated when Rabat tested Redding’s RC213V during Monday’s Michelin tyre test at Aragon, completing 60 laps aboard the machine.

Team boss Michael Bartholemy had made no secret that he’d be interested in moving Rabat to MotoGP after the Spaniard’s dominant Moto2 championship victory last season.

While it’s unlikely Rabat will retain his title this year, with Frenchman Johann Zarco needing just a handful of points to tie things up next week in Japan, he has still enjoyed a strong season aboard the Marv VDS Kalex.

“The objective of my life was to, first of all, arrive to MotoGP and then to make results in the premier class,” said Rabat on the deal. “This is the first step and for that I would like to thank Marc van der Straten, the team and Estrella Galicia for this chance and their confidence in me. I know stepping up to MotoGP on the factory Honda RC213V isn’t going to be easy, but I have all the winter to prepare, to make sure I’m strong and ready for preseason testing. It’s going to be a steep learning curve, but the goal will be to improve step by step so that we’re ready for the first race in Qatar.

“The test at Aragon aboard the factory Honda RC213V was an incredible experience. The first time you ride this bike you just aren’t prepared for it. There is so much speed, so hard acceleration and the corners arrive far too early! To be honest, it was the best experience you can have on a bike. Once I’d adapted to the speed, the power and the carbon brakes I was able to understand a little more how the bike works and go a little faster. I would like to have ridden for longer but, unfortunately, they wanted to close the track!”

It’s expected Rabat will be joined by Australia’s Jack Miller next season as the Marc VDS team expands to a two-rider effort.

Italian Franco Morbidelli is rumoured to be taking Rabat’s place in the Moto2 squad alongside Alex Marquez.