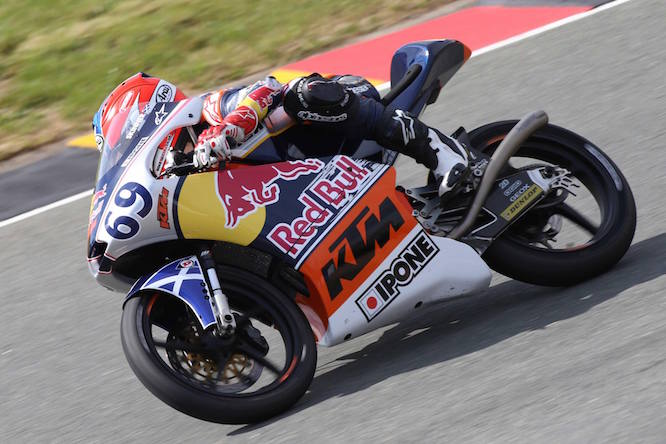 Thirteen-year-old Rory Skinner stormed to a debut podium in the Red Bull Rookies class with a stunning ride to third place at Aragon this afternoon.

The weekend started well for the young Scotsman, who stormed to pole position with the fastest-ever rookies’ lap of the Aragon circuit on Friday.

Making his intentions clear as the race got underway, Skinner became involved in an intense battle with 2015 Rookies' Champion Bo Bensneyder and Australia’s Olly Simpson for the lead on the first lap.

However, this battle was ended prematurely as the red flag came out to stop the race following an incident involving a number of riders on lap two.

Having been among that incident, Bensneyder was unable to restart and when Olly Simpson stalled ahead of the warm-up lap, Skinner saw his chance to shine as the restart got underway.

Never outside the top three, the Scot battled for the lead throughout race. A mistake from Spain's Raul Fernandez saw Skinner pull a one second lead in the final stages, but Fernandez and Marc Garcia pulled it in on the final lap.

Not giving up, Skinner tried to go round the outside on the final corner but just missed out crossing the line just a tenth behind the leader in third behind Garcia and Fernandez.

The former Aprilia Superteens champion will get another crack from pole position in tomorrow’s second race, which takes place on his 14th birthday.