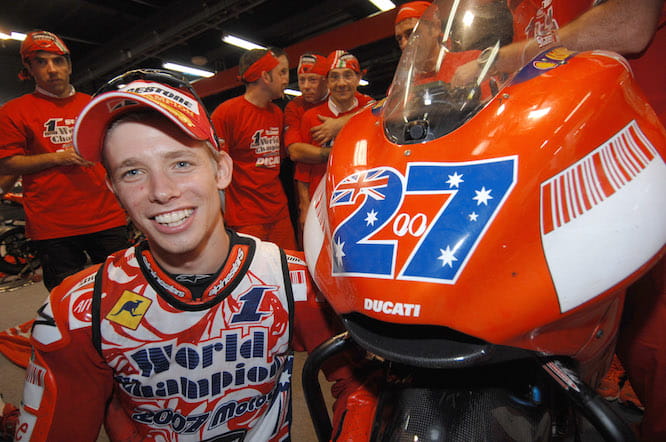 Casey Stoner will make a sensational return to Ducati next year in a testing role with the possibility of  wildcard appearances in the 2016 MotoGP season.

Rumours of the move began to surface on Wednesday morning at the Valencia MotoGP test, leading to Ducati's Sporting Director, Paolo Ciabatti addressing journalists in the media centre.

"Let’s say that Casey has been a hero for Ducati and won many GP races and a world title for us in 2007," he said with somewhat of a 'cheeky' smile on his face.

"He obviously moved to Honda and has been working for Honda but is still in the heart of Ducati fans and has a good relationship with many Ducati people, so let’s see what the future brings. We know that the contract with Honda is expiring at the end of this year and if there is a chance to do something together we would love to do it.”

The 30-year-old won his first world championship with the Bologna factory in 2007 and enjoyed 23 of his 38 career wins in the premier class on Ducati machinery.

Stoner left Ducati at the end of the 2010 season for a move to Repsol Honda which saw him take a second world title in 2011, before retiring from the sport just a year later at the age of 27.

The Aussie continued working with Honda Racing Corporation as a test rider during his retirement which led to a one-off comeback for the Suzuka 8 Hour in July.

The first signs of Stoner's interest in a MotoGP return surfaced earlier this year when the Aussie enquired about riding in place of the injured Dani Pedrosa at Austin, only to have the request declined by HRC who instead put Hiroshi Aoyama on the bike.

Now, Stoner looks set to switch his allegiance back to Ducati as he takes on the role of test rider with the option for wildcard appearances, much like there has been for current Ducati test rider Michele Pirro.

Stoner is under contract with Honda until the end of the year, with an official announcement expected from Ducati no earlier than January.