Marquez 'over the limits' in Italian Grand Prix 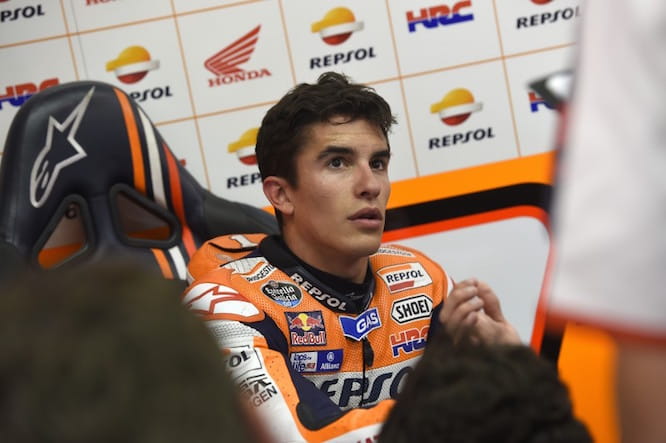 Marc Marquez has said he crashed out of today’s Italian Grand Prix as he was constantly riding on the limit, especially in the latter stages of the race where he was struggling with corner entry.

The Spaniard made a rocketship start from the fifth row of the grid to find himself fourth by the end of the first lap. Loose as you like, the reigning world champion barged through to second place knowing he’d need a decent result to keep his championship alive.

However, he struggled to maintain the pace of the frontrunners as the race went on and pushing hard to keep up, he lowsided out of contention at turn five on the 18th lap.

“The first laps were really good, especially lap one and this is what I planned”, said Marquez speaking after the race. “I needed to take the risk in the first few laps and try to be there and when I saw that after three laps I was behind Lorenzo I was really happy.

“We did the most difficult work in the first few laps but in the second part of the race I was struggling a lot, going over the limit on every corner and in the end I crashed. But I tried, we were there and I was riding on the limit in all the corners and this can catch up with you.

“The positive thing was I felt confident in the front. The problem was that when the tyre dropped on around lap seven or eight we faced the same problems like always, big slides on entry and no support on the rear. I was riding only with the front tyre and when you are riding like this for 20 laps in the end it is easy to lose it one time. 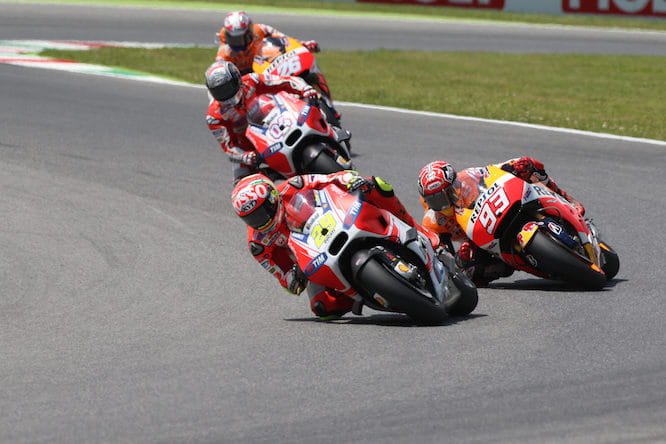 “When I go into the corner I am sliding too much so I push a lot on the front and then when I use the brakes I cannot stop the bike as the slide continues and makes it difficult. We are working really hard to improve that. It’s a problem we can’t fix from one race to another but we are working on it.

“One good thing was that in the first laps we had the speed with the new tyre. When I had the support on the rear I am riding really well and I feel really good with the bike. The problem is with the used tyre, for example in the first laps at Jerez I was able to follow Lorenzo but when the tyre dropped a little bit I was sliding in entry and it was more difficult.”

This is the third race in a row Marquez has struggled with these problems and he now finds himself 49 points behind championship leader Valentino Rossi. However, he says he’s confident of finding a solution soon.

“We fixed the exit of the corner a little bit this weekend, it’s not perfect but we fixed it a bit. On Saturday we did a test and I tried many things and this is why I missed the pass to Q2 because we were working really hard fixing corner exit. The biggest thing now is entry and we are already working on something.

“33 points was already a lot to be behind, 49 is even more. We want to fix this problem for trying to ride in a good way and then we will see but I will be the same Marc, so that means if in the next race I can win I will give 100%.”