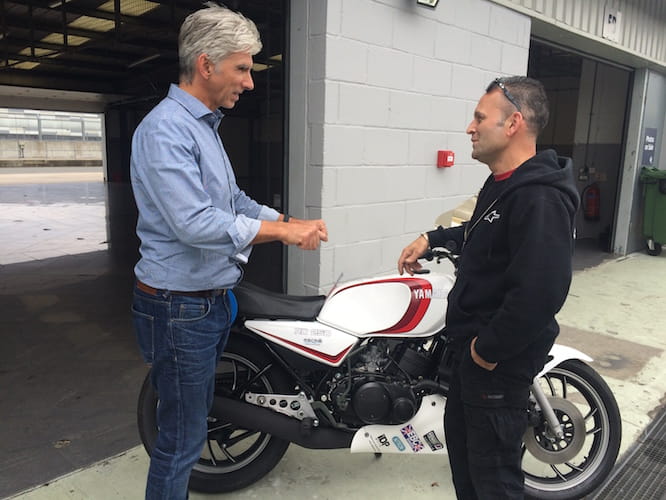 Former Formula One Champion Damon Hill could be set to make an appearance in this year’s revival of the classic Yamaha Pro-Am races at the British Grand Prix.

Hill, who won the Formula 1 Championship in 1996, started his racing career on two wheels competing in the first ever RD350LC Pro-Am series in 1981.

It is believed the 22 times F1 race winner is locked in talks with the parties behind the revival of the series, set to take place at this year’s British Motorcycle Grand Prix at Silverstone next month.

The iconic Pro-Am is being brought back by the organisers of the 2015 British MotoGP, who are trying to recruit as many of the series’ original riders as possible to take part.

Hill met with Daryll Young of IDP Moto, the firm that has taken on the mammoth task of restoring 30 RD250LCs by August, at Silverstone earlier today.

Young said: “Damon has taken a look at some of the RD250LCs being prepared for the race at Silverstone next month and is really keen to take part. Naturally his diary is fairly busy but if he can free up some time we could see him on the grid.”