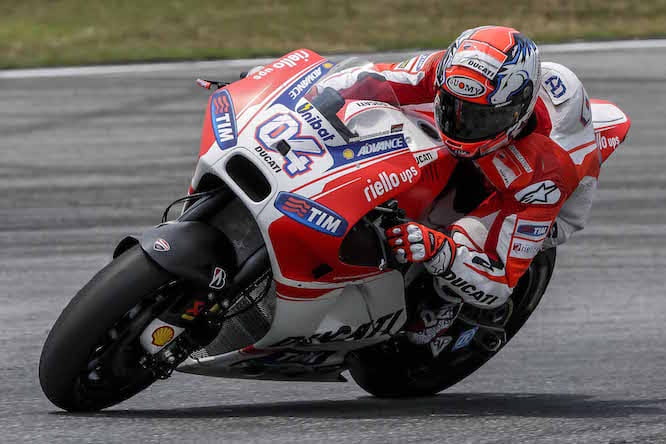 Andrea Dovizioso has said that Ducati have fixed the turning issues that have been plaguing the Desmosedici for at least the last five years.

The Bologna factory unveiled the radically revised GP15 two weeks ago with Dovizioso and Iannone getting a first taste of the new machine today in Sepang.

The new bike features a 25mm shorter wheelbase than the older models and the 1000cc V4 motor is now more compact, narrower and rolled back into a more conventional position like on Honda’s RC213V. Dovizioso says he noticed an improvement in handling from the outlap…

“I’m really happy because we fixed the problem about the turning,” said the Italian. “It was the key point in the last two years. Now with the new bike from the out lap I felt much better.

Having been with Ducati since 2013, the GP15 is the third generation Desmosedici Dovizioso has ridden.

“The first test with Ducati two years ago I felt from the out lap the limit of entry and turning. Today from the out lap I felt the bike became normal! I can call it normal. This is not something special but what with the GP13 and GP14 we didn’t have. 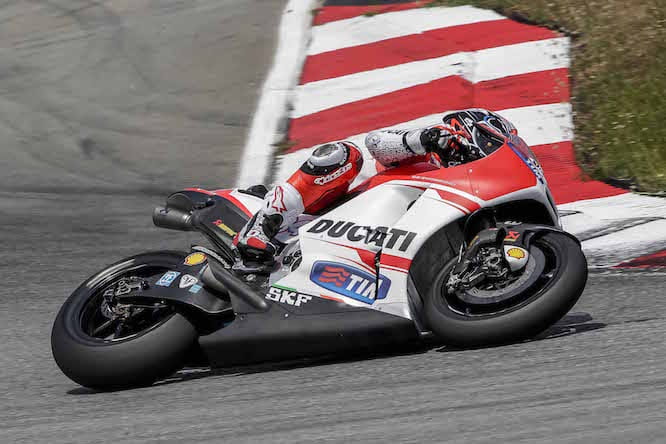 “I think it is the key point to start to work in a normal way. Already last year we improve the speed a lot and arrived close to the best but now we are in a normal situation, with a really good base.

“We can work on the set-up, my line on the track in the normal way. I can play with the bike, so I can try to pick up the bike more, try to be less aggressive on entry and this is 100 percent the way to ride to ride in MotoGP.”

Dovizioso set today’s tenth fastest lap but says this was on the older Desmosedici GP14.3. He says the feeling on the new bike isn’t so great at the moment as they’ve not had time to fine-tune the set-up.

“Today we weren’t so fast because the bike was completely new and so we didn’t do so many laps, and then it rained in the afternoon. The key point was the turning and the improvement will be very big about that. But we have to understand if we lose something compared to the old bike. In braking we weren’t strong but it was just set-up.

“Today I started on the 14.3 and I made the lap time very easy because I know that bike very well. But I made a 2m 1.6 with the new bike and the feeling is not so good. So we have to work with the GP15 from now. We have only one GP15 each at the moment.

“Now we have to work on the set-up because the bike is completely different and our balance is not ok. For the GP14 the set-up was perfect. This bike we have to understand now. It is just the first day. Now we start a normal job.

I hope and believe we have a big margin with this bike. It is a really new bike. It is not quite starting from zero, but before we could change some parts. Now everything is different.”