Brit MotoGP star Cal Crutchlow thinks Dani Pedrosa is the man to watch for the 2016 MotoGP title because his riding style suits the new Michelin tyres.

The British star says Pedrosa’s weight and style mean he’s not pushing the front as much as other riders making him less likely to fall victim to the front-end washouts we’ve seen in testing.

While riders have praised the extra grip provided by Michelin’s rear tyres, the front tyre options have come under fire with almost every rider experiencing a front-end crash at some point during testing.

At 51kg, Pedrosa is the lightest rider on the MotoGP grid meaning there’s less weight moving towards the front under braking on his Repsol Honda RCV, something Crutchlow believes will prove vital next season when coupled with Pedrosa’s rear-focused style and previous experience on Michelin rubber. 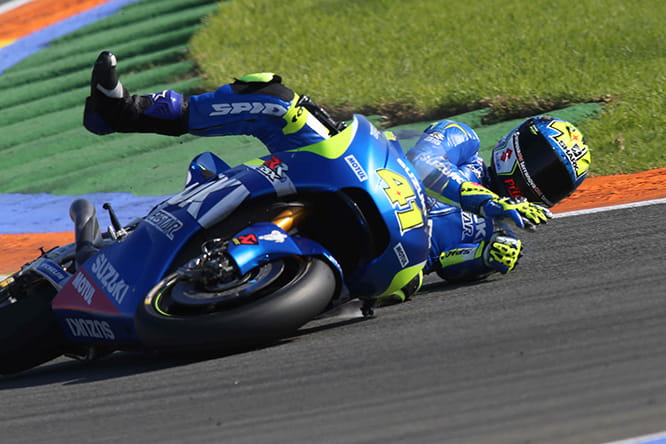 “As of the Valencia test, I think Dani has the biggest shot at the title next year because he’s not going to load the front tyre in the same way as everyone else,” Crutchlow told journalists. “He’s got so much experience on Michelins and what he did at Valencia seemed to come really easy. He’s the guy to look out for next year.”

Crutchlow voiced concern over the issues with Michelin’s front tyre after there were almost 30 crashes during November’s post-season test in Valencia.

A number of teams have since tested at Jerez and while there were fewer front-end crashes, Michelin have organised an extra test for each factory’s test riders to work on a solution for the front-end grip issues.