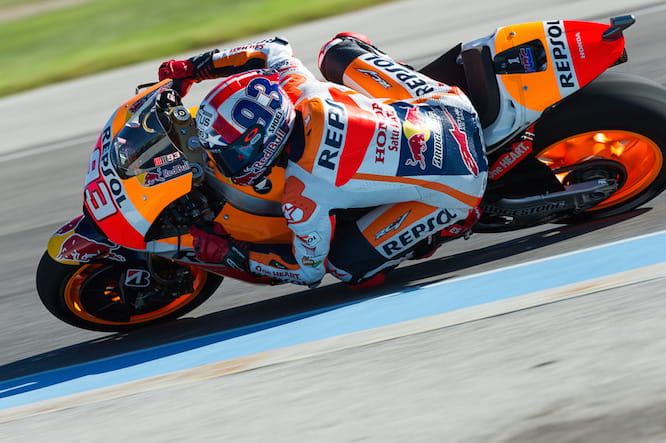 Marc Marquez took another nine points out of Valentino Rossi’s championship lead in Indianapolis, storming to his ninth consecutive victory in the United States.

Rossi’s lead took a hit from Lorenzo too, who finished second after leading most of the race, but it could have been worse had the Italian not come off best in a late race duel with Dani Pedrosa for third.

Lorenzo bolted off the line to take the lead early on but young pretender Marquez was never far behind. Stalking the Mallorcan throughout the race, Marquez finally made his moved with three laps to go and instantly pulled a gap.

Having qualified eighth, Rossi once again was forced to fight through the pack on the opening laps. Despite being able to run at a pace identical to Lorenzo and Marquez, it was going to take something special for him to close down the gap. 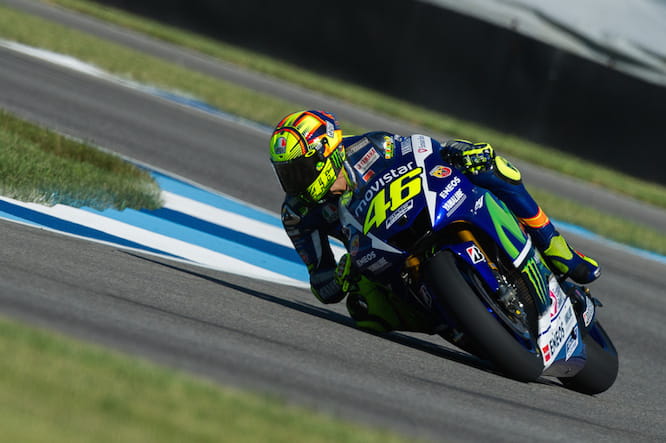 Pedrosa however was a reasonable target for Rossi and the Movistar Yamaha rider moved into third place with five laps to go. Pedrosa kept on the Italian’s tail and gave as good as he got in the closing stages but it wasn’t enough to beat the nine-times world champion.

Andrea Iannone took fourth ahead of Bradley Smith, who desperately tried to chase down the factory Ducati rider in the closing stages. While he didn’t succeed, he did once again beat team mate Pol Espargaro who finished second ahead of LCR Honda’s Cal Crutchlow.

Andrea Dovizioso and Danilo Petrucci rounded out the top ten. 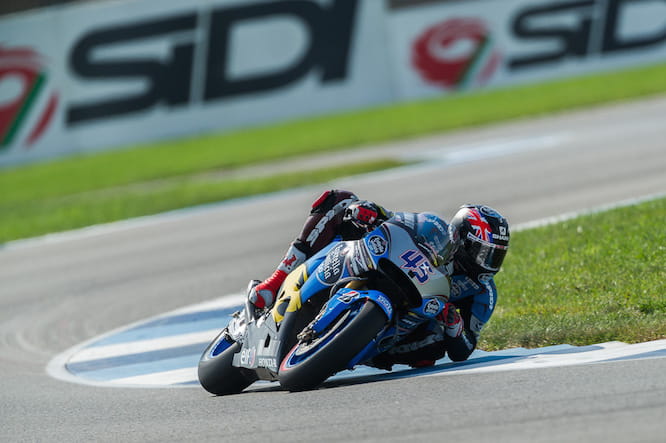 Marquez said he was surprised by Lorenzo’s pace in the race: “In practice, I was able to do high 32s and his pace was low 33s but in the race he improved. I knew from the beginning that we would have to push hard in the last few laps so I wanted until the end and then pushed a little more on the last two laps.

Rossi’s championship advantage now sits at nine points over Jorge Lorenzo, with Marquez now just 56 points in arrears. “It was a very difficult race,” he said. “But I am very happy as I lose just four points from Jorge and this is OK as he and Marc have been much faster all weekend.

“I start from behind but I was fast to catch fourth but after that with Pedrosa it was very difficult. I hope to pull away but he was very hard to pass!”

The MotoGP season resumes in just a week’s time at Brno.

A wet track at the start of the race made things interesting in Moto3, but as the circuit rapidly dried out many riders pitted for slick rubber allowing those on slicks to gain an advantage. This saw three riders take their debut Grand Prix podiums, with Livio Loi winning from John McPhee and Philip Oettl.

Alex Rins took his debut victory in the Moto2 class ahead of Johann Zarco and Franco Morbidelli.