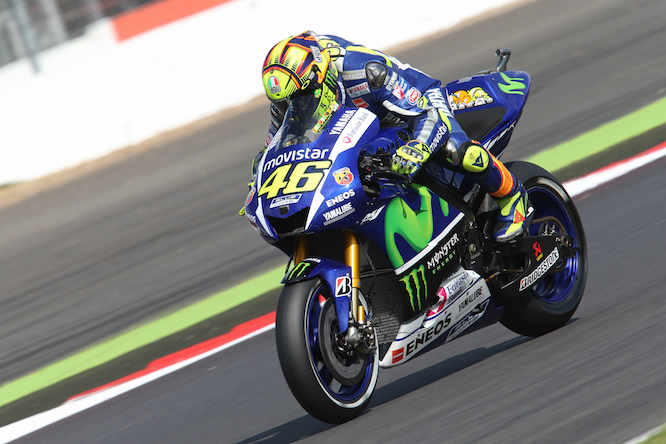 Valentino Rossi has said it will be hard to fight for a podium in tomorrow’s British Grand Prix despite qualifying a strong fourth place.

Rossi believes Lorenzo and Marquez are in a class of their own at the moment and views Dani Pedrosa as a significant threat to end his podium run, which hasn’t been broken so far this season.

With the possibility of two Honda’s between him and Lorenzo, Rossi admitted he is concerned about losing important championship points tomorrow.

“I am quite satisfied about today because we were able to improve a lot with the feeling and setting with the bike,” said Rossi after the session. “We’ve done quite a good job. The better feeling made me quite fast in general and there was quite a good rhythm after some laps because at this track the rear tyre is under stress so you need to find the right balance and the right set up for the bike so it is reactive but at the same time try to save the rear tyre to keep the pace.

“Last year I did a very good first part of the race but after six or seven laps I slowed down too much and lost Jorge and Marc who were stronger and continued with the pace. We have tried a lot of things and this afternoon was not so bad. I think the pace of Jorge and Marc is a bit better so we need to improve more if we want to fight with them. At the same time it will be harder to fight for the podium because Pedrosa is very fast and has a very good pace. We need to continue and make it better tomorrow. But with qualifying I am quite satisfied and quite happy because the target was second row and I am fourth.

“At this moment they are stronger than me. On paper I think the situation is Jorge and Marc fight for the victory and Dani and I fight for the podium but the difference is very small. The track is so long if you are able to find a small modification that gives you just a little bit in every corner it will close but we will see."