Marc Marquez rules himself out of MotoGP title chase 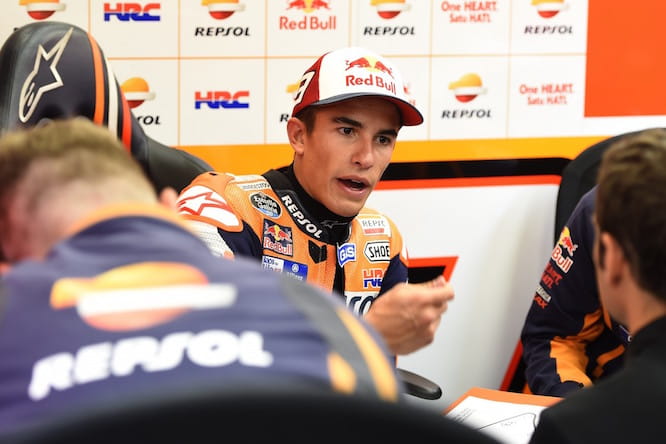 Marc Marquez has ruled himself out of the fight for the 2015 MotoGP title after crashing out of today’s British Grand Prix at Silverstone.

The Spaniard showed incredible pace across the weekend and annihilated the lap record to take pole on Saturday, but a change of weather conditions on race day saw things turn on their head for the two times World Champion.

A strong start saw Marquez latch on to the tail of race leader Valentino Rossi, where he remained for the first half of the race but a small mistake into 13th lap resulted in him highsiding the Repsol Honda at turn one.

“Today was a difficult race in wet conditions because everything in the dry felt fine and I was ready,” said Marquez. “But in wet conditions there is always that question mark. I concentrated in the warm-up, I did a great warm-up and felt very good with the bike but the feeling was not very good.

“In the race I felt good and I was trying to follow Valentino and I was able to do it. In some parts I was faster but in other points I had a floating feeling in the rear, the same as we had at the beginning of the season in dry conditions. That feeling made it difficult to manage during the race. I tried to manage but in the end when I was behind Valentino I arrived at the end of the straight, I braked and lost the rear, the rear was locked. Just as I tried to save the crash I was already flying. 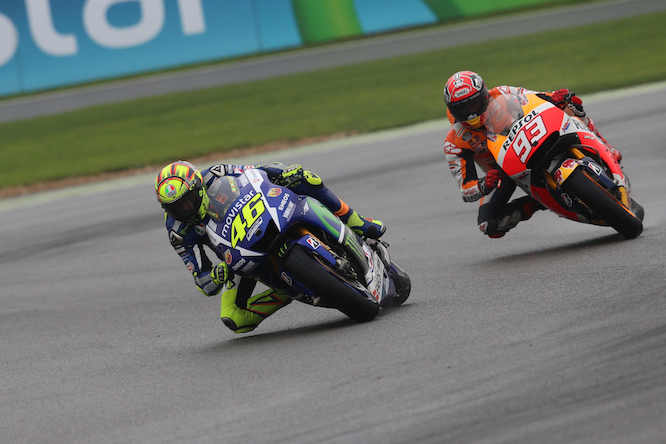 “The biggest problem with the floating feeling is not having the control to save the crash. If you don’t have grip in the exit of the corner maybe you will be slower but you will be safe because the traction control is going in. But when you have the floating problems you cannot do anything just try to manage it. The problem is on wet conditions a small mistake means a crash.”

The no score means Marquez now sits 77 points behind Rossi in the title chase and with 150 points to go, it would be almost impossible for him to take his title this year.

“We lost the option for the championship but we will try to win many, many races, as much as possible from here to the end of the season.

“I have no more thoughts on championship. Not win or zero but that is more or less my style. I will try to win but when it is not possible I will try to finish in second place and on the podium. I will not change my level because I am already taking a lot of risks.

“The championship battle between the Yamahas looks interesting because on speed Lorenzo is faster but Valentino has unbelievable experience and is consistent he can take profit from all the situations. It will be interesting to see this battle and we will try to be there in middle for every race.”