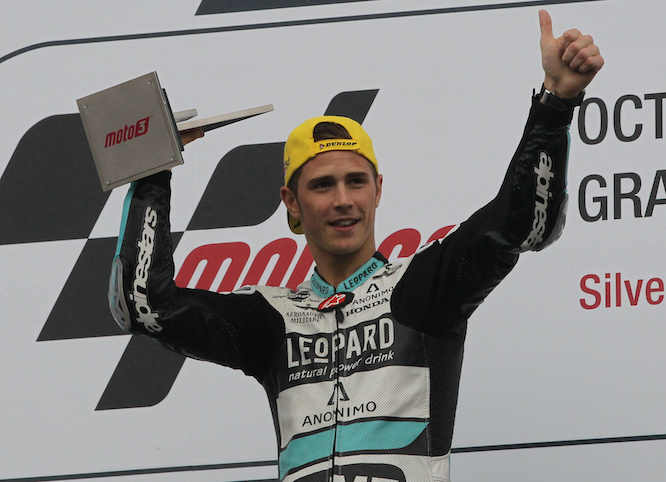 God Save the Queen bellowed out of the PA system at Silverstone this afternoon as Danny Kent stormed to victory in his home Grand Prix.

With conditions dire for the 17 lap Moto3 race, Kent made a steady start as Isaac Vinales rocketed off the line. The Spaniard’s early risks didn’t pay off as he crashed out on the second lap, leaving Kent in the lead.

Sensing his opportunity, the British star got his head down and began to build a gap on his competitors, stretching his lead to over ten seconds at one point before backing off to ensure he crossed the line after a moment with three laps to go.

“You're never safe in conditions like that,” said Kent after the race. “I thought I was safe with three laps to go, then the rear wheel came round on me and I thought that was the race over. Races like that are always difficult, especially the last four laps, the rain got harder and harder, and instead of it being just wet, there were puddles starting to form on the track and making it a lot more difficult. This is why us riders train so hard, you need to concentrate 110%, it's so easy to go out there and make a slight mistake, and easily crash. It was the longest race of my career, but it was probably one of my best, it is my best victory of my career, and if there is one race on the calendar that you want to win, it's your home Grand Prix, and we were able to do that.”

“In the two races before this, we just had bad luck, which comes with racing. You can lose twenty points just as fast as you can gain twenty points. We just need to keep working hard and we've got to be clever. Now we have got back up to 70 points, six more races, and we are getting closer and closer. But it's not over until it's over.”

Kent now holds a 70 point championship lead, but he’s not letting that get to his head with six races of the season remaining.

“The goal for me is to go out and win the last six races. Of course, we are not going to do anything stupid, but the race always depends on where Bastianini is. If I'm going into that last corner and Bastianini's winning, then of course I'm going to try and pass him and win the race. But if I'm down in second and he's down in eighth or ninth, then we'll settle for that and extend our championship lead. We're at that point in the year where of course we want to win races, but we want to win the championship and that's more important.”