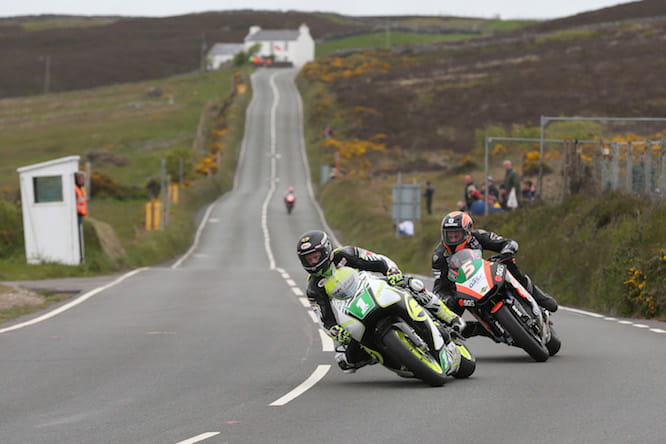 The first practice sessions of this year’s Isle of Man TT got underway last night, although weather conditions hampered the sessions meaning the F2 sidecars didn’t get out on track.

The Bennetts Lightweight TT riders got three quarters of their session before the rain came in, with Ryan Farquhar storming to an impressive opening night lap of 117.12mph.

The first laps went to the newcomers, who were taken for their speed-controlled demo laps with rider liaison officers Richard ‘Milky’ Quale and John Barton.

Jamie Hamilton was the first rider to complete a lap at 112.19mph followed swiftly by Sweeney at 111.18 and then Ivan Lintin, who briefly went quickest at 114.64mph.

At 6.57pm it was the turn of the first official session with the Lightweights setting off down Glencrutchery Road and the honour of being first away was Jamie Hamilton and Michael Sweeney. They were followed in quick succession by Junior Manx Grand Prix winner Andy Lawson and Dan Cooper, Michael Rutter and James Hillier and Ivan Lintin and Michael Jessopp.

Having left the line together, Farquhar and Gary Johnson then topped the timesheets with their first laps of 114.827 and 114.866mph respectively. Still circulating together, the duo increased the speeds on their second lap with Farquhar topping the table with the impressive 117.122 ahead of Johnson with 117.02mph.

Lee Johnston was up to 115.40 with Dan Cooper slotting into fifth overall at 113.41mph. Meanwhile, newcomer McGee was going well on his Lightweight Kawasaki at 107.60 with McHale, continuing on his Superstock machine, also impressing at 108.12.

However, rain was beginning to fall at various parts around the course and Clerk of the Course Gary Thompson ended the session early.

Practice will resume on Monday evening, although with questionable forecasts once again – we’ll have to wait and see.