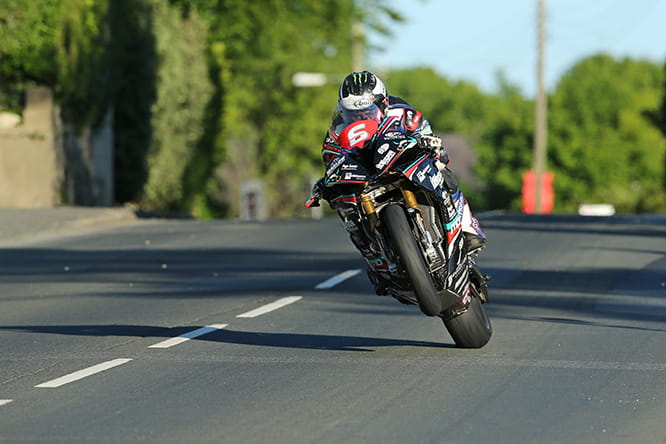 Michael Dunlop set the Isle of Man alight on Wednesday evening when he set the first 131mph+ lap of the week, the Hawk Racing BMW rider posting a speed of 131.574mph despite encountering strong winds over the Mountain.

Other than that, the island was again blessed with dry, sunny conditions and such was the pace, Ian Hutchinson lapped quicker on his Superstock bike compared to his Superbike, 130.745mph to 130.690mph. In a rapid evening, John McGuinness also began to show his hand with a lap of 130.497mph.

“The Superbike’s been wonderful so far and it’s ready to race so we’ve used tonight to try a few experimental settings with the bike,” Hutchinson said with McGuinness saying how he’d now settled down after a bit of a scrappy evening on Tuesday.

“I’ve been trying too hard so far this week so I had a nice run on the first lap tonight and pushed harder second time around,” the 23-times winner said. “The wind was really bad in places. You expect it over the Mountain but it was catching you out in places like Kirk Michael too.”

There was an 11-minute delay to the session, the first of the week, and although it was Peter Hickman and Steve Mercer who led the field away, it was Michael Rutter who was first back at the Grandstand with a lap of 129.163mph. Dean Harrison went slightly quicker at 129.673mph before Hutchinson upstaged him with a near 130mph lap, 129.811mph.

Dunlop was only slightly behind him though at 129.582mph but McGuinness posted his first 130mph+ lap of the week second time around at 130.497mph before Hutchinson got the better of him with 130.691mph.

As the session wore on, the riders swapped between their Superbike and Superstock machines with Hutchinson going great guns on the latter, to post a speed of 130.745mph, the first 130mph lap of the week in the class where Rutter was second quickest.

However, after a lap on his Superstock BMW, Dunlop went back to his Superbike machine to set the first 131mph+ lap of the week in the closing minutes of the session.

Practice resumes tomorrow evening from 18:20 and includes the Lightweight class