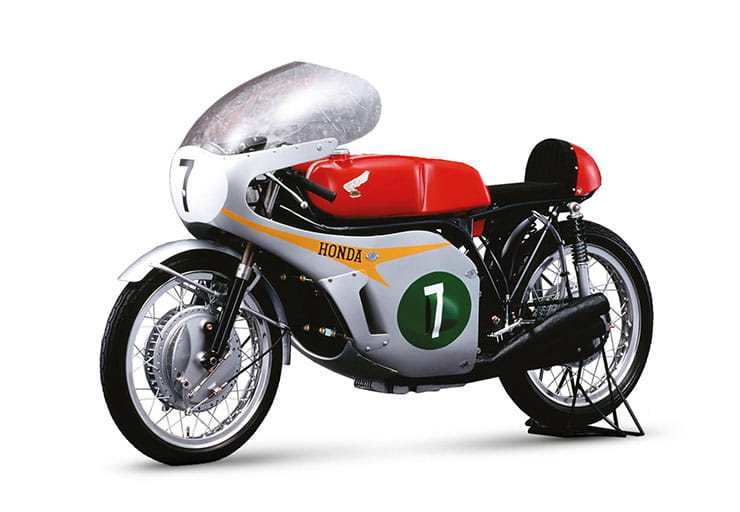 The only surviving, and first ever-built, RC165 - the straight-six 250cc Honda - known as the Honda ‘Six’ will be appearing at the Isle of Man Classic TT in August.

In the hands of ex-Honda factory rider, Steve Plater, the delectable sounds of the ‘Six’ will be heard as the ITV4 TT presenter complete a demonstration lap around the 37.73-mile Mountain Course on Monday 28th August in full replica leathers and helmet, naturally.

Owned by Team Obsolete’s Rob Iannucci, the ‘Six’ is the very same machine Jim Redman and Stuart Graham raced before Mike Hailwood took it to victory in the 1966 Czechoslovakian Grand Prix.

Redman raced what was the first Honda ‘Six’ at Monza in 1964 where it was rushed from Japan in the passenger compartment of a commercial airplane. The Rhodesian took third at Monza and then took the bike to its maiden victory when he won the 1964 250cc Japanese Grand Prix.

The ‘Six’ was one of the most interesting and most technically advanced racing motorcycles of its time and was built to put a stop to the run of victories for the 250cc Yamaha which, in the hands of Phil Read, won the 1964 and 1965 250cc World Championships.

Although the six-cylinder Honda 250 did not win the championship in 1965, it was able to put up a competitive fight against the two-cylinder Yamaha, ridden by Read and Mike Duff. Redman won the 250cc TT that year for the fourth time in a row. Yamaha’s response was to produce an updated two-stroke, four-cylinder motorcycle, built solely to stand up to the competition from the Honda.

The “Six” will first appear at the VMCC’s Festival of Jurby on Sunday 27th August for some shakedown laps. Dave Roper, winner of the 1984 Senior Classic TT, will ride the Honda at Jurby on the 27th.

Team Obsolete owner Robert Iannucci has supported the Classic TT with a series of iconic bikes with Mountain Circuit connections since the event was established in 2013 and both Redman and Graham will attend the Classic TT to talk about their experiences with the bikes.

Iannucci said of the restoration of his bike, "Recently we disassembled and scrutinised the entire motorcycle again. We are carefully rebuilding the motor with new pistons and a new crankshaft assembly. We commissioned two from an Italian Formula One technology company, supplying them with the complete original crankshaft assembly which they reverse engineered. Their engineers said that they got an education from the process.

"Team Obsolete has been racing classic bikes since 1978 and have now competed in 1500 races with 50 riders. Our victory in the 1984 Historic TT, and the 1989 Manx GP Milne Shield, sealed our love for the Mountain Circuit, which represents the ultimate challenge. We have made 26 starts in all, with two wins and two fastest laps.”

Steve Plater added, “It is an honour to have been asked to ride of the most iconic and technically ground breaking motorcycles ever built on the most famous race circuit in the world. Whenever a bike like this gets demonstrated at other events, it is normally over a very short run, so you have to admire the ambition of Robert Iannucci and Team Obsolete in making this happen for a full lap of the TT Mountain Circuit. I’m sure the fans coming to this year’s event are in for an assault on their senses when this bike comes past!”