Entries for the Isle of Man TT have now closed and the start numbers have been confirmed so we’ve put together a list of who is riding for which team and in which starting position for the two 1,000cc classes – the Superbike and Senior Races - when the flag drops in June. 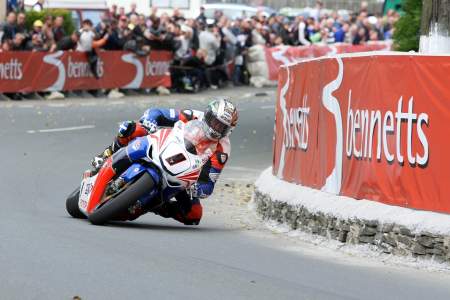 20-time winner John McGuinness lines up with the number 1 plate on his Honda having reverted to running as no.3 last year in tribute to Joey Dunlop’s first Honda TT win. The 5th fastest rider around the Mountain Course ever is James Hillier and he’ll be following McGuinness on the road on board his Kawasaki.

Five different manufacturers are represented in the top six places with the returning Ian Hutchinson setting off third on his Yamaha whilst the Suzuki, Honda and BMW of Guy Martin, Bruce Anstey and Michael Dunlop respectively, follow in the standard 10-second intervals.

2014 looks to be the closest yet in terms of potential winners – eleven solo riders have taken 57 wins between them and sixty-six riders have already lapped at an average speed of over 120mph!

Here are the start numbers for the top 20 and selected others:

The Formula Two Sidecar class continues with an impressive entry of over 60, nine of whom will be newcomers. 16-time winner Dave Molyneux, again with Patrick Farrance in the chair, will be looking to add to their tally.  Whilst last year's first time race winners, former World Champions Tim Reeves/Dan Sayle and Ben Birchall/Tom Birchall, as well as John Holden/Andy Winkle will provide the main threats.

Paul Phillips, TT and Motorsport Development Manager, Isle of Man Government, believes that the entry list will see records tumbling again.  He said, "Not only do we have an increasingly impressive entry list at the front of the grid, with all the leading contenders competing and significant commitment from the leading manufacturers but we also have a incredible strength in depth throughout the field.”