Michael Dunlop without ride for 2015 TT 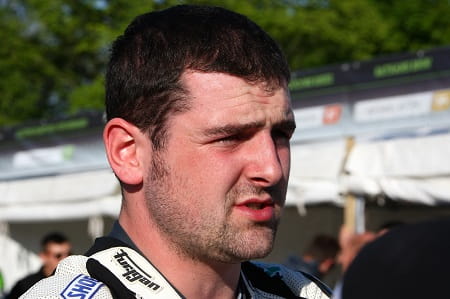 TT hero Michael Dunlop has lost his ride with BMW Motorrad as the German manufacturer reportedly switches its support to the Ulster-based TAS outfit for the 2015 season.

According to reports, the Ulsterman confirmed he won’t be riding for the German marque next season at the Ballymoney Sports Awards last night.

Dunlop stormed to four TT victories this year, three of which aboard BMW machinery becoming the first rider since Georg Meier in 1939 to win the Senior TT on a factory BMW motorcycle.

The power and precision of the German marque’s flagship S 1000 RR superbike and the sheer determination and raw speed of the Ballymoney man proved unbeatable in the 1000cc classes around the 37.73 mile mountain course.

Rumours the Tyco-backed TAS Racing outfit would switch from Suzuki to BMW have been doing the rounds since the Ulster Grand Prix, where fans’ favourite Guy Martin took a victory and a brace of podiums for the Northern Irish outfit.

The team is yet to confirm their rider line-up for next season but it’s expected they will retain the ever-popular Guy Martin and elder of the Dunlop brothers, William. The move means the team are also likely to switch to BMW machinery for the British Superbike Championship.

The move also means Dunlop is unlikely to compete at next month's Macau Grand Prix.

The Ballymoney man was without a ride for the 2014 TT until he clinched a late deal with BMW last February.