Isle of Man TT 2019: At home with McGuinness: “It wouldn’t feel right if I wasn’t doing the TT this year.” 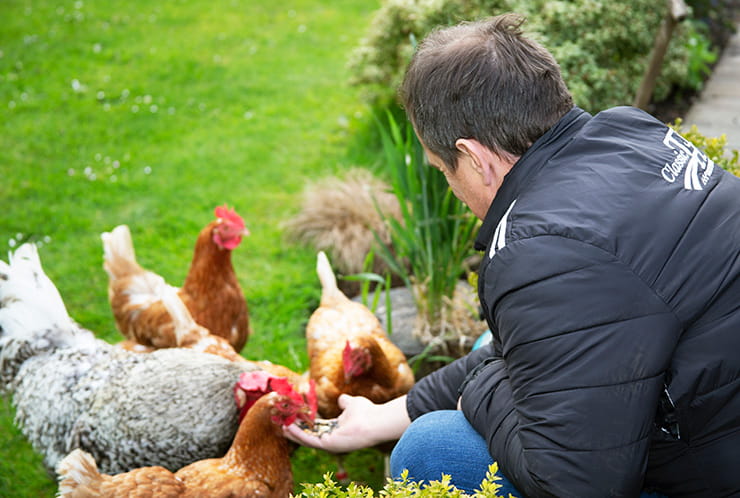 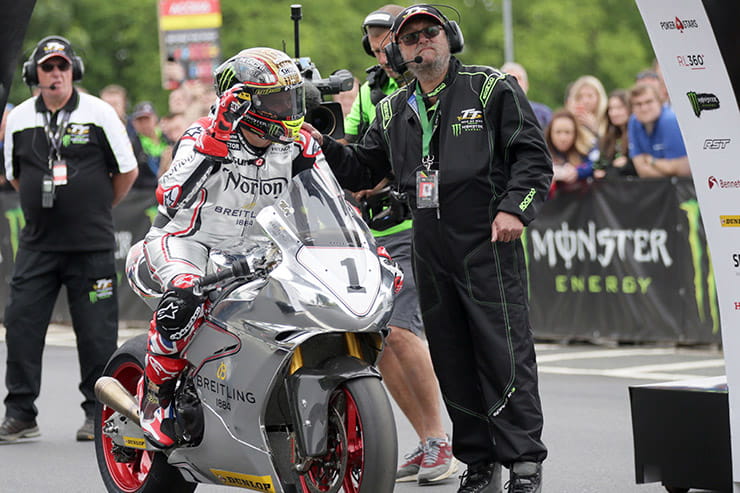 Above: the juxtaposition between home and racing

THE bar has raised for TT 2019. Thanks to the likes of Peter Hickman and Dean Harrison, speeds are now reaching the 135s. But lap records aside, no rider can match the legendary stature of 23-times TT winner John McGuinness. Not only is John the greatest living TT racer, he’s part of the very fabric of the TT itself. And this week, ahead of the TT, he invites BikeSocial into his home to talk about the TT, his Norton superbike and… chickens.

THEY say a man’s bookcase will tell you everything you need to know about him. So, to glance at John McGuinness’ bookshelves is confirmation that the 23-times TT winner lives, breathes and sleeps racing.

His books span every facet of motorsport topic: from Murray Walker to Joey Dunlop, from the general to the obscure. And then, nestled between books are other treasures from his historically significant racing career. There are photographs of John and his wife, Becky, in his early days of racing in the 1990s, a specially-crafted model of John on the Honda Legends machine and a slate from the TT scoreboard of one of his winning lap speeds. And then, amidst all this, is a tiny photograph of a very young John and middle-aged Joey Dunlop. 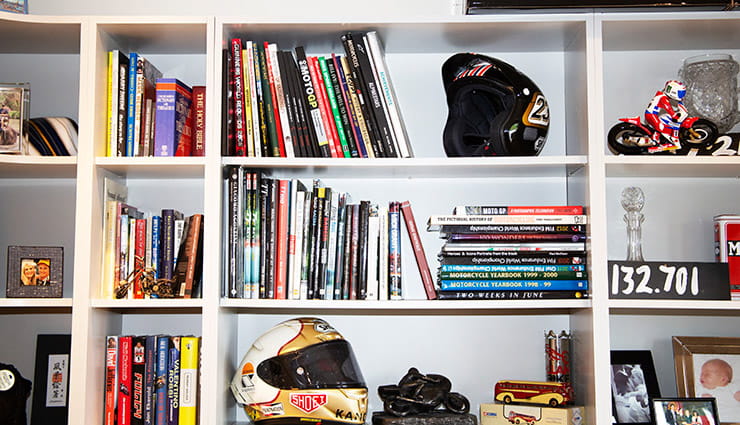 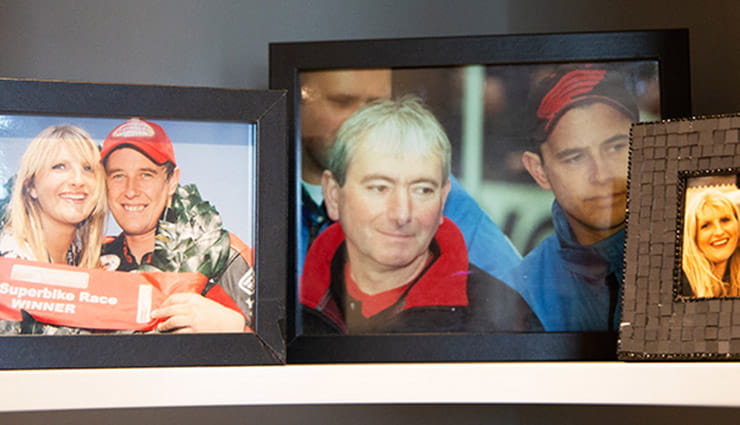 Above: Ever wondered what the great John McGuinness reads? Well, now you know.

And it’s the latter picture that stands out. John looks naive and young; Joey looks world-weary and knowing. Little did these men know that between them they would accrue 49 TT victories between them, and counting. And little did the fresh-faced John realise that he too would - just like Joey - become synonymous with the TT itself.

John has been part of the TT since his inaugural race in 1996 on his Paul Bird 250cc Honda. He finished 12th and my father, Noel Clegg, was behind him on the start line that day. “I can still remember it now,” he says. “Your dad was right behind me on his 125cc Honda.” Today, the Paul Bird RS 250cc machine stands in his hall at home. “It’s lovely, isn’t it? Look at the frame and the swinging arm, it really is an amazing bike,” he says.

Fortunately, the McGuinness’ home has been designed around these mini monuments to racing. Around the corner in the entrance section of the hall sits his HM Plant Fireblade. It stands in front of a photograph of the Honda team, taken to celebrate their debut TT in 1959. 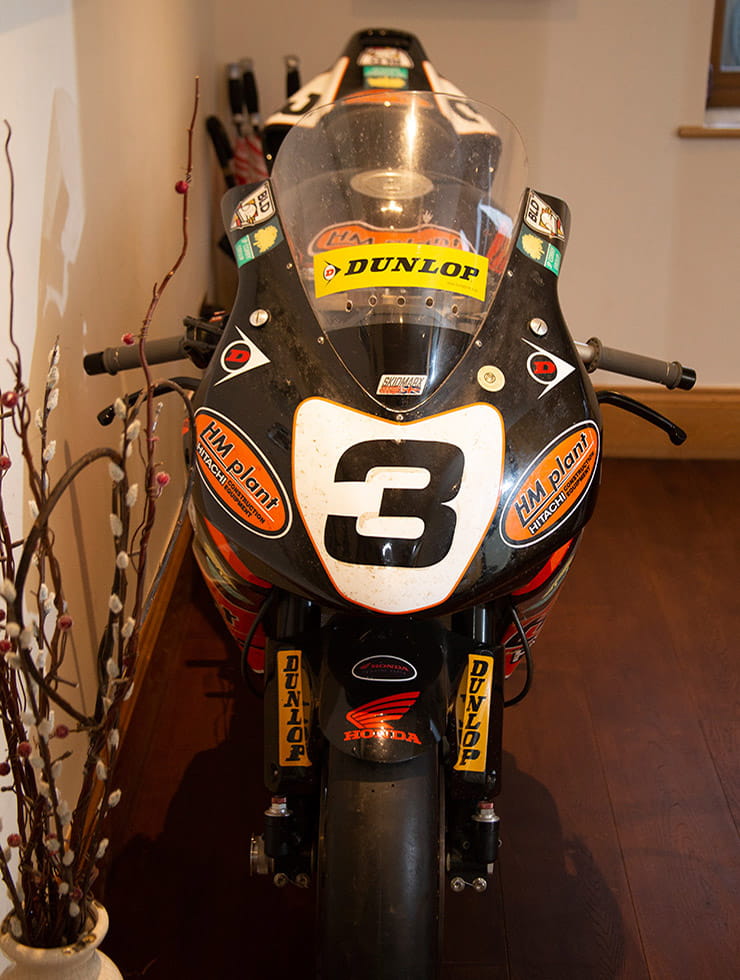 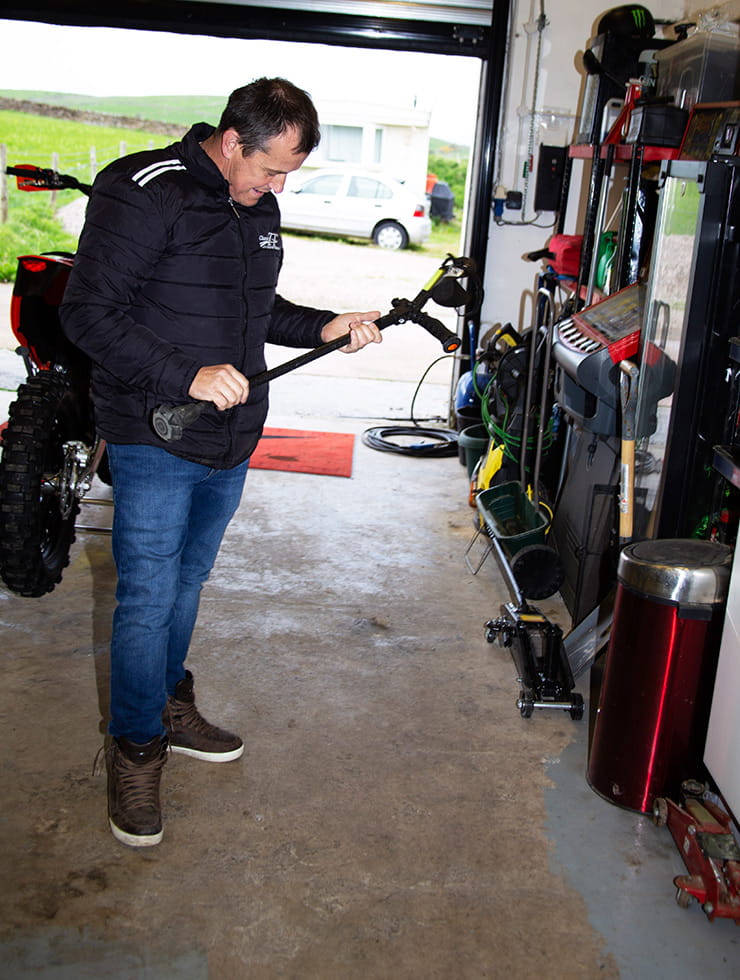 Above: HM Plant Fireblade sits in the hall way where as his crutch from his 2017 broken leg remains in the garage

The house sits within 23 acres of countryside - and all the creatures that come with such a lifestyle: chickens, cows, woodpeckers, cockerels and tawny owls. It’s a world apart from racing. “It’s brilliant here, you can really switch off and I’ve got really into living in the countryside.”

So much does he love the countryside that, during his tour of outbuildings, he picks up what looks like faeces. “It’s not pooh,” he says. “It’s the pellets owls spit out - a bit like a cat when it coughs up hairballs.” He breaks up the brown dried lump. “You see, look at that - a tiny set of teeth, it must be from a shrew.”

After a tour of the grounds, owl pellets and John’s tractors (a vintage one and a new (ish) John Deere) we talk about the TT. John has just returned from a rained-off test session on the new Norton. But despite frustrating weather conditions, he’s been getting plenty of saddle time He said: “I’ve riding and riding and ducking and diving from the weather.” 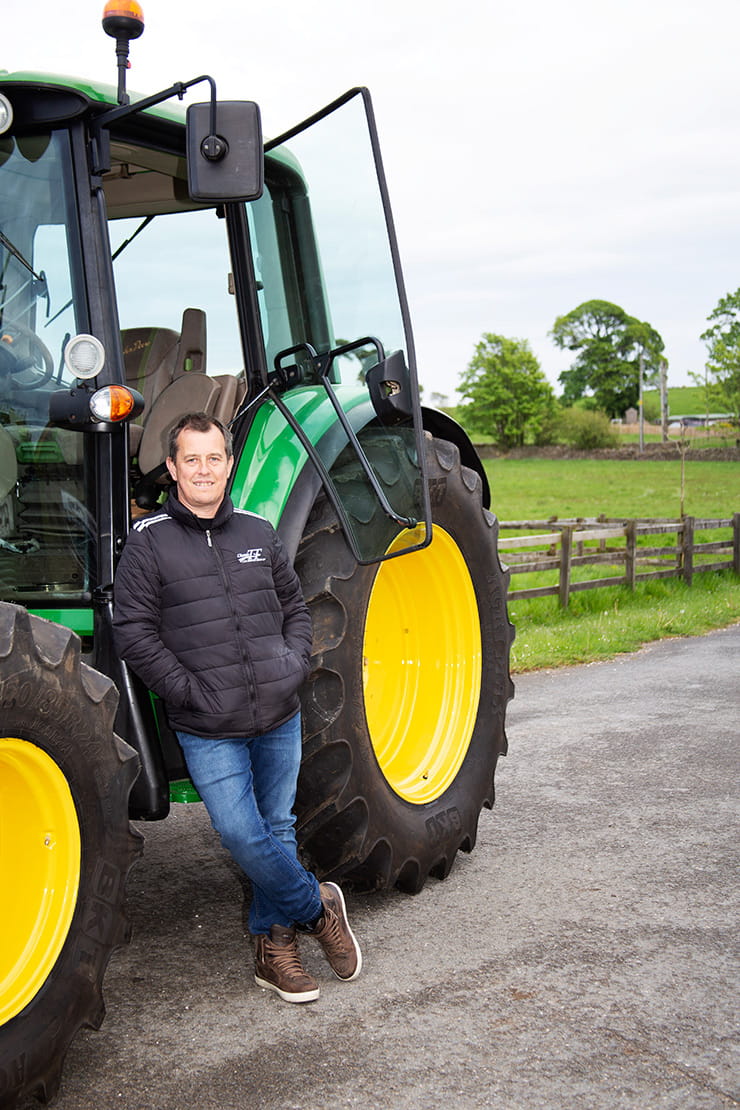 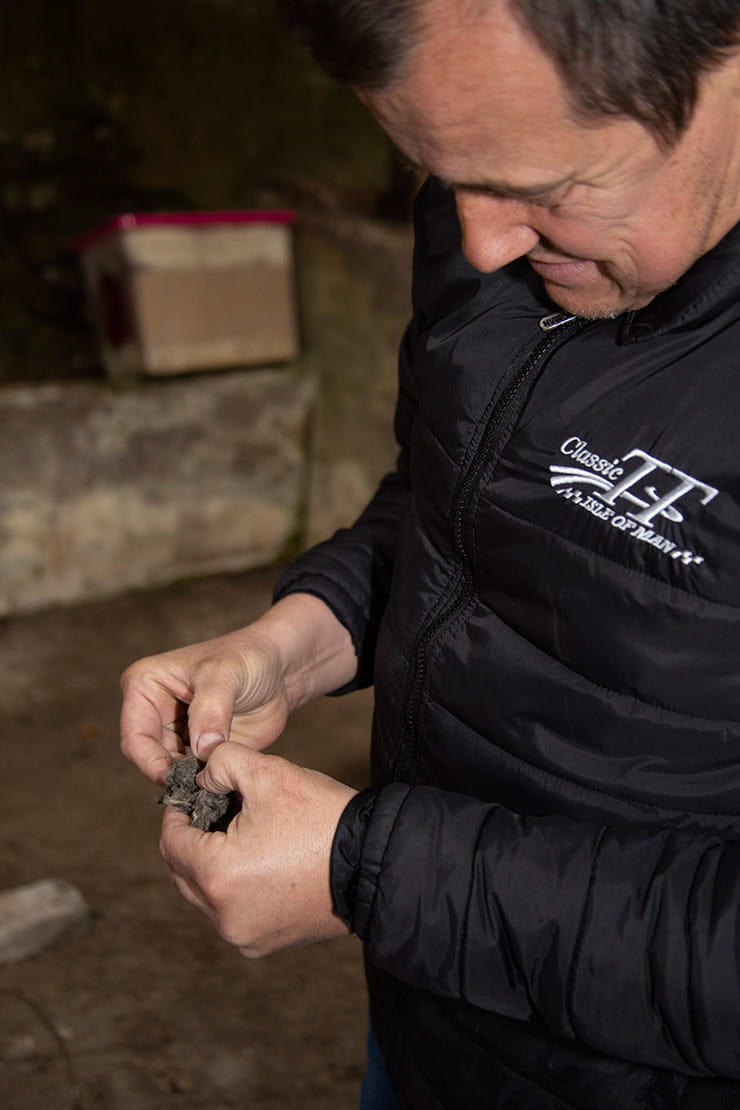 Above: The two John’s; McGuinness and Deere, plus examining owl pellets

For TT 2019 John will be racing the V4 Norton Superbike and the hotly-anticipate Norton Superlight, alongside Peter Hickman and Davey Todd. Speaking of the superbike, he said: “The bike’s a racing style machine with tubular frame. It’s a mixture of a lot of things, really, and it’s obviously got a V4 engine in it so it’s very narrow. V4s have always traditionally made for great machines - the RC 30 and RC 45, Ducatis and Hondas are all V4s.”

The Norton’s stable too, according to McGuinness: “It’s based on a road bike so it’s got lightness and stability so it’s a good solid bike. It’s very compact and light too and feels quite so you sit in it nice and neat and with it being narrow you get your legs tucked in. Everything’s quirky on that bike, I do like it.”

John’s signed to Norton in 2017 after a long stint with Honda. Speaking of the difference in team cultures, he said: “It’s hard because I had so much experience with Honda but now I’m chucked onto something else I’m still learning. I was with Honda for 1998 to 2002 and then from 2006 until 2017. It’s been difficult. It’s sad really, I had a good relationship with certain people in Honda and I was on the same sheet with those people too. It was as if they were like an extension of my own brain really, I didn’t need to be on the telephone asking questions they were doing. The crew chief, Julian Bolton, and I had a lot of success and I think about them a lot. Regardless of what was going on in the world our little package won a lot of races.”

“But it’s a new sheet of paper now,” he said. “I can’t look behind me, I have to look forward. I’ve been through hell and back but now it’s chapter two or three or four and it works, doesn’t it? Me and Norton? There’s so much history to Norton and people love those bikes - the older boys like them because of the connection they have to the past and younger race fans like them too because they sound so good. Last year I watched the Norton race at a few places and I could hear people saying, ‘the Norton’s coming’ and when it passed they’d say, ‘it sounds mint’.”

The bike’s capable of holding its own in the top field too, says John: “Josh Brookes isn’t stupid and he rode round on the Norton at 132mph. He’s not the kind of rider who would really do anything stupid, either, so for him to be safe and riding around at 132mph says a lot about the capability of the bike.” 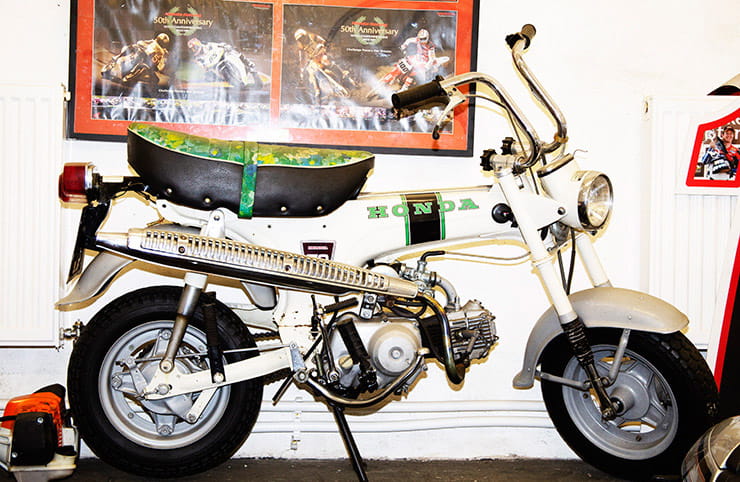 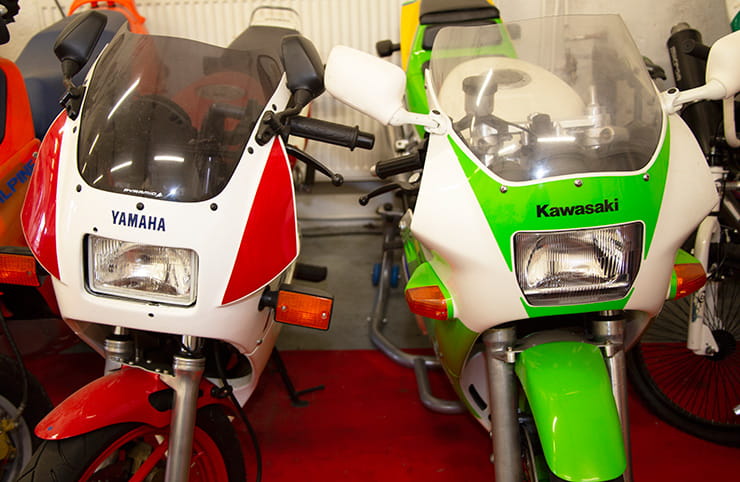 This year’s TT will be one of John’s most challenging. His two-year hiatus from road racing has coincided with TT racing raising its bar to new speeds of 134s and 135s. And there are many contenders for the podium, too - and all very different characters and riders too, as John explains.

“With TT riders, we’re all different people and we all have different strengths. With BSB there’s sort of a handbook but with the TT there is no handbook. You can be 14 stone or a little bit heavier or, you can be like Hicky, who’s strong and natural. Then there’s Dunlop, who’s feisty and makes it happen. Hutchy’s a great rider too - quite a ‘thinker’ when it comes to the TT.”

“All the domestic championships are transfixed on the right way to do it. They’re all in the same box, they’re on the same sheet whereas we’re all different at the TT.”

It’s clear that the TT is in John’s heart and soul (and not just from the abundance of TT books in his office): he talks about the Isle of Man, and the TT course, with an affection few other riders share, let alone display. As Guy Martin’s father, Ian - a former racer himself - once said, “that man has the TT running down his spine.”

“The Isle of Man is a lovely place and it gets hold of you. And the TT itself is an institution. You don’t come from Brazil, South Africa, New Zealand and Australia for nowt.” 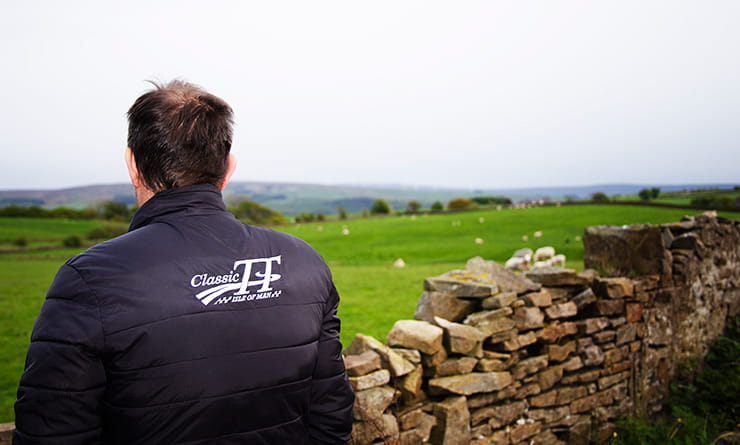 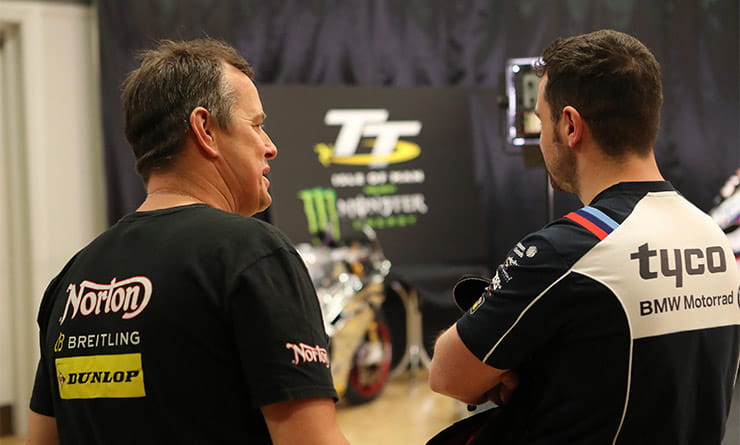 Above: The difference between home and work

This year will be John’s 23rd TT (minus one because of Foot and Mouth causing the event’s cancellation 2001). He said: “I don’t even know where the years have gone. I have no idea why I’m sat here with 23 wins - it’s mad, isn’t it? Somewhere there’s been some magic.”

BREAKING NEWS: John has signed a last-minute deal with the Milenco by Padgetts team to race in the two Supersport races in 2019.