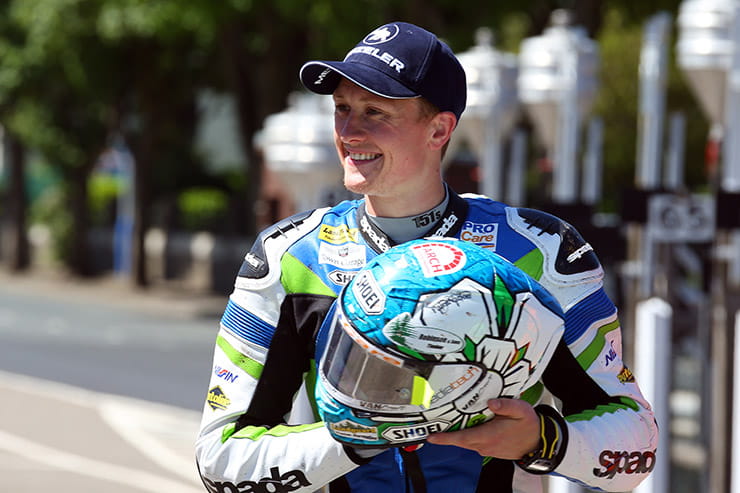 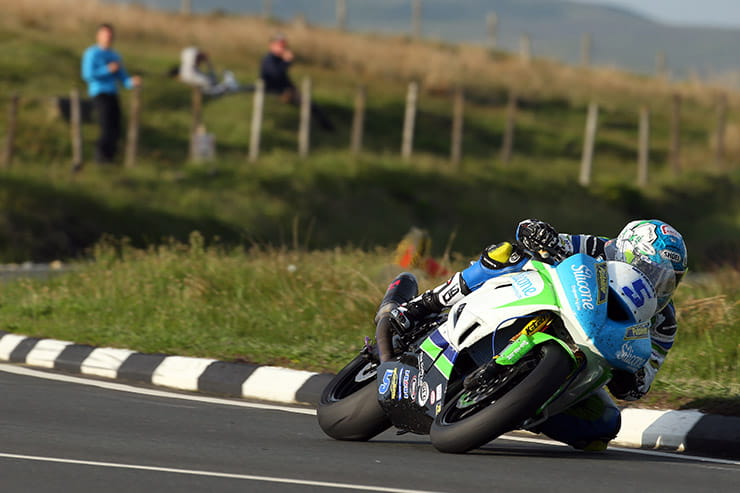 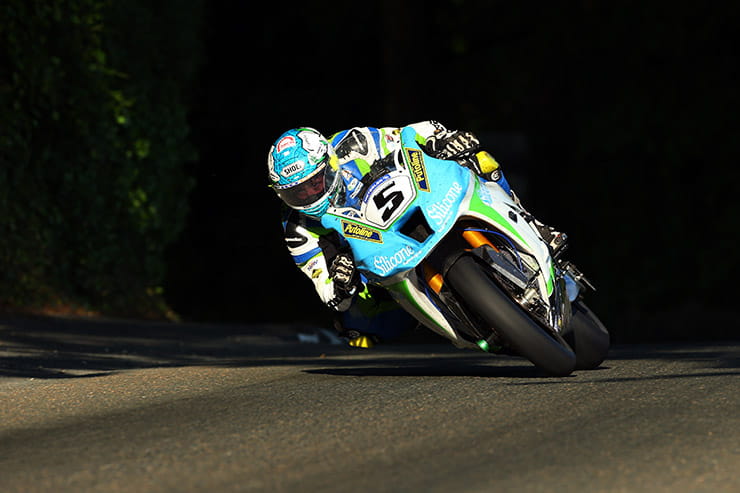 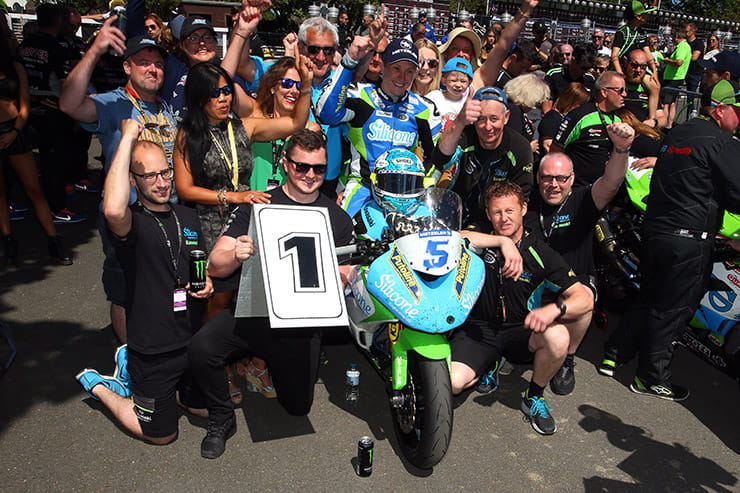 It’s only days away from the Isle of Man TT 2019 but fear not, BikeSocial has prepared an entire series of TT previews, from exclusive rider interviews to the top ten TT race machines ever. The world’s most exciting motorcycle race just got better, watch this space…

For TT fans, Dean Harrison needs no introduction. He’s one of the fastest racers in the event’s history, smashing Michael Dunlop’s sub-17 minute lap record and setting his own benchmark for stratospheric lap speeds. Now he’s hell-bent on tearing up the tarmac once again at this year’s TT. BikeSocial travel to the rider’s Cumbrian workshop as he prepares for 2019’s road racing season. 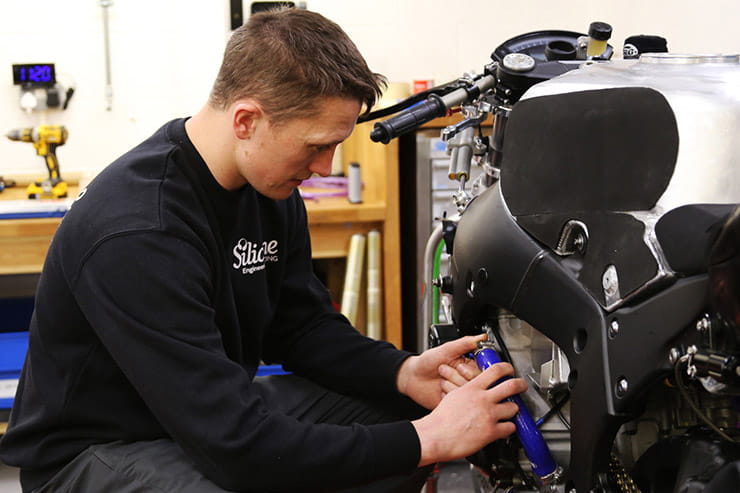 To understand Dean Harrison, you only have to take a look at the onboard footage from TT 2018. Here, Harrison blasts through the first sector of the course so quickly that the walls, trees, houses and lampposts lining the course appear to in fast forward mode. This is a man, after all, who, in 2018, was the first to smash Michael Dunlop’s 133.962 mph TT lap record with his own 134.432 mph milestone (from a standing start too). That record was soon broken again by Peter Hickman’s in the Senior race at an average speed of 135.452 mph. But broken, re-broken, and re-re-broken records aside, the fact remains that Harrison is a man to beat.

High velocity runs through Harrison’s fibres, however, both on and off a bike. Here’s a man who talks fast, walks fast, moves fast, thinks fast - so much that, in comparison, everything around him seems to operate at a glacial pace.

And this is certainly the case with the racing. Speaking specifically about the forthcoming Isle of Man TT, he said: “Your brain slows down at the TT as it adapts to going faster… When I stop everyone’s going really slow. Your brain adapts to that speed. For example I could pick your face out in a crowd while I’m racing: everything’s happening really slowly around me. But you do get used to this when you’re racing. It’s only when you crash that you start to realise how fast you’re going.”

This rapid, split-second thinking - required of any TT racer, let alone one in the top five - takes time to develop. “I find that you spend the start of practise week getting mentally ready and then by the time it’s Wednesday or Thursday of practice week you’re up to speed, mental wise.” 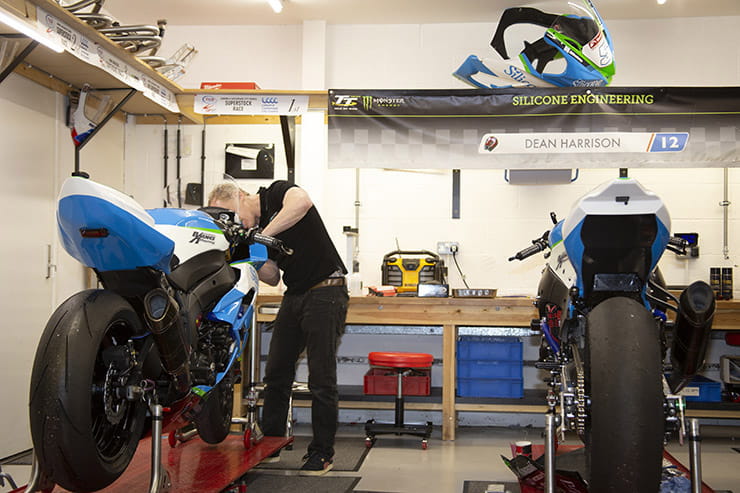 Above: A glimpse inside the Silicone Engineering race workshop

We meet Dean at Silicone Engineering Racing’s Kirkby Lonsdale workshop, just on the border of the Yorkshire Dales and few miles from the Lake District. The team’s serene location seems somewhat incongruous with the mechanical prowess of the three Kawasaki’s lined up in the workshop, eagerly being worked on by the team’s mechanics.

Dean has been with Silicone Engineering since 2016 - a team renowned for both its slickness and its Padgetts-style down-to-earthness. “Without the team around you you can’t do the job but with a good team you can make a mediocre bike look good. I’ve been here for years now so I’m part of the furniture.”

At this year’s TT Dean will be riding the 2019 version of the Kawasaki ZX10 RR in the Superbike race, along with the same 600cc machine he’s campaigned for four years. This is very much a team whose ethos is ‘if it aint broke, don’t fix it.’

The 2019 machine is, according to team manager Paul Iddon: “Very much the same as the 2018 version apart from the tweaks we’ve made. There are standard improvements to the 2019 machine, such as an engine with more revs but generally it’s very similar. Of course, we change things and alter things so ours is very much the ‘evo’ version with Maxton rear shocks and set up changes.”

In the road racing world, Dean has been turning heads for a long time. He started  competing when he was 18 years old but has been around road racing much longer as his father, Conrad, was - and still is - a competitive sidecar racer.

He said: “We didn’t really do a lot with my dad’s racing because we didn’t have a lot of money so we went to Scarborough, the TT and the odd short circuit such as Cadwell but that was it. My dad was a classic road racer in that sense. I didn’t really do a lot while I was with him at those meetings as a kid, apart from collect stickers. You don’t really pay attention to ‘owt that’s going on around you when you’re a kid in that situation; you’re in your own little world. It wasn’t until I was older I started paying attention and watching properly.”

The bug eventually bit him and now, 12 years later and with two TT victories up his sleeve, he’s the subject of many a bet for winning the Superbike and / or Senior TT. And it’s no wonder: in last year’s Senior race Dean diced for six laps with Lincolnshire rider Peter Hickman on his Smiths BMW in battle for pole position. Hickman won but Harrison led for the majority of the race - a race now considered one of most exciting in recent history by the likes of Carl Fogarty and John McGuinness.

But not for Dean. “It was boring,” he said. “Everyone says it was the big exciting race but I led for every single lap except the last one. The only thing that was exciting about that race was the fact I didn’t win.” 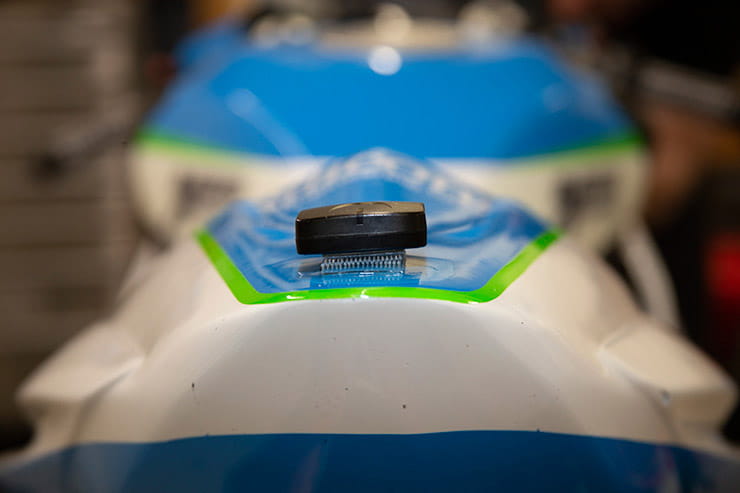 Above: the green Kawasaki machine, that’s painted in er, white and blue

For TT 2019 all riders - including Dean - are upping their game. In past years many TT competitors focused only on the roads but now riders such as Lee Johnston, Dean Harrison, Peter Hickman, James Hillier and Ian Hutchinson are competing in dozens of events and race series outside the North West 200 and the TT, such as BSB, enduro, trials - even mountain bike competitions - leaving little time for life out of the saddle. But this makes for even stiffer competition.

“There are so many potential winners now,” said Dean. “There’s Michael Dunlop, Peter Hickman, Lee Johnston’s on form, James Hillier is good… there are quite a few. Everyone’s doing a lot more short circuits now so they’re going to be a lot more up to scratch when they get to the Isle of Man.”

“There are eight / ten riders who could win so you can’t write anyone off and the TT always brings up something you’d never expect. That’s what makes it interesting. Year-on-year, the track changes, people change, people’s riding changes, the bikes change, teams change - there are so many variations before you get there that you can never predict it.”

Indeed not. And all the more reason to follow TT 2019. With Dean Harrison on top form, eager for a second TT victory, the battle for pole will undoubtedly be a fierce one. Harrison - and Hickman - have raised the bar in speed records and along with that the bar for very, very close racing. Roll on May 25…