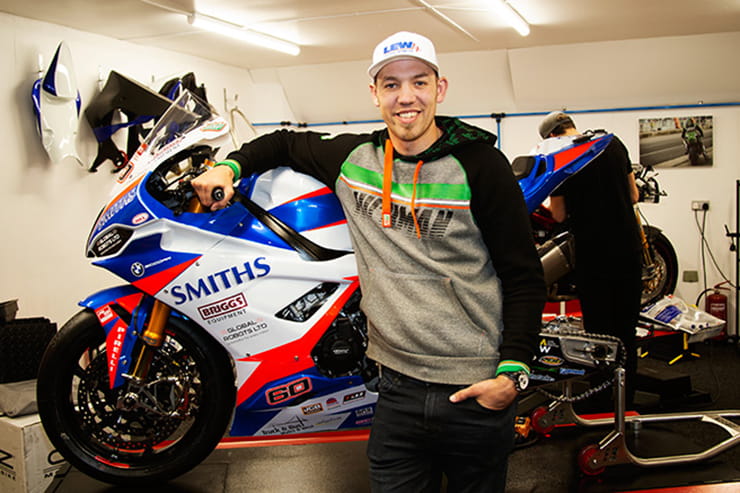 PETER HICKMAN obliterated Michael Dunlop’s sub-17 lap record in TT 2018, setting a new outright lap record and clinching two victories in the process. Now the Smiths BMW rider is back for another sensational TT. BikeSocial catches up with Hickman at his Louth unit ahead of the road racing season.

If Record Breakers was still going, then there’s no doubt Peter Hickman would be a repeat guest. Hickman has been setting TT records since his debut at the event in 2014, when he was the fastest ever newcomer with a speed of 129.104mph - a record that still stands today. Then, barely four years later, he blasted the mother of all motorcycle racing records: the fastest outright speed at the IOM TT, with an average speed of 135.452 mph.

It’s a number that’s tattooed on Hickman’s mind, not to mention his workshop wall. Here, at his slick industrial unit in Louth, hang three of the original painted slates from the IOM TT scoreboard displaying Smiths BMW rider Hickman’s outright fastest speed: 135.452 mph, his overall race time: 1h 43m 08s and his fastest lap time: 16m42.778s, respectively. These stratospheric speeds and shrinking lap times seem somewhat incongruous with the old-school ‘paint-on-slates’ scoreboard but this is a TT tradition that dates back to 1911. Only now, as a result of the TT’s rapidly-shrinking lap times, scoreboard  painters only have about 16 minutes to finish the slates. A painter in 1911, however, had a whopping 44.52 minutes to finish painting C.C Godfrey’s fastest lap speed of 47.63 mph (on the revolutionary two-speed gearbox Indian). 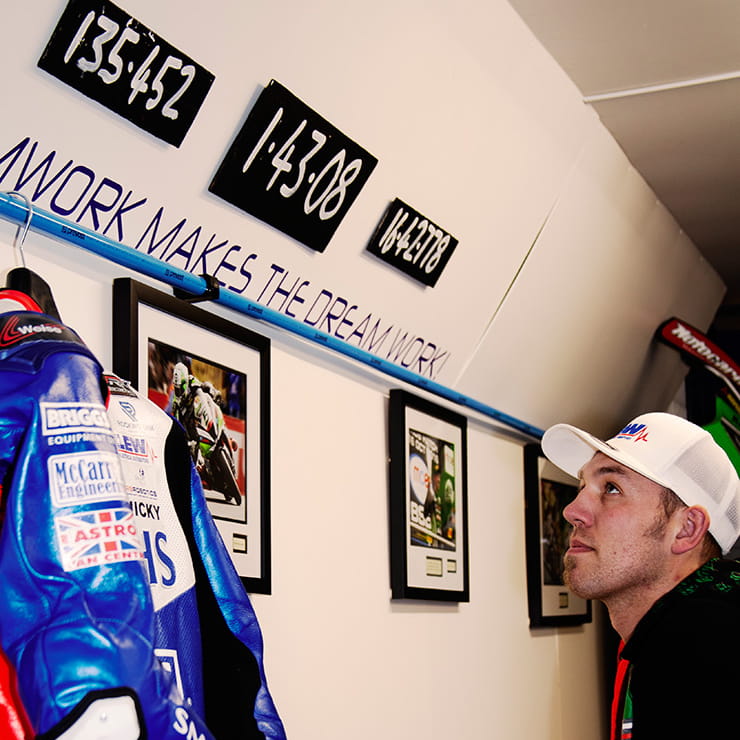 Above: Hickman and his 2018 record breaking ’slates’

Yet, despite being a competitive BSB rider and the current number one TT racer, Hickman is, in person, extraordinarily laid-back. “I don’t really worry or get anxious about anything - worrying is a complete waste of time,” he says. So laid-back is Hickman, in fact, that he even describes the TT as ‘relaxing’: “You’ve got these big long straights where you sit there for ten, fifteen seconds thinking ‘Yep, temperature’s all right, this is alright, that’s alright…’ So you have a breather. It’s very relaxed.”

“With BSB you don’t ever get the chance to be like that - it’s just constant attack, attack, attack, and if you even relax for a little bit you’ll have two people fly up the inside of you. But as the TT’s a time trial as opposed to a mass start, this isn’t a problem.”

Competing weekend-in, weekend-out in the Bennetts British Superbikes series has upped Hickman’s game at the TT and arguably set a new bar for other riders’ road race preparation. A huge majority of the top 15 TT racers are BSB riders or regular competitors. This was not the case, for example, in the 1990s, when the likes of Robert and Joey Dunlop ruled the roads.

But BSB is far from easy training. “BSB is harder than the TT. But what most TT fans don’t get is that the level of BSB demands that you are pushing a bike to its limits all the time. That’s not to say you’re not pushing it to the limit at the TT but at the TT you’re a lot more relaxed. Even when you’re absolutely on it!”

It’s the braking points that distinguish the TT and BSB most profoundly, according to the Smiths rider. “At places like Ballagarey you actually brake a bit earlier and run through the corner because you have a big long stretch after it, so you need the exit speed, not the entering speed. Later on the brakes and you may gain half a second going in but you’ll lose three seconds down the next straight. On the other hand, if you loose half a second going in you can gain two or three seconds on the straight coming out. And because you’re braking earlier it’s a lot more relaxed.”

“That’s how I see it, anyway, because I’ve come from a short circuit background whereas most people at the TT haven’t. So to them it is all frantic and late braking.” 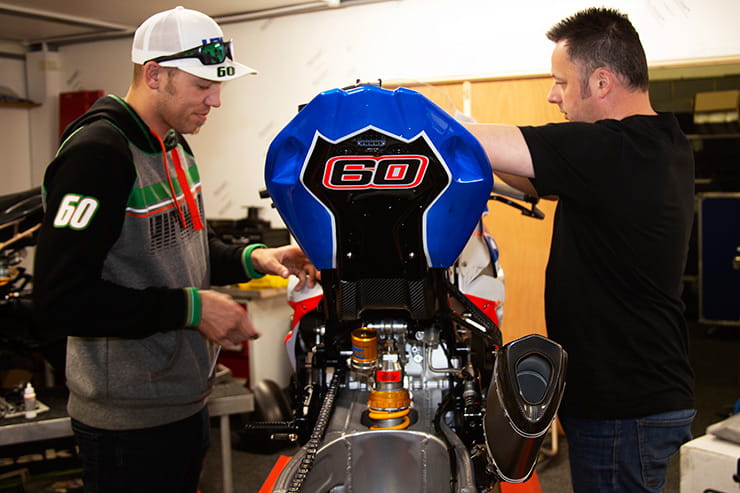 Above: Hickman works on the Smiths BMW with Crew Chief, Darren Jones

Equally relaxed is Hickman’s approach to machine preparation. We sit with a cup of tea in his unit - barely days from the TT - and the atmosphere is calm, relaxed and controlled - in spite of having only ridden the brand new TT Superbike - the 2019 BMW S 1000 R - for the first time only weeks ago.

“It’s all in-hand, really,” says Hickman. “The new BMW S 1000 RR is good enough to race as standard though as far as Superbike goes they are quite different to the road bike. Apart from the chassis and the engine everything else has been tweaked yet despite these differences the lap times are very similar on a Superstock, which is very close to a road bike.”

It was on the S 1000 RR that Hickman’s clinched his debut TT victories - the 2018 Superstock and Senior TT, which begs the question: why risk riding the new, untested model (which is a lot smaller than the 2018 machine): “There’s been a lot of talk about whether we should use the old bike but internally I’ve pushed for the new bike from the start. There’s been a lot of people - including some riders - who have said I should be using the old bike but how do you go forwards if you always stick with what you’ve got? I literally didn’t even think twice about trying the 2019 bike.”

Whatever model of machine Hickman races, there’s no doubting this year’s TT will be of a nail-biting variety, especially if TT 2018 is anything to go by. Last year saw some thrilling - and entertaining - rides from Hickman, including his detour around a tree in the Superstock race.

“That Superstock tree thing was because people were saying ‘you’re losing too much time starting off slow and you’re making yourself a lot of hard work because you’re not fast enough’ so I listened to them all and set off with a fast lap and I went past the tree at Braddan! I’m always slower on the first lap whereas Dean is faster out of the box - apart from last year and that’s when I ran on.” 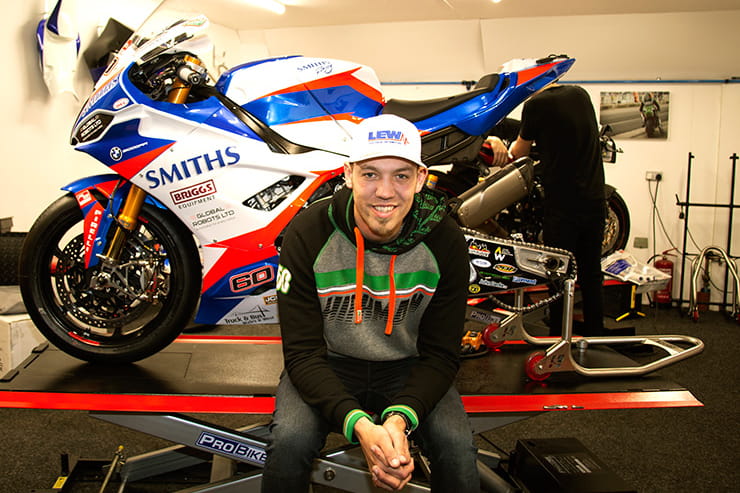 Hickman’s first TT was 2014 - the same year as his first BSB win at Cadwell Park - but racing’s in his blood. “My dad won two Manx Grand Prix and competed in the TT. I grew up around it, right from being young. I always wanted to but my dad was dead against it and always said ‘no’.”

Even as a child, Hickman was determined, however: “He would never let me have a bike so I bought my own when I was twelve without telling him and that’s how I started. I saved my pocket money for an entire year because I only got a quid a week. I sold my radio-controlled plane too and bought an AR 50 Kawasaki. I remember hiding it around the back of the house until I finally told him.”

The photographs of a beaming father David Hickman after Peter won the Superstock and Senior race last year suggest that all is forgiven for Hickman’s contraband AR 50.

And as for Hickman’s TT philosophy he says: “You’ve just got to relax and look where you’re heading. You can only look forward.”

This is a man, after all, who has few worries and few regrets, except one: flogging that AR 50. “I wish so much I’d kept it,” he says. 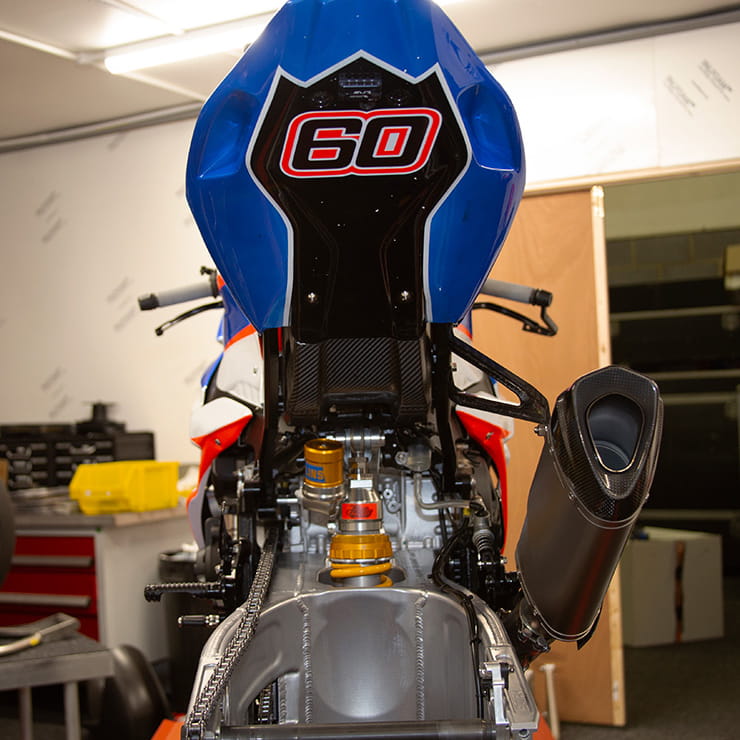