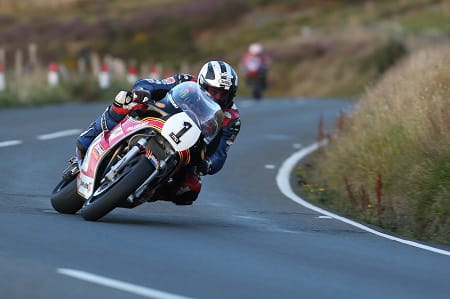 Perfect conditions surrounded the Isle of Man TT course for Tuesday night’s timed practice sessions and it was once again Ulsterman, Michael Dunlop top of the table improving his average lap speed to 118.772 aboard the Team Classic Suzuki.

Dunlop was chased in the Formula 1 class by Russ Mountford, also Suzuki-mounted, who improved to 116.534mph on the second night. Bruce Anstey was on the pace as he completed his first lap aboard the Valvoline Racing by Padgetts YZR500. The flying Kiwi’s first attempt at a lap on the iconic two stroke on Monday came to an early end as the bike packed up at Ramsey but come Tuesday a full circulation at 114.107mph proved no problem. It had looked as though Anstey would go quicker, with a whopping 128mph average speed up to Ramsey on his second flying lap but unfortunately the YZR500 hit more technical problems forcing him to pull up at the Cregg Ny Baa.

Gary Johnson made a bold statement setting the fourth fastest time with a 114.107mph lap showing the Lincolnshireman isn’t being held back by injuries sustained at this year’s TT back in June. 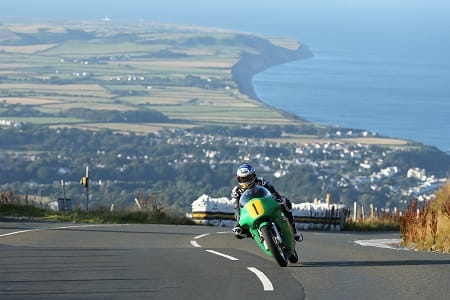 In the Bennetts 500cc class, John McGuinness continued to rule the roost. The Morecambe Missile edged closer to the 110mph lap on his Team Winfield Paton with a 109.846, just six seconds ahead of CNN/Flitwick Motorcycle’s Ian Lougher also aboard a Paton 500. McGuinness’ teammate, Ryan Farquhuar was third a further five seconds down with a 108.767 lap.

Jamie Hamilton set the fourth fastest time with an average speed of 107.327 on the Mv Agusta ahead of Michael Dunlop aboard the leading Manx Norton. William Dunlop was the leading Honda representative with a 105.521mph lap ahead of Alan Oversby. Bruce Anstey set the 9th fastest time ahead of the Paton-mounted Maria Costello rounding out the top ten.

Alan Oversby remained top of the 350cc times improving his average lap speed to 102.707mph ahead of Conor Behan and William Dunlop who are both yet to crack the 100mph barrier.