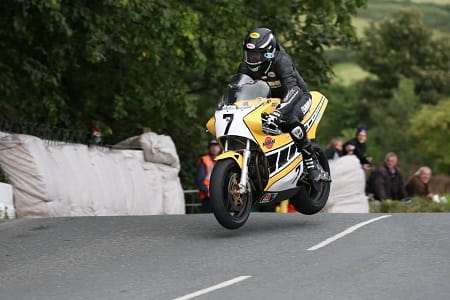 Gary Johnson returned to Isle of Man TT action this week just under three months after breaking a vertebra in a crash during the Superstock TT back in June.

Johnson, who won the Supersport Race with Triumph earlier this year, hasn’t raced since the incident and even pulled out of last weekend’s Ulster Grand Prix. However the Lincolnshire resident was determined to participate in the Classic aboard his Harris and MV Agusta machines. Technical woes put pay to Johnson’s MV Agusta campaign but the big 1100 is still in the game. Despite having only put in two laps over practice week, Johnson’s fastest lap so far this week is an impressive 117.426mph.

“The first lap I did on the bike we had a few issues two miles down the road so I had to keep stopping every few miles to check she was alright so I just wobbled round and got a terrible average speed!” said Johnson speaking to Bike Social.

“It wasn’t too bad as it let me ride and get a lap under my belt even if it wasn’t riding properly before going out the other night for a tumble round. That night however, the brakes were failing on the bike so I couldn’t fully push; I think I did a 114mph average. Wednesday night we set off and kept quite a bit in reserve, got held up a bit and we managed a 118mph lap.

“Being just four miles an hour off the front lads is good because I’m still struggling on the bike, I struggle on right handers and have to be really cautious. I reckon there’s time left in me, I’ve only had a couple of laps and that’s the first time the bike has really done anything around here. It’s great to be back on a bike with no pressure and gently plodding around. I’m not confident of making race distance as I’ve only done one lap at a time at the minute but we’ll see if I can, if I’m getting tired I’ll back off.”

Still far from fit, Johnson says riding a bike again his helping his recovery process as Classic Bikes aren’t as physically demanding to ride as the 220bhp he’s used to wrestling around the TT course.

“I’m in in the hyperbaric chamber every day at seven in the morning and two in the afternoon and I also have a bit of physio as well and it’s coming along alright. I’m still a long way from being right but we’re taking steps in the right direction and riding the bike is physio in itself. I’m not here in a competitive state at the minute, I wish I was but I haven’t ridden a bike for nine weeks! I can’t even lift my weights so I’m not fit in general never mind with the injuries so this is tiring.”