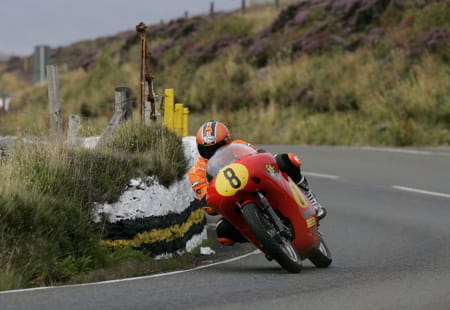 With a full grid of almost 90 entries, this year’s Okells Brewery 350cc race at the Classic TT  is set to be as closely contested as it is thrilling, with evenly matched machines and a stellar line up of riders offering the potential for a close race.

Last year’s race winner Chris Palmer is absent from the field, leaving Manx GP winner Roy Richardson on the FCL Racing/Bullock Motorsport Aermacchi as one of the favourites. However, the opposition is strong with anyone in the top 20 more than competitive and capable of standing on the podium.

In addition, numerous 250cc machines will be spread through the field – all competing for the new Phil Read Trophy. The T20 Suzukis will be expected to be the highest placed here, particularly in the hands of Alan ‘Bud’ Jackson, Karl Fox, Tom Jackson, Jeff Ward, Maria Costello, Dan Sayle and Billy Cummins. Dave Edwards (TD1C Yamaha) and Pete Symes and David Crussell (both Kawasaki) add further variety to the 250cc field.