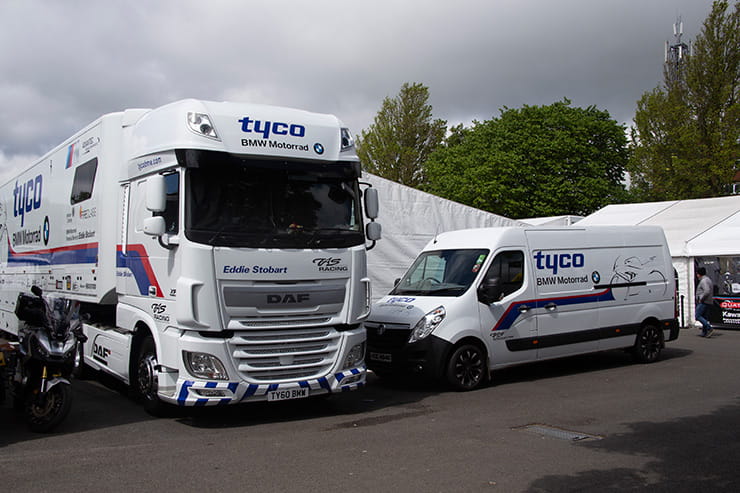 From man-in-a-van to the state-of-the-art Tyco BMW set up, the TT attracts all types of riders on all manner of budgets. But all are united by that magical stretch of 37 and three quarters that is the Isle of Man TT course. And for two weeks of the year, this cacophony of riders, families, teams and mechanics become neighbours - living in all manner of digs, as Rachael Clegg finds out…

Team Silicone Engineering Racing don’t mess about - even when it comes to its mechanics’ digs. The team, which sponsors Dean Harrison, has a full race truck-come-motorhome complete with lounge, kitchen, bedrooms and a bathroom in which three of its staff live for the entire duration of the North West 200 and TT, not to mention umpteen BSB meetings.

Spencer, the team’s assistant mechanic, has stayed in the truck throughout the North West and the TT. He said: “It’s alright actually. You get used to living in a truck and ours is quite fancy, it’s quite a good truck so it’s better than my house but you do get cabin crazy and I have been in there for nearly a month.”

It’s not surprising he finds it comfortable: the truck has a fully kitted out kitchen complete with all the appliances under the sun. “It has a microwave and everything you’d have at home,” he said. “It is almost as good as being at home but obviously you can’t just do what you want like you would at home because you’re sharing with other people.”

In addition to a swanky mini kitchen the truck also has a lounge area with huge flat-screen TV and leather suite. “It is good truck, to be fair - not and for a race truck and certainly better than a Transit van.”

The bedroom comprises four bunk beds and a wardrobe in the middle. “We never get the wardrobe space because Jonny (Bagnell – Crew Chief) uses it all - he loves his trainers!” The bathroom is a compact cubicle with a shower and toilet. “The shower is really good,” says Spencer.

But living in such close proximity to one another does have its challenges, as Spencer says: “I try and get into bed first get to sleep just to avoid hearing Bob (Gray – data man) snoring.” Thankfully, the team have discovered earplugs. 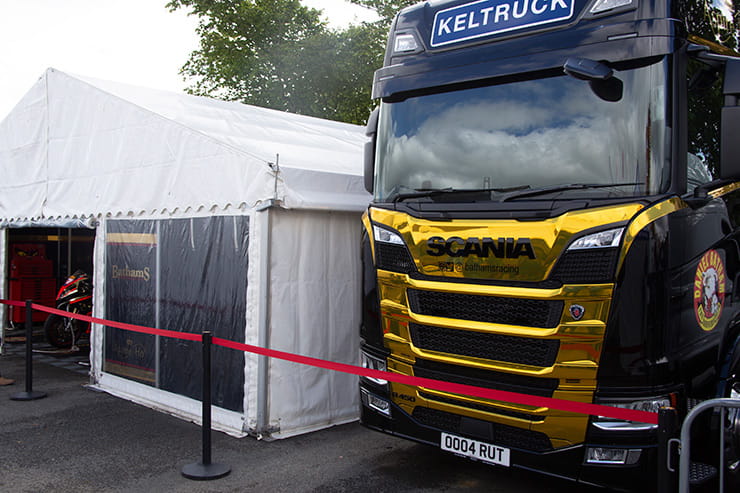 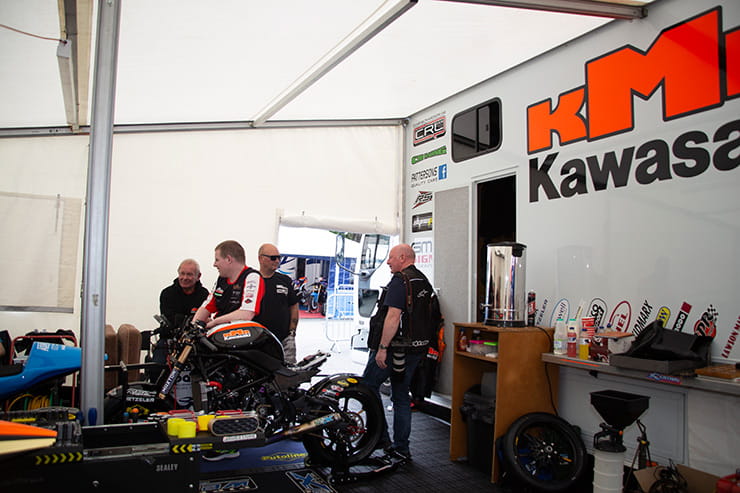 Then, on the next row of the top paddock stands Bathams KMR Kawasaki, which is run by TT winner and road racer Ryan Farquhar. Here, four machines are lined up in a makeshift awning-cum-workshop adorned with equipment and benches. Mechanic Neil Hopper, whose tasks include pitting for Lee Johnston - lives in the truck during the TT. He said: “It’s great, I have a bed, a kitchen and a bathroom - it’s a little bedsit and it’s so warm and cosy. It really is comfortable and I like the fact it’s my own space.”

Living and working in such close proximity to the team is made possible by the fact they all get on so well. “I’ve been with this lot for 13 years and have stayed with Ryan throughout. I wouldn’t stick it out if we didn’t all get on - it would be almost impossible otherwise.”

Hopper works in construction for his day job and uses his holiday time for mechanicing at the road races. He said: “I used to do the Ulster, the North West and other races but work’s too much now and I can’t take that much time off. “But I love helping at the TT and living in the truck is great. You get used to the small space and after a while it starts to feel like home from home.” 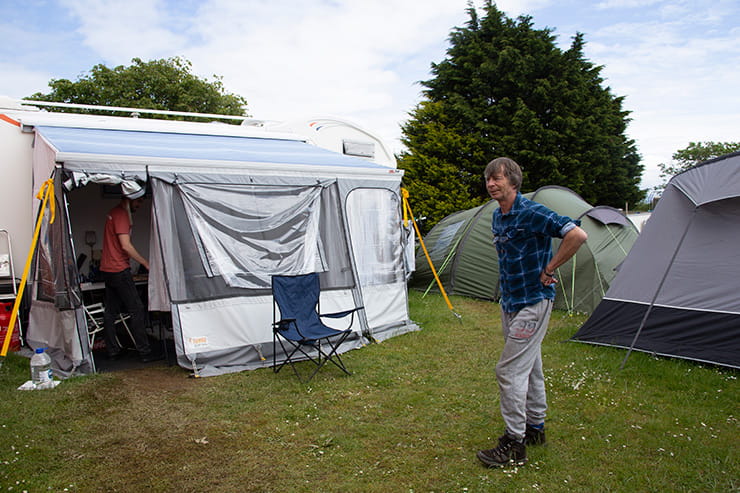 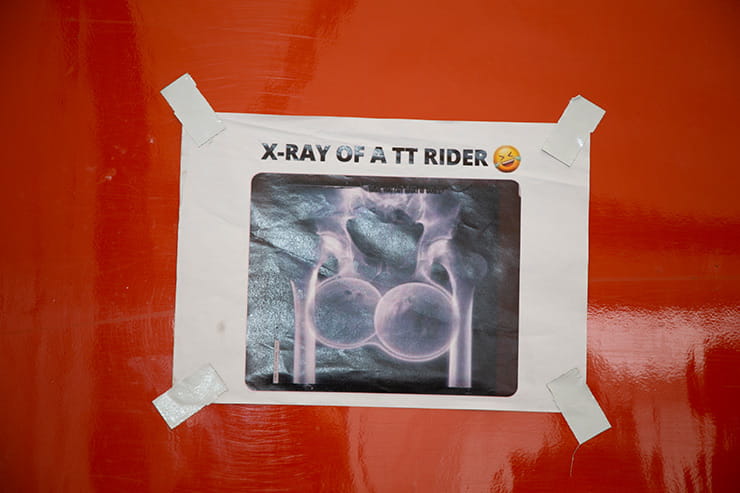 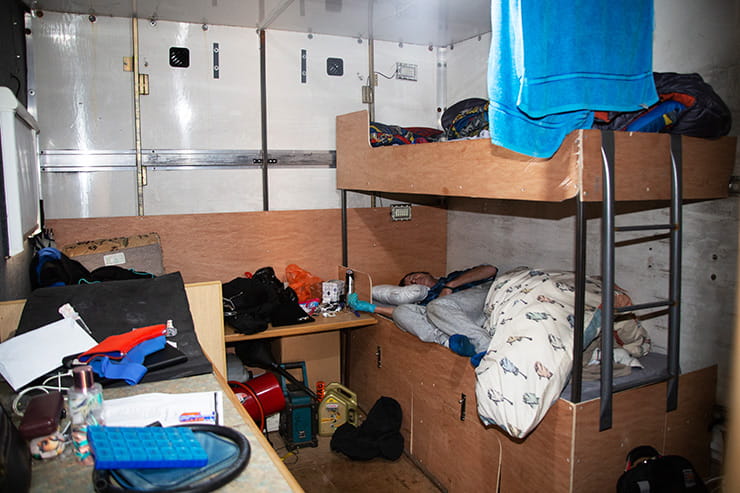 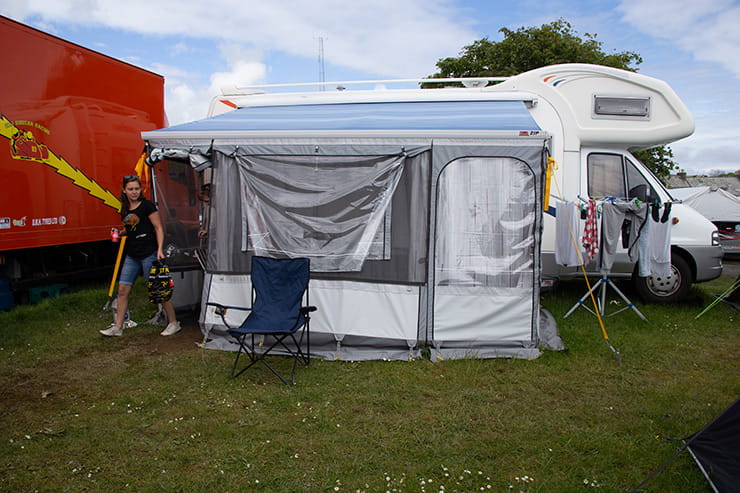 But it’s the bottom paddock where the really interesting stuff is: forget your slick awnings and leather-clad lounging areas, here you’ll find washing lines, non-PC posters the majority of sidecar racers base themselves, along with some of the privateer solo riders.

Among the competitors in the bottom paddock is Darryl Rayner and Wendy Campbell’s sidecar team HQ. It’s a wonderful maze of engines, sidecar outfits, a proper washing line, benches and rude decor (more of that later...). Rayner travelled from Australia - along with his passenger Campbell - to compete in this year’s TT. He said: “I first came to the TT in 2009 but and that’s when it got me. It’s an addiction - I’ve been coming back since.”

Rayner sleeps in the truck in one of two bunks with his teammate. “He insists I sleep on the bottom though. But we have everything we need and Wendy has a lovely motorhome at the back so we get all our food there.”

The awning and truck are adorned with notices and whiteboards on which mechanical reminders are scribbled. Then, just behind the sidecar outfit is an X-ray of a pelvis showing two giant testicles. “That’s the X ray of a TT rider - see the size of the bollocks, and that’s of Wendy!”

As he speaks, a drip from the roof falls on his head. “You see, very slick,” he says, with the aura of a well-travelled hippy circa 1969. In fact, the entire truck has something of retro feel to it, evoking the ‘rock-up and ride’ days of the Continental Circus days in the 60s and 70s, when even top riders slept in the back of vans. To top this off, he even has the The Animals' House of the Rising Sun blasting from the sound system. This is where the soul of the paddock is.

“We love it down here. There is so much camaraderie among the sidecar racers. One of my racing friends even lent us this race truck for the entire TT. It’s an amazing community, and it’s home from home.”

Indeed it is. And for two weeks of the year, the trucks, tents and awnings form a unique neighbourhood - a neighbourhood bound by the same affliction: the Isle of Man TT.