Costello on the Classic TT 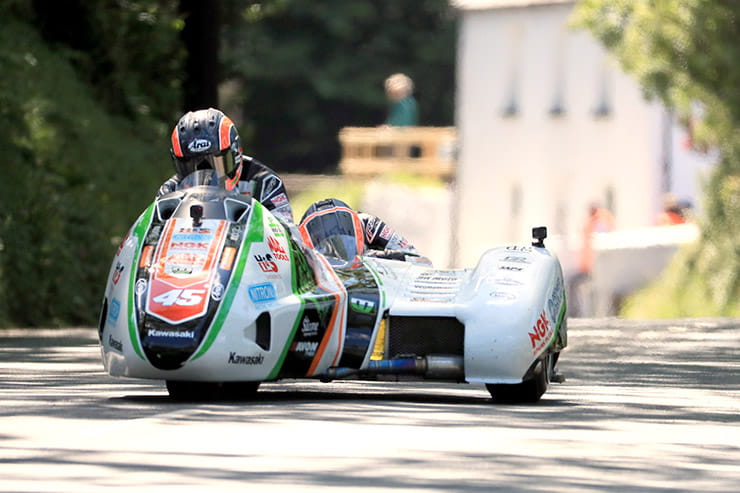 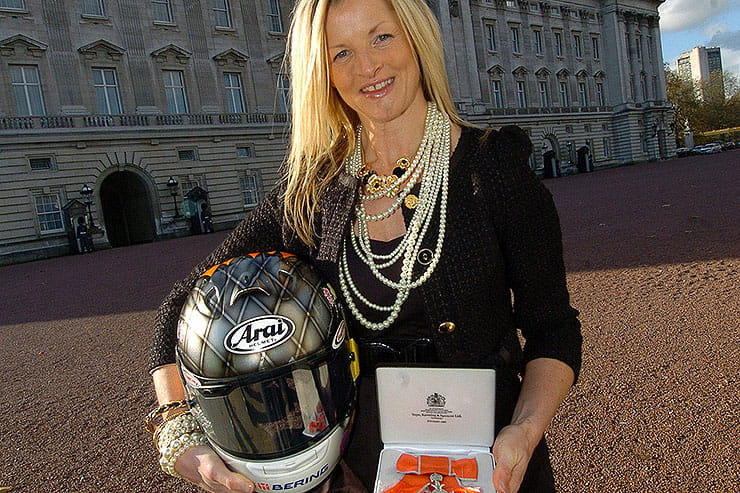 Maria Costello at the TT, and in 2009, collecting her MBE from the Palace

The much disrupted practice and race schedule has been causing bother for racers and spectators alike at the 2019 Classic TT but Maria Costello is one rider who is walking around the paddock with a smile like a Cheshire cat; she’s been riding her beloved GP replica Paton and acheived another 4th place finish in the Senior Classic TT on behalf of husband and wife Peter and Barbara Beugger. Costello’s in her element: she’s already had a podium finish and a P4 on the immaculately prepped Paton even before this weekend.

She said: “I’ve been riding the Paton since 2012 and it has definitely been the stand-out machine for the past few years, with the likes of John McGuinness winning on it. Ryan Farquhar also used to run one and that’s how I got to learn about them. The Paton’s an exceptional bike, it’s fast, it handles, and it stops and goes. I love riding it, and I really love riding it around the Isle of Man. Peter Beugger actually races it himself too and is extremely handy on it!” 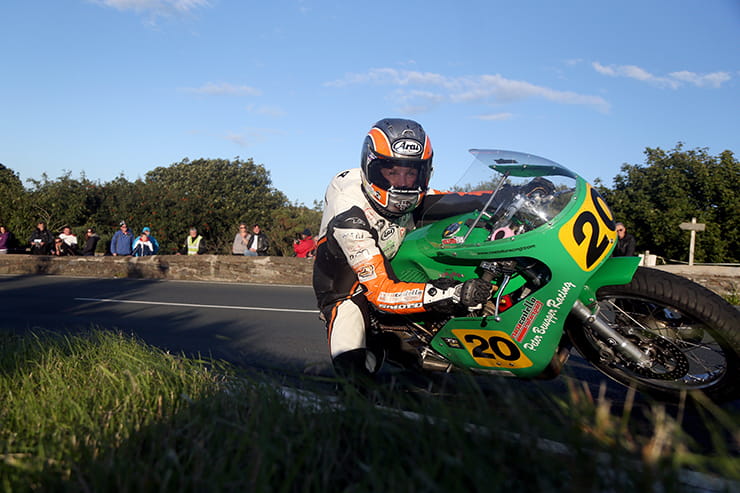 It’s not hard to understand how Costello has become a motorcycle racer: she has lived, and continues to live, at such a fast pace that it’s knackering just to think about her jam-packed life, let alone live it. She has, among other things, worked as a veterinary nurse, a motorcycle salesperson, a race mentor, stunt woman and even set up a women’s only track day. And then, of course, in between all that, she’s squeezed in the odd TT, along with 24 broken bones.

But it was another woman who kickstarted Maria’s obsession with racing: Sandra Barnett, as Maria recalls: “It was back before I had started racing but I think I was thinking of getting a race bike at the time. Me and my two mates Neil and Nick their mate Dave Weston had gone to Mallory Park to watch the racing. It was wet and we were watching from the back of a van and I saw what I thought was a woman rider and said, ‘Is that a girl?’ and they said: “Yes, that’s Sandra Barnett.” 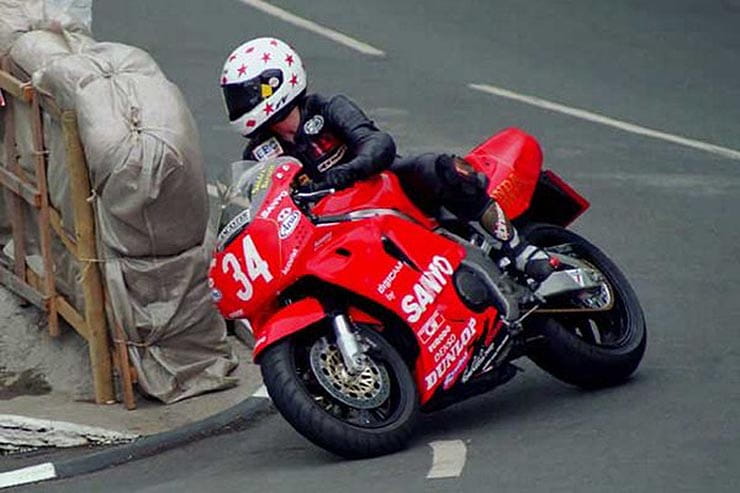 Sandra Burnett in the 1994 Production TT (Image from IOMTT)

Maria hadn’t always wanted to race motorcycles, however. In fact, she only took her motorcycle test as a means from getting from A to B. She said: “I first got a motorbike as a mode of transport. A family friend’s son had a motorbike and they were around one Christmas and his dad suggested that I get one. I was struggling to pass my car test - I think I passed it on my third time around and which was, interestingly, at the same time I passed my bike test.”

Despite taking her test initially as a means of ‘getting to work’, she was soon racing around the lanes of her local village. “Ultimately I fell in love with my TZ 125cc but then one morning on my way to work I got knocked off in my own village. I got some compensation money from the insurance and bought a race bike - much to my mum’s horror. I remember I’d gone from being a veterinary nurse to working in a motorcycle shop and everything became motorbikes.”

By 1996 she had started racing. “I was riding an RGV 250. I’d already won a race at Mallory and then Peter Barnett approached me and asked if I’d like to ride for an all-female team with Sandra Barnett.”

“So in the second year of my career I was racing the CBR 600 on short circuits and the plan was we’d race at the MGP and Sandra would race at the TT. So that was the year I went to the TT but my boyfriend really hurt himself and I remember saying ‘I’m never coming back to this place’.”

But she did go back. In fact, she went back later that year for the Manx Grand Prix.  “I rode for the team and we lapped at 100mph, but Peter Barnett wanted me and teammate Bridget McManus to start the practice session off but slightly against it because I didn’t want to be the first person to go down Bray Hill. I wanted to have someone to follow. But we had to do it. It was terrifying and all a bit of a blur, but I remember I was smiling by the end of lap three and wanted to race there.”

And this year - 23 years later - Maria became the first woman to compete in both a solo race and a sidecar race. She said: “It’s all about learning a new disciple and I’ve had such a long career - especially with the classic bike stuff - and now the sidecars have started creeping in.” 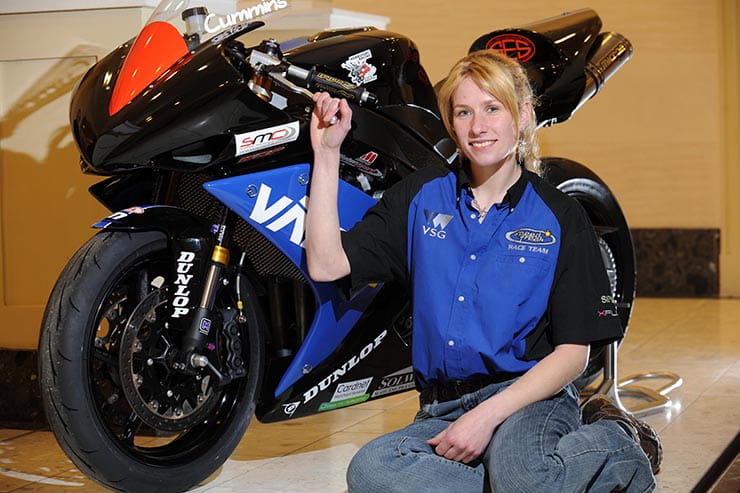 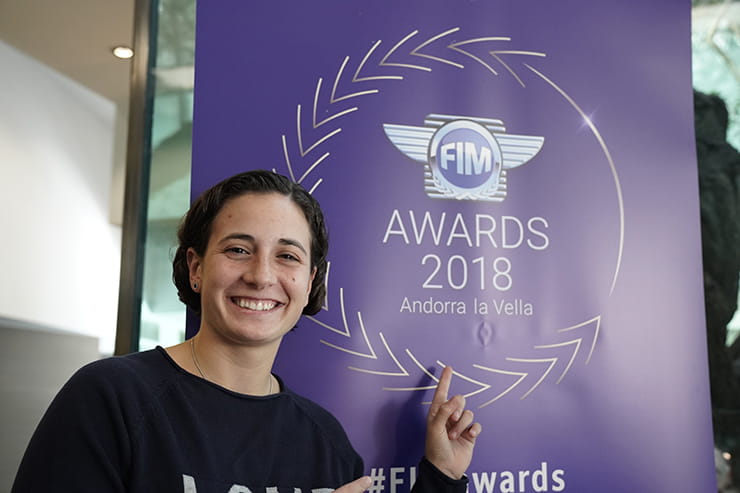 Of course, Maria is not the only woman in today’s motorcycle scene. Jenny Tinmouth is a renowned TT racer and in circuit racing Ana Carrasco has made recent headlines after winning the 2018 World Supersport Series. Maria said: “I think Ana Carrasco has done so much for the sport, but she’s has been around a long time. Suddenly everyone thinks she’s just popped up out of nowhere, but I’ve followed her career for a while and she’s been grinding away and making that happen for a long time. So for her to win that series the planets had to align because it’s a fiercely contested class.

Then, in total contrast to her racing life, Maria has also starred in a children’s film starring Christina Ricci and Reese Witherspoon called Penelope. “I was a stunt rider doubling for Reese Witherspoon and I loved every second - great work if you can get it. The film was called Penelope and it was a children’s film about a girl - played by Christina Ricci - who’s cursed with having a pig’s nose, believe it or not.”

As for Reese Witherspoon, she said: “I only met Reese Witherspoon on set very briefly but most of the time I was in her place, either for some of the static shots or setting everything up and then obviously for the riding. It was great fun and it was all filmed in London and they actually closed off some of the back streets for us. There was a scene in which the director wanted to put the camera on the kerb and film me riding past as close and as fast as possible, which I did. The director said: ‘that’s too close and too fast, you’re not at the TT now.”

And much like the making of a fantasy children’s film, racing requires a bit of fairy dust too. “Everything has to line up - to have the right team and the right team behind you, it’s like magic. And when it doesn’t work, you come back the next year and try again.”

She lives by her word, too. Last year Maria almost finished in second place in the Classic Senior TT on the Paton but mechanical issues forced her to retire. She backed up her pace with another 4th placed finish on Saturday during the 2019 Classic TT.