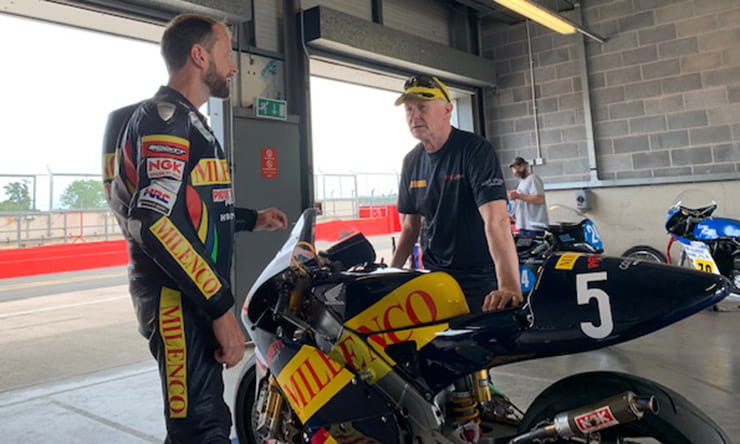 The top 20 seeded riders have been confirmed for the 4-lap Dunlop Lightweight Classic TT due to get underway at 15:00 on Saturday, 24th August around the famous 37.73-mile Mountain Course.

Heading the field down the Glencrutchery Road at number one will be Davey Todd for the Milenco by Padgetts Motorcycles team, with teammate, and fellow Honda RS250 rider, Bruce Anstey making his return to TT race action starting at his customary number five.

Clive Padgett’s team has won every year since the class – primarily for 250cc 2-stroke race machines – was introduced to the Classic TT presented by Bennetts in 2016, with the returning Bruce Anstey triumphant in 2016 and 2017 and Lee Johnston taking the honours twelve months ago.

Harrison made his debut in the class in 2018 finishing just off the podium in fourth. Meanwhile, Lougher has stood on the rostrum in each running of the Lightweight Classic TT, taking second place in 2016 and 2017 and a third place in 2018. Phil Harvey completes the trio of yellow and white Laylaw machines, lining up at number 12.

Michael Rutter is set to start at number 4, but the seven-time TT winner and two-time Classic TT winner has yet to reveal what machine he will be riding.

Starting at number six is Joey Thompson, the first of a three-man fleet of Honda RS250s for John Chapman Racing, with teammates Dan Sayle and Ryan Kneen starting at numbers 10 and 11 respectively.

2-stroke specialist Gary Vines will start at number seven on one of the three Binch Racing Yamaha TZ250s. With a personal best lap speed just shy of 115mph, the 29-year old could be an outside bet for a podium among the more familiar TT names.

Vines is joined in David Binch’s team by Jamie Coward – enjoying a fruitful 2019 season - starting at number 8, as well as last year’s winner Lee Johnston, who starts at number 13. Johnston will be onboard the same TZ250 that Adam McLean finished second on – behind Johnston – twelve months ago.

Tickets for the 2019 Classic TT are now on sale via the Official iomttraces.com website including Official Grandstand Tickets, VIP Hospitality Experiences, and Official Entertainment Events including the Counterfeit Stones Classic TT Party Performance. You can stay up to date with all the latest Classic TT news by subscribing to the Official Isle of Man TT Races Newsletter.