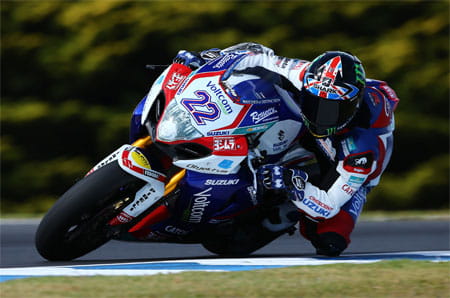 After he beat Shane Byrne to the British Superbike title in 2013 in spectacular fashion, there’s every reason to have high hopes for Alex Lowes’ assault on the World Superbike Championship this season.

With one World Championship trophy already on the Lowes’ twins mantlepiece courtesy of twin brother Sam, there’s absolutely no doubting there’s talent in the family name. Alex hasn’t wasted time in showing it either, as he set the fastest time at the Portimao test towards the end of last month.

Having set the fifth fastest time on Day 1 in testing at Phillip Island, despite having never seen the circuit before, Lowes’ chances seem somewhat promising.

With no doubt about talent, the only question mark on his 2014 challenge hangs over the bike he’s riding. The Suzuki GSX-R1000 has achieved limited success in recent years, but Paul Denning’s Crescent outfit are pulling out all the stops to put together a competitive package. The way he's gone on day one of testing, it certainly seems to be clicking together.

With new rules for 2014 including a limit on the number of engines a rider can use, the gap to the high-horsepower Kawasaki and Aprilia should be reduced, couple that with Lowes’ raw speed and the twenty-two year old Brit certainly has a fair chance.

Fighting for the championship might be a long shot, but it’s not a complete impossibility. The Lincolnshire lad should certainly be destined for podiums if not race victories this season, especially at the circuits he knows.

Speaking to Bike Social in January, Lowes said: “I just want to do my best from the start of the season, although I’ve got a great benchmark and someone to aim at in my team mate [Eugene Laverty]. He’s just finished second in the world so it won’t be easy and I’ve got the tracks to learn! I’d like to be as close to the front as I can and if everything goes well we shouldn’t be too far off fighting for podiums but my first target is to get as close to Eugene as I can.”