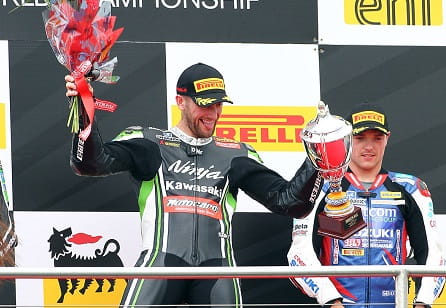 In a repeat of 2013, Tom Sykes stormed to double victory at Donington Park today. However it wasn’t as straightforward to last year for the Huddersfield grinner after a tough qualifying saw him face the challenge of fighting through from the third row of the grid. On top of that, he had his eager team mate, Loris Baz breathing down his neck all weekend.

Keen for a good result on home soil, Alex Lowes charged to the front into Redgate in race one but it was the Aprilias of Sylvain Guintoli and Marco Melandri leading as they came down the craner curves for the first time.

Lowes wasn’t going to give up though, taking the lead again onto the back straight but the Lincoln born youngster was being pushed hard by Loris Baz, who traditionally goes well on British soil. Baz momentarily took the lead but was forced back by Lowes, also losing a place to Sylvain Guintoli. The elder Frenchman took the lead on lap three, with Baz back into second at the Melbourne loop. Pushing hard, the Kawasaki man clinched the lead from his compatriot at the old hairpin.

Eugene Laverty’s tough season got a little tougher as he had a nasty highside at the Fogarty esses. Desperate not to see a result slip away, Alex Lowes fought back into second before setting the fastest lap of the race in an attempt to chase down Loris Baz, who was slipping away ever so slightly. Behind Lowes was an intense three man scrap for the podium formed of Guintoli, Melandri and Davide Giugliano, who got the better of the Aprilias going into lap nine. Bettering Lowes’ fastest lap, Giugliano managed to gap the Aprilias and get right on the back of the Voltcom Crescent Suzuki lad who in turn had caught up with Loris Baz. Giugliano pulled a slightly risky move on Lowes into the old hairpin to secure second position. On the limit, Giugliano nearly lost it through the esses but maintained position. Giugliano looked up the inside of Loris Baz at Goddards heading into lap eleven, but lost out to the superior speed of the Kawasaki on the straight. 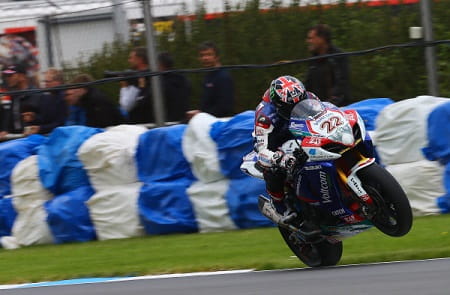 Making up lost ground, Tom Sykes passed Sylvain Guintoli for fifth at the esses, forcing the Frenchman to cut the chicane. The World Champion went on to take fourth from Melandri the following lap.

Giugliano pushed Loris Baz wide into Melbourne but the Frenchman fought back hard into the following loop to continue commanding the lead. Ducati’s Giugliano crashed out of second place at the esses on lap fifteen, elevating Lowes to second and Sykes to third.

Setting the fastest lap of the race, Sykes took Lowes for second place on lap seventeen. The only rider setting laps in the 1’28 barrier, Sykes demolished the 1.5 second lead between him and his team mate in just two laps. Sykes takes the lead into Goddards heading into lap 21. Baz wasn’t going to make it easy for the Yorkshireman, stuffing it back up the inside at the old hairpin. Sykes retook the lead as his team mate went slightly wide at the Melbourne loop but desperate for his first win of the season, Baz tried to get the lead back at the old hairpin but a relentless Sykes was having none of it. 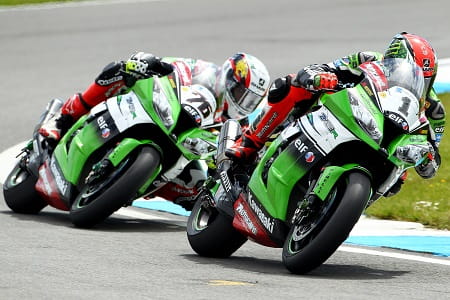 Baz went wide again into the Melbourne loop allowing Sykes to pull a bit of a gap into the final lap to take victory, with Baz second and Alex Lowes taking a podium on home soil. Marco Melandri finished fourth ahead of Chaz Davies and Jonathan Rea with Guintoli, Haslam, Elias and top EVO rider, David Salom completing the top ten.

Once again it was the Aprilias taking the lead in the early stages of race two, this time managing to maintain it for the first lap as a number of bikes collided at the Melbourne loop, fortunately they all managed to stay on. Loris Baz settled into third ahead of Alex Lowes and race one victor, Tom Sykes.

Loris Baz passed Melandri for second on lap five, before drama struck as tipping into the Melbourne loop Alex Lowes clipped the back wheel of third placed Marco Melandri sending both riders into the gravel. 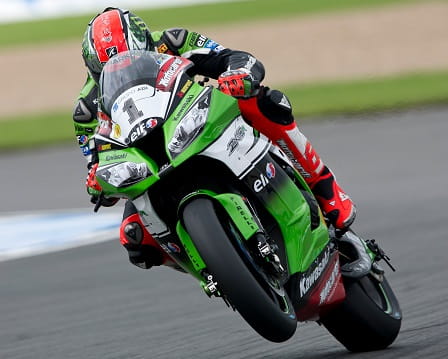 The front three of Guintoli, Baz and Sykes were able to stretch a comfortable gap ahead of Davide Giugliano in fourth, but it was Tom Sykes lapping faster than his rivals. Baz took the lead on lap eleven at Goddards and despite Guintoli’s best efforts, he couldn’t manage it. A rapid Tom Sykes then passed the pair of them to re-ignite the Kawasaki battles of race one.

Sykes laid the gauntlet down at two thirds distance and despite Baz’ best efforts the Yorkshireman’s pace was too consistent and the gap got bigger and bigger as the race went on. He eventually took victory from his team mate by two seconds with Aprilia’s Sylvain Guintoli in third. Davide Giugliano recovered from his early race incident to fourth place ahead of his team mate, Chaz Davies and PATA Honda’s pairing of Jonathan Rea and Leon Haslam. Toni Elias took eighth ahead of Voltcom Suzuki’s Alex Lowes, who made an amazing recovery from his earlier crash. Once again top EVO rider David Salom rounded out the top ten.