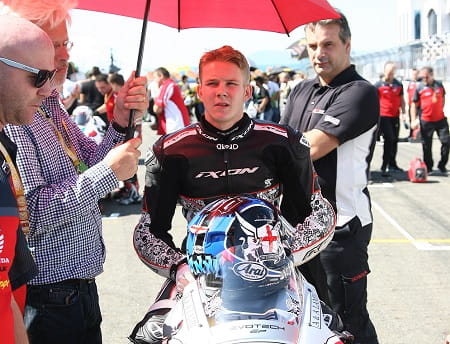 Former Moto3 rider Danny Webb is asking for the support of his fans to help him get back on track next season as he looks to compete in the World Supersport Championship with PTR Honda.

Webb and the team have launched a crowd-funding scheme in the hope of raising £150,000 to secure the Kent rider’s spot in the 600cc World Series.

You can support Webb’s 2015 plans for just £20, which will get your name on his garage boarding, an exclusive signed poster and the opportunity to attend a number of exclusive events, including an end-of-season party should he finish in the top three overall. For slightly larger sums they are giving fans the opportunity to purchase merchandise such as exclusive Danny Webb t-shirts and a VIP experience at the 2015 British round of the World Superbike Championship.

“And I really do mean you’ll be part of the team. I’m talking name on the garage boards and exclusive benefits all season long. If I get on the Championship podium – which is a realistic goal – then I’m going to throw a party and all my supporters will be invited and I’ll be buying the first drinks as a big thank you.”

The 23-year-old competed in 125cc/Moto3 Grand Prix until he lost his ride midway through the 2013 season before he moved to join the Simon Buckmaster-ran PTR squad in World Supersport.

For 2014, Webb opted to turn his attention to the international road racing scene, competing at the North West 200, Isle of Man TT and Ulster Grand Prix plus selected rounds in the British Supersport and Superstock championships. His roads debut was reasonably successful with a best result of 14th in the BikeNation.co.uk lightweight TT. Webb’s season ended early after a crash at the Ulster Grand Prix in which he suffered multiple fractures.

To make a contribution, simply donate via your bank directly to Performance Technical Racing at Lloyds Bank account number: 27227660 sort code: 30-65-86 or via PAYPAL to info@performancetechnicalracing.co.uk or send cheques made payable to Performance Technical Racing to PTR, Unit 4A, Alnwick Court, Warwick Road, Louth, Lincolnshire, LN11 OYB. Don’t forget to note your name (for the garage board and website) and address (so we can get the signed poster to you) and an email address for all the news/video/picture updates.