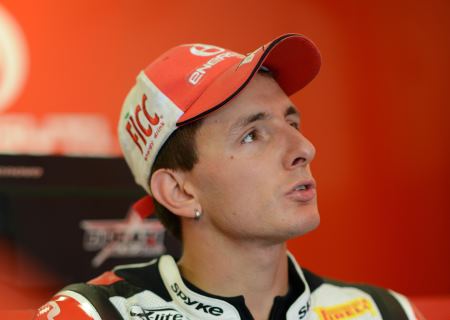 Following yesterday’s announcement that Alstare were to create a new Global Racing Department for Bimota, it has now been confirmed the Belgian outfit will run two BMW engined Bimota BB3’s in the 2014 Superbike World Championship.

Alstare had a long and successful relationship with Suzuki in the World Championship before withdrawing at the end of the 2011 season after support from the Japanese manufacturer became less and less. The Francis Batta run squad returned with Ducati last season although the team could only manage a single podium with Ducati’s uncompetitive Panigale.

Ayrton Badovini will remain with the squad and is joined by Brit Christian Iddon, who makes the move from the World Supersport championship.

“The early part of this year is going to be a bit difficult because of our late start, but having said that, I’ve got such a good team backing me, I know we can do a good job” commented Badovini.

“Although the BB3 is a new bike, I know the engine characteristics very well, from my two years with BMW in 2011 and 2012. It is a nice engine – fast, but very usable at all speeds. I don’t think we’re going to need to do a lot of work on the engine, which leaves us to concentrate of the rest of the package.”

For me, this year is a lot about improving the bike and being ready for next year and in this respect I’m sure that we’ll do a good job. I’m really, really happy to be back with Alstare again and feel I am returning to a family I know well. The team is very professional. I learnt a lot from them last year and expect to learn more from them this year. If things go well, and I see no reason they should not, my target is to develop the bike quickly and win the EVO title this year.”

“This is an amazing opportunity for me and I am very excited about the challenge ahead. Alstare is a famous team, with a big history and I am sure that I am going to learn a lot from them. They have loads of experience and that is going to help me, in what is going to be a very interesting season” added Iddon.

I have ridden a Superbike before, four rounds in the British Superbike Championship, but I know the new Bimota BB3 is going to be very different to what I am used to. Although we are starting from scratch, as long as we can find a good base setting we can progress quickly. I think many teams in this year’s championship are new and probably have not done much testing, so we’re going to be in the same boat as them.”

I don’t like to talk about targets, but I always set high goals for myself and this year will be no exception. I would like to think we’d be challenging the top guys in the EVO class well before the latter part of the season and I’d be disappointed if we weren’t. I know I’ve got a great team behind me and I am looking forward to working with them and maybe surprising a few people.”