The return of Noriyuki Haga 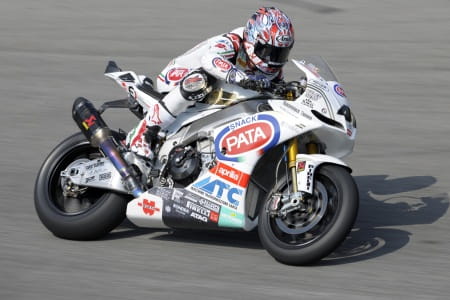 At the end of May it was announced that Noriyuki Haga would be making a return to the World Superbike Championship at Imola for a wildcard appearance with the Grillini BMW team. Before leaving the series at the end of 2011, Haga had been on the world superbike scene for almost 20 years and in many of those years he was at least a contender for race wins, if not the championship. Often referred to as one of the greatest riders ever to have not won a world title, Haga finished runner-up in the series three-times. It was after losing out on the title narrowly to American, Ben Spies in 2009 that Haga’s strong form began to falter. After only achieving just two wins and only a handful of podiums in two years, Haga left the series in 2011 and signed for Shaun Muir’s Swan Yamaha squad in British Superbikes, but that didn’t go to plan either... Here we take a look at some of the highs and lows of Haga’s career and discuss his chances ahead of his return this weekend at Imola.

It was 1996 when Haga first made his impression in the World Superbike championship, wildcarding at the Japanese round, Sugo, he took a podium in his first race and a year later he was chosen to replace an injured Colin Edwards taking his first win, a couple more podiums and a full time ride with Yamaha for the following season. In his debut season, Haga won five races and finished sixth in the championship. The same year he rode as a wildcard for Yamaha in the Japanese Grand Prix, where he unexpectedly finished on the podium. Despite a couple of attempts at the MotoGP championship in later years, this was to be Haga’s only Grand Prix success. It was in 2000 that Haga stepped up to challenge for the WSBK title, however his attempt was thwarted when he tested positive for a banned substance; Ephedrine. It was later revealed that the substance occurred naturally in a herbal supplement Haga used during the off season and while punishment was reduced, Haga was still docked 25 points and forced to miss the last round at Brands Hatch meaning he would lose out on the championship to Colin Edwards.

After a brief period of switching from WSBK to MotoGP and back again twice, Haga returned to the WSBK full time in 2004 with the Renegade Ducati squad, finding himself contending for the championship and finishing the year in third. For 2005, Haga returned to Yamaha to ride for their factory supported team where he took third spot in the championship in both 2005 and 2006, while losing out on the 2007 title to James Toseland at the last round of the season at Magny Cours despite winning both races.

After yet another third place in 2008, Haga switched to Ducati for the 2009 season to replace the retiring Troy Bayliss.  In his best season to date, Haga took 19 podiums including eight wins and lost out on the title for a third time by just six points. Returning with Ducati in 2010, he took only two wins and finished sixth in the championship. Ducati withdrew from the series for 2011, meaning Haga would join the PATA Aprilia squad. He endured a difficult season, failing to finish numerous times and despite taking four podiums he found himself without a ride at the end of the season.

Eager to re-find his form, Haga stepped down to the British Superbike championship in 2012 to ride for Shaun Muir’s Swan Yamaha outfit alongside reigning champion Tommy Hill. Former MotoGP rider, John Hopkins had stepped down to the British domestic series in 2011 and came close to winning the title and the plan was for Haga to emulate this success. This didn’t happen, a poor season saw him take only one podium and finish a mere eighth in the final standings.

Haga found himself a without a ride for the 2013 season, with many expecting an announcement of his retirement. After months of quiet, it was announced he would be part of an all-veteran Team Kagayama for the Suzuka eight-hour endurance race, alongside Kagayama himself and 1993 500 Grand Prix champion, Kevin Schwantz. A few weeks later, whispers of Haga returning to the Superbike scene emerged with Grillini Racing confirming a wildcard appearance at Imola for the Japanese rider.

Reasons for the wildcard are unclear, however some expect it is some sort of ‘audition’ for a full-time ride for the team. Our question is whether the audition is for Haga or the team… Grillini racing don’t exactly have a brilliant record in the World Superbike series, Aussie Mark Aitchison left the team for a BSB ride last year and this year, Vittorio Iannuzzo has only finished inside the points twice. That being said, Haga has a strong record at Imola, where he won in 2011 with Xerox Ducati and finished on the podium twice in 2011 with PATA Aprilia.

One thing’s for certain, Haga’s return to the World Superbike championship is hugely welcome and many are looking forward to seeing him back out there… we just hope we’ll see the Haga we’ve loved over the years back at the sharp end rather than going round in devastatingly depressing circles at the back…