Strong day for the Brits at Nurburgring 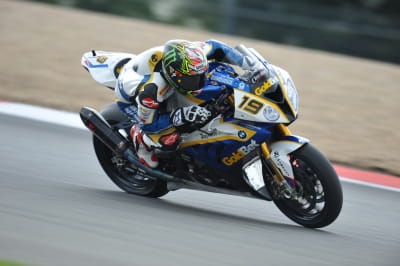 The Superbike World Championship resumed after its Summer Break this weekend in the Eifel mountains at the famous Nurburgring. Infamous for its apparent microclimate, the Eifel weather held out for the majority of the weekend with the exception of one shower during Superpole. This shook things up a little, placing Ducati’s Badovini on pole position.

Come race day, the sun was shining. A huge fall for Loris Baz in the warm up session saw him taken to hospital and subsequently ruled out of both races with two broken vertebrae (in his own words though, he’s “OK”) meaning anyone starting the first race from fourth or below moved up a spot. BMW’s Chaz Davies took advantage of this, as he shot from sixth place on the grid to third at the first corner behind Tom Sykes and Marco Melandri. Sykes soon got ahead of Melandri and tried to make a break. Unfortunately, the Kawasaki man was unable to shake off the two BMWs despite the pair dicing with one another on multiple occasions.

With six laps to go, Chaz Davies stole the lead from Sykes and his team mate followed through. After a couple of laps of intense action, it was Melandri who found himself in the lead from Sykes and Davies. It was set to be an incredible last few laps, however Jonathan Rea and Leon Camier crashing on oil left by Federico Sandi brought out the red flags to end the race. The rules state the race result goes back a lap when the red flag is drawn; meaning Sykes took the victory from Melandri and Davies. Rea and Camier weren’t so fortunate; PATA Honda rider Rea suffered a broken femur while Camier was subject to heavy bruising on his spine.

In the second race, the Goldbet BMW’s made yet another good start, with Melandri in the lead from his team mate. Eugene Laverty and Tom Sykes followed closely while the BMWs fought each other for the lead. Chaz secured the lead on lap sixteen and didn’t look back as his team mate came under pressure from Aprilia’s Laverty. Unusually, as in the first race, the race was drawn to an early close on the penultimate lap as the red flag was brought out after a crash for wildcard, Matej Smrz. The result was confirmed as Davies taking the win from Laverty and a somewhat miffed Melandri.