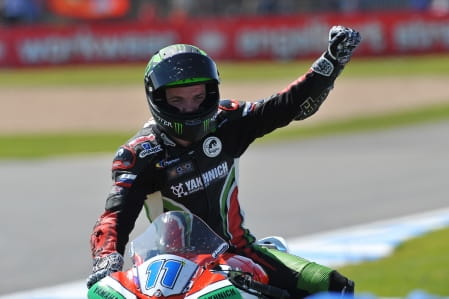 Britain’s Sam Lowes has won the 2013 World Supersport Championship with one round spare after taking a stunning second place finish in Magny-Cours. Lowes was very much in the mix for the race throughout, despite needing just two points to clinch the championship should Sofuoglu have won.

In the end the race was red flagged with Sofuoglu ahead of Lowes with Christian Iddon in third on the MV Agusta.

With the exception of a DNF at Aragon, Lowes has either won or placed second at every race this year, compared to rival Sofuoglu who has had three DNFs so far this season.

Lowes joins names such as Cal Crutchlow and Chaz Davies as British winners of the intermediate production class. Lowes has confirmed he will not be racing in Supersport for 2014 with a desire to progress his career. Lowes’ current team, Yakhnich Motorsport     are looking to run Lowes on an MV Agusta in WSBK however rumours suggest the 23 year old is looking to head to Moto2.

A decision on Lowes’ future is expected soon.