Has Carlos Checa given up? 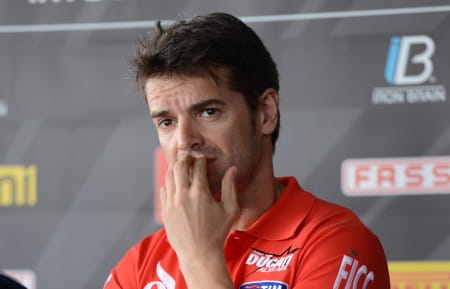 Prior to the 2013 visit to Imola, Ducati’s Carlos Checa had won five out of the last six races at the iconic Italian circuit. This weekend he failed to finish in the top ten aboard his new Ducati Panigale. Aside from taking pole position at the first round in Australia, Checa has had a pretty miserable season and currently sits thirteenth in the championship standings.

A fall in the first race at Philip Island saw him out for the rest of that round and at subsequent rounds Checa complained of a shoulder injury. Three rounds after the accident – at Monza – Checa decided not to ride at all and after twelfth place finish in race one at Donington the 2011 Champion pulled out of the second race. At Portimao, Checa claimed his best result of the season as he rode to sixth in race two.

Ahead of this weekend’s round in Imola, Checa had said that it was the first time he had felt fully fit since Australia. However this has not been reflected in his results. Only in one session this weekend – the first practice session – has Checa finished inside the top ten and in every session he has been outdone by team mate, Badovini who in one session finished fourth.

Many are starting to ponder if this could be the Spaniard’s last season in racing, with some pundits suggesting if current form continues, he may not last the season. All we know is the man plodding around in twelfth place, forty seconds from the leader is a mere shadow of the man who took both wins at this circuit last year… You have to ask, has he given up?