Camier out for two rounds, Hopkins to replace? 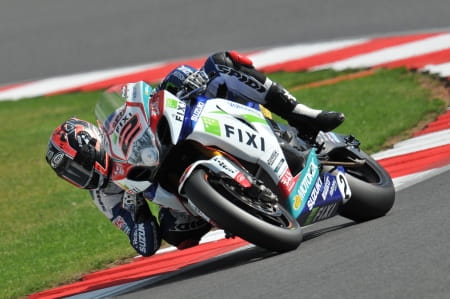 Following an enormous crash in the first Free Practice session at Istanbul, Leon Camier broke his foot in seven places and suffered a hairline fracture to his right ankle. The FIXI Crescent Suzuki rider underwent a short operation last night in which three of his metatarsals were pinned, screwed and wired.

Discharged from hospital this morning, Camier returned to the circuit to see his team. He’ll now fly home to Andorra to begin a thorough rehabilitation, however he isn’t expecting to be back out on track until the final round of the series in Jerez towards the end of October.

Camier commented: “I am obviously really disappointed with what happened yesterday and I’m frustrated that I now have to miss some races. As far as the crash goes, I knew the grip was bad and I was riding accordingly to the conditions. I went through the first left-hander at the top of the hill and the rear just came round on me off the gas – I was really not expecting it to happen! It has left me with seven fractures in the foot and I’ve got wires, pins and screws in there. It was an intricate operation and the surgeon made sure he did the best job he could. We now have to work out how to get the best rehabilitation for it and I’ll be pushing as hard as I can to come back for Jerez.”

It is expected FIXI Crescent Suzuki will replace Camier for the next two rounds, Laguna Seca and Magny Cours, ahead of his planned return at Jerez. While it’s very early days in terms of who’ll take on Camier’s GSX1000R, word in the World Superbike paddock is that it could well be American rider, John Hopkins.

The former MotoGP star rode for Crescent in British Superbikes in 2011 and moved up to the world series with the team in 2012. After a season plagued with injury, Hopkins decided he would take a year out of racing to return to full fitness. Hopkins has maintained a close relationship with the team, just the other week he rode with them at Silverstone for a Suzuki track day.

Carlos Checa and Max Neukirchner were also ruled out of competition at the Turkish circuit with injuries resulting from free practice incidents, with Ayrton Badovini in doubt  as well.