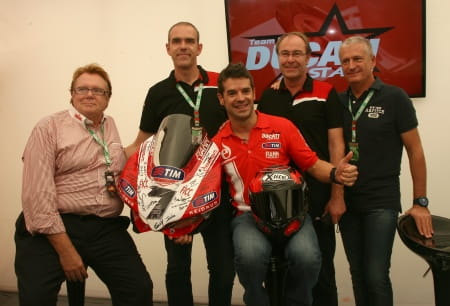 Francis Batta’s Team Alstare has announced they have come to an agreement with Ducati to terminate their partnership one year earlier than planned.

An Alstare press release states the decision was reached following the end of a “very difficult season” in which Ducati and Alstare have been unable to achieve their desired results. The original deal was set to continue to 2014, however Alstare claim the current economic climate and withdrawal of one of the team’s main partners means the outfit must downscale their future plans.

After meeting with Ducati management in Borgo Panigale, it was agreed the best course of action would be an early termination of the agreement before the start of the season.

Ducati SBK Project Manager, Ernesto Marinelli comments: “I am extremely sorry that an operation that had started on such a positive note had to be concluded before its time without achieving the results we were aiming for.”

“This was a very difficult year in terms of sports performance, but I am convinced that it nevertheless made us both grow and lay solid foundations for our future development and improvement. In these months together, I experienced the constant professionalism and expertise of everyone at Team Alstare, and I hope to be able to work with them again in the future. My special thanks, both in my personal capacity and on behalf of the whole company, go to Francis for the effort he has put in this year – as he always has throughout his career.”

Batta added: “I am very sad because this challenge, which began last November, was very important for me as a fresh start after missing one year”

“Working with Ducati was incredibly thrilling, although unfortunately, we failed to achieve the results we had set ourselves. The 2013 racing season has been incredibly hard for us, and being unable to start from a solid position in 2014, I would rather not take risks that might compromise our ability to complete the season. I would like to thank Ducati for trusting me and I wish them all the success that they deserve."

Ducati have confirmed they will participate in the 2014 Superbike World Championship with plans and riders to be announced in the coming days. It is largely expected Ducati will re-join former partners Feel Racing, who more recently have been running BMW’s factory outfit. It is understood Chaz Davies will take one of the 1199 Panigale seats, with rumours of Ben Spies or Leon Camier on the other.

Team Alstare are expected to continue in the World Superbike Championship for 2014 with rumours placing them running either Aprilia or MV Agusta machinery.

Alstare Ducati achieved just one podium in 2013 with Ayrton Badovini in a very wet, pit stop interrupted race in Russia.