Victory for Rossi as Marquez bins it in Misano 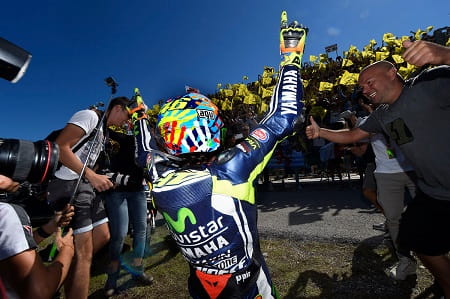 Valentino Rossi stormed to a dominant 107th Grand Prix victory today in Misano after championship leader Marc Marquez crashed out of the race while pursuing his Italian rival.

Lorenzo took the early lead as Rossi and Marquez battled it out for second but it wasn’t long before the Doctor barged his way past his Yamaha team mate with Marquez following suit. With Lorenzo in tow, the pair continued their titanic battle, swapping positions almost every corner.

Under pressure chasing the nine times World Champion, Marquez made his first mistake of the season crashing out of contention on the tenth lap. The Spaniard remounted his Honda but could only manage a solitary point. 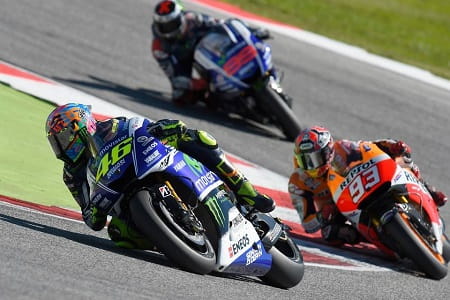 Knowing Lorenzo’s harder tyre could come into play in the closing stages, Rossi kept the hammer down, responding to any progress the Spaniard made to eventually cross the line 1.5 seconds ahead to take his first victory since Assen last year.

Pedrosa completed the podium ahead of Andrea Dovizioso with Iannone fifth. The Tech 3 pairing of Pol Espargaro and Bradley Smith secured sixth and seventh respectively ahead of Alvaro Bautista, Cal Crutchlow and Yonny Hernandez.  Karel Abraham enjoyed a strong ride to eleventh, classifying top open class bike with Aleix Espargaro crashing out on the final lap.

Marc Marquez now has a 74 point championship lead over team mate Dani Pedrosa with five rounds to go. Rossi’s victory sees him close up to just a point behind the second Repsol Honda.