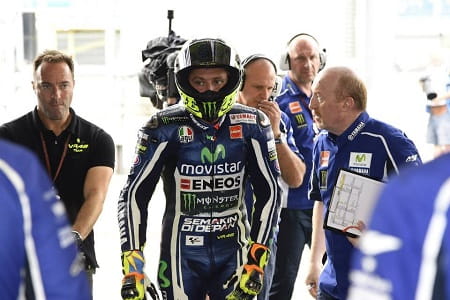 Valentino Rossi has signed a new, two-year deal with Yamaha Factory Racing to compete in MotoGP until the end of the 2016 season.

Rossi’s future had been in doubt after a tough return to Yamaha in 2013 following two difficult seasons with Ducati but the thirty-five year old has this year shown he’s more than capable of running at the front and as such, Yamaha have rewarded him with a new deal.

Rumours circulating towards the end of last season suggested Rossi would choose to hang his leathers up by Mugello had he not been competitive in his second year back with Yamaha. Proving many people wrong, Rossi has without a doubt been the ‘best of the rest’ behind wonder-kid Marc Marquez in 2014, finishing in second place in four of the season's eight races so far.

Rossi becomes the second rider to secure their future in MotoGP with all riders out of contract at the end of 2014. Marc Marquez, who has won all eight races this season, signed a two-year deal with Repsol Honda in May.

It is thought Yamaha will also retain Jorge Lorenzo in an unchanged line-up for the 2015/16 seasons.

Rossi tweeted: "Very happy to announce that I will remain with my M1 and with my guys for the next two years!"