Marquez to remain with Honda until end of 2016 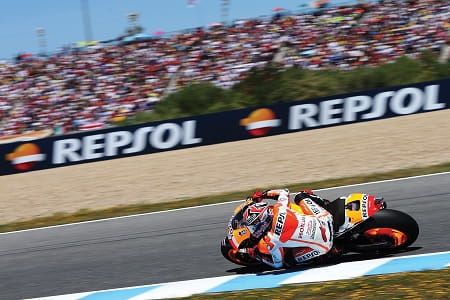 Marc Marquez has penned an extended deal with Honda Racing Corporation through to the end of 2016. In a move that was widely expected, the Spaniard becomes the first large scale Grand Prix rider to secure his ride for the next two years.

Albeit short, Marquez’ time with Repsol Honda has seen incredible success for the twenty-one year old as he became World Champion in his rookie season and smashed numerous records on the way. Marquez has taken twenty podiums out of twenty two races with Honda and so far this year, he has won all four races and it doesn’t look like he’ll be stopped any time soon.

Penning a deal quite early on, it’s clear Marquez feels at home with the Repsol Honda outfit. “I am very happy to announce my renewal with HRC” he said on extending his contract. I had always dreamt about being part of the Repsol Honda Team, and thanks to Honda the dream came true a year and a half ago.

“Everything happened very quickly last season, and I would have never imagined that I could achieve what we did. Becoming World Champion during my first season was another dream turned into reality. It is a great honour to be a part of the Honda family and I’m glad to remain with this special group of people for another two seasons”

It was always known the first seat at Repsol Honda would go to Marquez and the question surrounds who will line up alongside him. Honda reportedly have no issue with keeping hold of Dani Pedrosa, although there’s a train of thought that Jorge Lorenzo could be keen to challenge Marquez on equal machinery. All will be revealed in due course, but don’t expect it to be too soon!