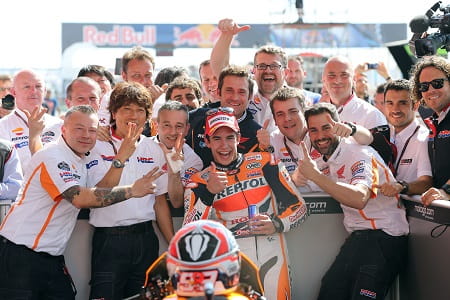 MotoGP headed to Argentina this weekend for the first time since 1999 with the third round of the 2014 season being held at a brand new circuit in Termas di Rio Hondo. As with any new circuit, times tumbled across the weekend with the fastest lap in qualifying around six seconds faster than the times in FP1. Surprising nobody, Marc Marquez stormed to pole position on Saturday setting a time 0.7 faster than his closest rival, Jorge Lorenzo meaning three out of three pole positions for the reigning World Champion this season.

It didn’t all go to plan for Marquez come Sunday though, the Repsol Honda man not getting as good a start as normal and slipping back into fourth place. It was Jorge Lorenzo who took the early lead, this time leaving the line at the right time, but the battle for the lead on the first couple of laps resembled something of a Moto3 race, with riders heading into corners four abreast for the lead as they learned their way around the Argentinian circuit in a race situation. It didn’t take long for Lorenzo to secure his lead, putting the hammer down in his best effort to make up for his blunders so far this season.

The leading pack was formed of Lorenzo, Dovizioso, Iannone, Rossi, Bradl, Pedrosa and Marquez with the battle for second anybody’s in the first three laps. As would be expected, Marquez climbed through the pack to claim second position and begin to chase down Lorenzo by lap six, who had built up a comfortable lead in the early stages. It didn’t take Marquez long to chase Lorenzo down but when he caught the Spaniard he sat behind him for thirteen laps before making a move on lap seventeen to then build a gap of two seconds in just three laps. 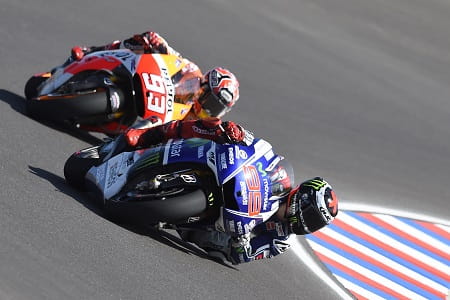 Lorenzo, knowing he had nothing to give in order to chase Marquez down, tried to continue his rhythm to keep hold of second place, but the Repsol Honda of Dani Pedrosa had other ideas. Setting the fastest lap of the race in the late stages, Pedrosa chased down Lorenzo to bag second place and a one-two for his Repsol Honda team. Despite being beaten by both Hondas, Lorenzo was nevertheless extremely happy with his first podium of 2014.

Valentino Rossi, who had been punted wide by Stefan Bradl earlier in the race, took fourth place ahead of the German with Andrea Iannone rounding out the top six as top Ducati after an impressive ride. Bradley Smith finished seventh ahead of his Tech 3 team mate Pol Espargaro and Andrea Dovizioso. Hiroshi Aoyama took the top open spot at the last corner in a battle with Nicky Hayden and Yonny Hernandez. Karel Abraham took thirteenth ahead of Scott Redding, with the Brit suffering from front-end issues throughout the race. Aleix Espargaro took the final point after a crash early on.

Esteve Rabat took the victory in Moto2 ahead of Xavier Simeon and Luis Salom while a four way battle for the lead in Moto3 saw Romano Fentati barge Alex Marquez and Jack Miller out of the way in the penultimate corner to take the victory. Marquez recovered to take second with a lucky Miller in third, crossing the line on the grass. Birthday boy Livio Loi took a career-best fourth place for the MarcVDS team.