Marquez: "I hope Redding is on a factory Honda!" 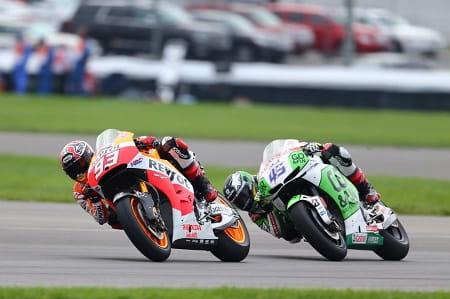 Marc Marquez has said he’d like to see Bike Social-backed Scott Redding on a factory Honda RC213V in 2015 as he thinks the British rider has the potential to challenge towards the front.

Redding has been racing in MotoGP’s open category this year and with a clear power deficit, the Brit has been unable to compete with the factory bikes including former Moto2 rival Marquez. However the twenty-one year old is tipped to be taking over Alvaro Bautista’s seat at Gresini Honda for 2015, a move that Marquez reckons would be good for the 2013 Moto2 runner up.

Redding fought with Marquez in the 2011 and 2012 Moto2 seasons giving the Spaniard a good run for his money on several occasions.

“I hope Scott is on a factory Honda next year as I think he’s got good potential” said Marquez speaking to Bike Social ahead of Silverstone.

“I enjoyed riding with him in Moto2, he’s a really good rider, really aggressive and keeps pushing all the time and that’s what I like in people fighting with me. I would like to see him on the factory bike because in the open category, even though it will be better next year, you know that you are in that category and you know that you cannot fight every race with the top guys. On a factory bike you can and for Scott I think this is important.”

Bike Social will be bringing you all the latest news and gossip from the 2014 British Grand Prix at Silverstone this weekend!

MotoGP comes to Silverstone for race weekend on August 29th, coverage starts from Friday at 08:30 and continues through to 16:00 on Sunday, shown exclusively live on BT Sport