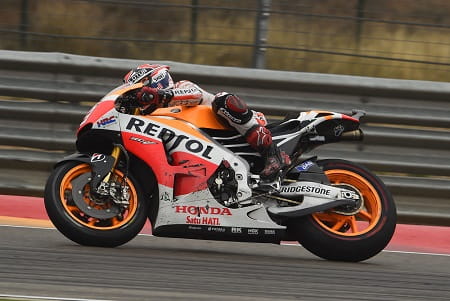 Marc Marquez has admitted he opted for the wrong strategy in Sunday’s MotoGP race after dramatically crashing out in worsening conditions as he attempted to complete the final few laps on slick tyres.

The rain flags came out with ten laps to go but it wasn’t until the final five laps that the conditions significantly deteriorated. Andrea Dovizioso was the first victim, crashing out on what he says was the lap he’d planned to pit-in to change bikes.

At the front, Marquez and team mate Dani Pedrosa opted to stay out in an effort to complete the race. Tip toeing around the Motorland Aragon circuit, the Repsol Honda duo were caught out shortly after main rival Jorge Lorenzo entered the pits. Pedrosa was the first to lose his RC213V coming into turn one with Marquez slipping off just a few turns later.

“Today's race was difficult because I, like many other riders in MotoGP, had never experienced track conditions like this before” said Marquez after the race. “It was a shame that it started to rain; if it hadn't, then I think that Dani, Jorge and I would have made the end of the race really exciting for the fans. I think that we did a good job all weekend - it was just a pity about the crash. I tried to hold on because there were only a few laps remaining, but today I learned that in these situations it is better to use a different strategy.”

Both Marquez and Pedrosa managed to re-mount their Hondas before wobbling to the pits to change to their wet set-up bikes. Finishing one place ahead of Pedrosa, Marquez managed to extend his championship lead by a point meaning he can clinch the title in Motegi should he finish ahead of his teammate.