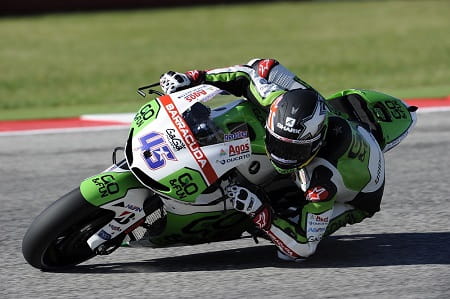 Scott Redding will ride a factory Honda RC213V in MotoGP next season as he returns to the MarcVDS Racing outfit for the team’s premier class debut.

After missing out on the Moto2 title to Pol Espargaro in 2013, Redding has impressed this year aboard the largely uncompetitive production Honda RCV1000R. Having moved up to MotoGP on a two-year deal including the option for a factory bike in 2015, the Brit’s future had looked sorted but with his Gresini team struggling to find the necessary funds to secure the final factory-spec Honda, things were soon cast into doubt.

Honda gave Gresini until this weekend to stump up the cash for Redding’s factory bike but with the Italian outfit confirming a switch to Aprilia on Friday, the Gresini option was not meant to be for the Brit.

Also searching for the funds to put Redding on a factory Honda was his former Moto2 team, MarcVDS Racing. Michael Bartholemy, MarcVDS Team Principal (and Redding’s personal manager) told Bike Social two weeks ago that come Misano they would need to be in a position to assure HRC they could run the bike should Gresini opt not to.

Following Sunday’s MotoGP race, MarcVDS confirmed via Twitter that they will step up to MotoGP with Redding in 2015 having signed a three-year agreement with Honda Racing Corporation. Redding will race a full factory-spec RC213V almost if not identical to the one ridden by MotoGP World Champion Marc Marquez.