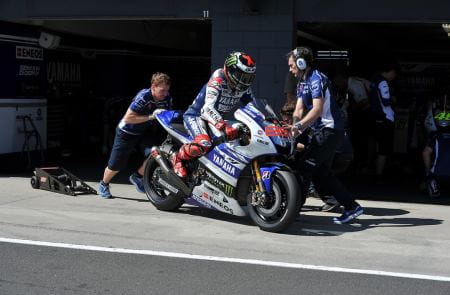 Jorge Lorenzo remained on top of the timesheets on the second day of the Phillip Island MotoGP tyre test while Tito Rabat continued to impress out of the Moto2 riders present.

All of the factory MotoGP riders and four representatives from the Moto2 class are in Australia to test tyres for Bridgestone and Dunlop respectively. The test comes after both tyre manufacturers were caught off guard at the 2013 Australian Grand Prix as it became clear neither the MotoGP nor Moto2 tyres could last full race distance.

Both Bridgestone and Dunlop arrived at Phillip Island with various combinations of tyres for riders to test, with the aim being to whittle down the selection to a couple of preferred options before testing these in long runs to allow the manufacturer to provide an optimal tyre selection come October’s Grand Prix.

With Australia currently in the height of summer, temperatures are much higher than they will be in October and with it reaching almost 50 degrees today, riders found it tough to put in full race distance with everyone put Pedrosa managing a longest run of fourteen laps.

Jorge Lorenzo was seen on circuit with a new-look black faring on his Yamaha M1. The Spaniard claimed Phillip Island’s characteristic winds hindered his riding last year and asked Yamaha to look into a solution. The new front faring is smaller than the one usually seen on the M1 but with a larger air intake.

Dani Pedrosa set the second fastest time, some three tenths off Lorenzo’s pace with Ducati’s Dovizioso in third, just a few hundredths of the Honda man. Valentino Rossi set the fourth fastest time, four tenths from his team mate with Crutchlow rounding out the MotoGP riders in fifth, some half a second behind. World Champion, Marc Marquez is sitting out the test after breaking his leg in a flat-track incident the other week.

Marc VDS’ Tito Rabat enjoyed a strong second day in the Moto2 class, smashing the Phillip Island lap record with a time almost half a second quicker than Pol Espargaro’s pole position last year. It’s rare that Moto2 machines will share a circuit with the faster MotoGP bikes therefore the times are making an interesting comparison, Rabat was third fastest out of all bikes on track in terms of corner speed! Rabat’s Marc VDS team mate, Mika Kallio set the second fastest Moto2 time, despite having suffered a wrist injury during a fall yesterday. Aspar’s pairing of Nico Terol, who fell at the MG hairpin unhurt, and Jordi Torres rounded out the field as Dunlop continue to evaluate nine tyre specifications.

Bridgestone claim its already narrowed down to three choices of tyre with the firm looking to progress with two of these. Testing continues tomorrow.

View a report and times from Day 1 here.